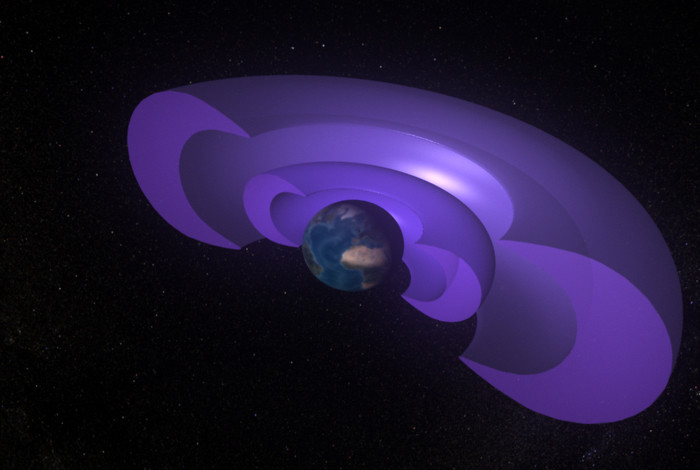 An artist’s rendering of the Van Allen radiation belts surrounding Earth. The purple, concentric shells represent the inner and outer belts. They completely encircle Earth, but have been cut away in this image to show detail. Credit: NASA’s Conceptual Image Lab/Walt Feimer

LOS ALAMOS, N.M., April 9, 2019— A new, first-of-its-kind space weather model reliably predicts space storms of high-energy particles that are harmful to many satellites and spacecraft orbiting in the Earth’s outer radiation belt. A paper recently published in the journal Space Weather details how the model can accurately give a one-day warning prior to a space storm of ultra-high-speed electrons, often referred to as “killer” electrons because of the damage they can do to spacecraft such as navigation, communications, and weather monitoring satellites. This is the first time researchers have successfully predicted those killer electrons across the whole outer belt region.

“Society’s growing reliance on modern-technology infrastructures makes us especially vulnerable to space weather threats,” said Yue Chen, a space scientist at Los Alamos National Laboratory and lead author of the study. “If our GPS or communications satellites fail, it could have wide-reaching, negative impacts on everything from air travel to bank transactions. So being able to accurately predict space weather has been a goal for a long time. This model is a firm step towards being able to do that.”

At the Earth’s equator, the outer radiation belt—also called the outer Van Allen belt—begins approximately 8,000 miles above the Earth and ends beyond 30,000 miles. High-speed high-energy electrons inside this belt are known for their high variability, especially during solar storms, when new particles from the sun enter the Earth’s space environment—making them extremely difficult to predict.

This model takes the unique approach of connecting the dots between the killer electron population and the measurements made by a Los Alamos National Laboratory geosynchronous equatorial orbiting satellite, as well as a National Oceanic and Atmospheric Administration satellite in low-Earth orbit within a 3.5-year period. By establishing a correlation between the electrons and satellite measurements in low-Earth orbit, Chen and his colleagues were able to identify the informational triggers needed for predictions and develop a reliable model to forecast changes of high-energy electrons within the outer belt.

“We’re very excited about the potential for future enhancements to this model,” said Chen. “The more research and refinements we do, the increased potential for us to have more reliable forecasts with longer warning time before the arrival of new killer electrons.”