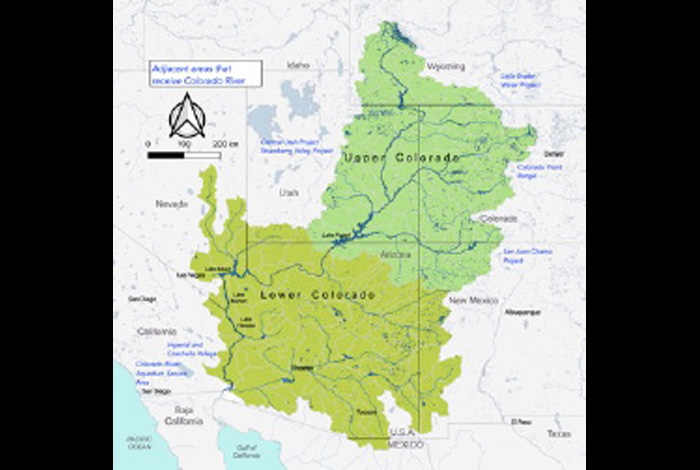 Extreme hydrological/climatological events across the Colorado River basin should be studied together, not in isolation, to get a clearer picture of their devastating impacts in years to come.

LOS ALAMOS, N.M., April 7, 2021—In the vast Colorado River basin, climate change is driving extreme, interconnected events among earth-system elements such as weather and water. These events are becoming both more frequent and more intense and are best studied together, rather than in isolation, according to new research.

“We found that concurrent extreme hydroclimate events, such as high temperatures and unseasonable rain that quickly melt mountain snowpack to cause downstream floods, are projected to increase and intensify within several critical regions of the Colorado River basin,” said Katrina Bennett, a hydrologist at Los Alamos National Laboratory and lead author of the paper in the journal Water. “Concurrent extreme events of more than one kind, rather than isolated events of a single type, will be the ones that actually harm people, society, and the economy.”

Another example of concurrent hydroclimate events might be low precipitation accompanied by high temperatures, which cause drought as an impact. Other factors such as low soil moisture or wildfire burn scars on steep slopes contribute to impacts.

“You never have just a big precipitation event that causes a big flood,” Bennett said. “It results from a combination of impacts, such as fire, topography, and whether it was a wet or dry summer. That’s the way we need to start thinking about these events.”

Using indicators such as maximum temperature, maximum precipitation, dry days, maximum and minimum streamflow, maximum and minimum soil moisture, and maximum evapotranspiration, the team ran the models for a historical period (1970-1999) and a projected future period (2070-2099). They studied the difference between the two periods (future minus historical) for events at four time scales: daily, monthly, seasonal, and annual.

Overall, precipitation across the Colorado increased by 2.1 millimeters between the future and historical periods, with some models showing increases in precipitation and some showing decreases. Nonetheless, the team found that in all cases, precipitation changes still drove an increase in concurrent extreme events.

Unsurprisingly, temperature increased across all six models and was an even stronger catalyst of events. Consistently across the entire basin, the study found an average temperature rise of 5.5 degrees Celsius between the future and historical periods.

In every scenario, the number and magnitude of each type of extreme event increased on average across the Colorado River Basin for the future period compared to the historical period. These numbers were given as a statistical expression of the change in frequency between the historical and future period, not as a count of discrete events.

Those increases have significant social, economic, and environmental implications for the entire region, which is a major economic engine for the United States. The study identified four critical watersheds in the Colorado basin — the Blue River basin, Uncompahgre, East Taylor, Salt/Verde watersheds — that are home to important water infrastructures, water resources, and hydrological research that would be particularly vulnerable to extreme events in the future.

More than 40 million people depend on the Colorado River basin for water, and it directly supports $1.4 trillion in agricultural and commercial activity — roughly 1/13 of the U.S. economy, according to 2014 figures.