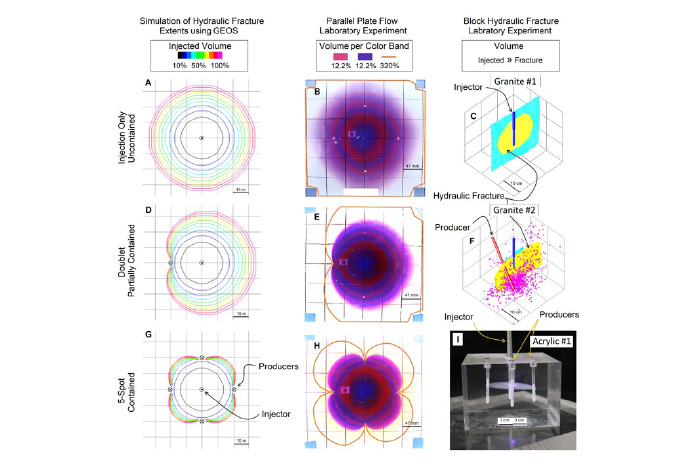 Demonstration of fracture caging versus conventional single and doublet well designs. Numerical models, plate flow experiments, and rock fracture tests all confirm the ability of a well cage to halt new fracture growth and intercept high-pressure flowing fluids before they leak into the surroundings. Before this work, it was incorrectly believed that a small well could not halt a large fracture.

"We call it 'fracture caging,'" said Luke Frash, a Los Alamos researcher on the project. "This term is fitting because the method looks quite like an underground cage where, instead of iron bars, we have boundary wells that contain high-pressure injected fluids to prevent large quakes."

"Unlike conventional thinking, we seek to control where subsurface fluids can't go, instead of trying to predict where they will. As evident from our preliminary tests, we were surprised, but fortunate, to observe that tiny wells can halt large fractures, so only a small number of sparse wells are needed to create a 'cage.'"

Frash said: "This method will help avoid a repeat of the disruption caused by saltwater disposal wells in Oklahoma or the civil property damage that was linked to a geothermal well in Pohang, South Korea. The method enables safer, more efficient, and more sustainable development of subsurface energy resources than what was achievable using conventional methods."

Fracture caging involves drilling a tactical pattern of boundary wells around a subterranean resource, such as a geothermal hotspot, to contain fluid flow in fractured rock. These wells intercept the fractures and fluid flow from injection wells before it can leak away to trigger earthquakes or contaminate the environment.

"A key component of caging is to directly consider the complex, dynamic, and unpredictable nature of localized fluid flow in fracture dominated rocks," said Frash, "rather than attempting to treat the system as a simplified media when we lack data to know otherwise."

Unlike conventional methods, caging permits high-pressure fluid injection at any rate or pressure while still also preventing the large ground shakes. This offers a massive step change for increasing safe access to and reliable utilization of the nation’s largely untapped geothermal energy reserves. "It could be the key to unlocking more than 60 GWe of new geothermal energy production," Frash said.

The Los Alamos team collaborated with eight national laboratories, four industrial partners, and seven universities to spearhead the fracture caging concept. The team completed the first laboratory tests that successfully demonstrated the concept in a variety of natural rocks and engineered materials.

In 2017, the Department of Energy’s Geothermal Technologies Office (GTO) funded National Laboratories to focus on GTO’s vision for longer-term, transformational enhanced geothermal systems (EGS), establishing a collaborative experimental and model validation initiative: the EGS Collab Project. As part of the most recent phase of the project, a decameter scale test is now underway at the Sanford Underground Research Facility (SURF) that will use fracture caging in the field for the first time.

Funding: This research was funded by the Department of Energy’s Office of Science Basic Energy Sciences Program. The EGS Collab work in this study is supported by the U.S. Department of Energy, Office of Energy Efficiency and Renewable Energy (EERE), Geothermal Technologies Office (GTO) with Lawrence Berkeley National Laboratory. Research supporting this work took place in whole or in part at the Sanford Underground Research Facility in Lead, South Dakota. The assistance of the Sanford Underground Research Facility and its personnel in providing physical access and general logistical and technical support is gratefully acknowledged.