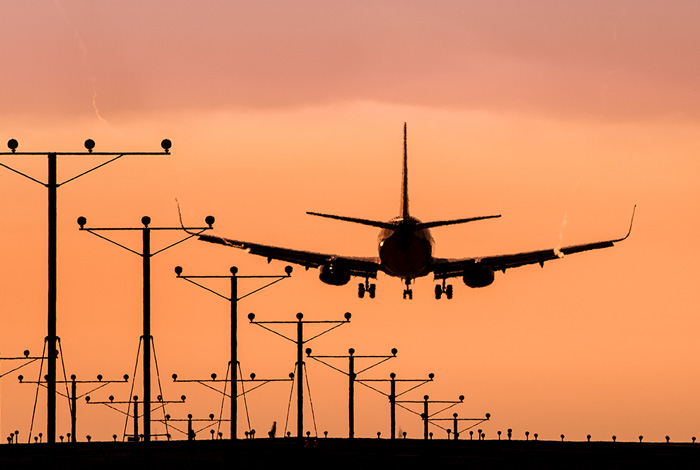 LOS ALAMOS, N.M., March 31, 2021—A new technology developed by Los Alamos National Laboratory and Honeywell is providing needed atmospheric environment information to the aerospace industry. The device, called TinMan, has quantified the number of thermal neutrons, particles created by natural solar radiation—giving the aerospace industry a standard by which it can evaluate its semiconductor parts.

“Few studies have been conducted related to the impacts of thermal neutrons on aircraft, and no one has been able to define their intensity inside planes,” said Stephen Wender, an instrument scientist in the Los Alamos Neutron Science Center. “It wasn’t until recently that they were theorized to pose an impact on component reliability.”

The world has known about these atmospheric radiation impacts since the 1960s. As solar radiation hits the atmosphere, it showers particles onto the Earth, including protons, electrons, and heavy ions, and also produces high-energy neutrons. But unlike protons and electrons, neutrons aren’t charged and can pass through the atmosphere and solid objects like the metal hull of a plane. When these neutrons strike something like a microprocessor, the energy it deposits in the system can result in a single effect event, which may impact component reliability.

Thermal neutrons have recently been studied after the semiconductor manufacturing industry, which produces semiconductor electronics, began using a metal called boron in its parts. Boron-10 is an isotope of boron and is known to be sensitive to thermal neutrons.

“Measuring the thermal neutron environment at altitude provides an important piece of information for the aerospace industry,” said Laura Dominik, a fellow with Honeywell. “We’re pleased that this joint project, over the course of more than a dozen flights, has now delivered the most accurate measurement to date of this particle type in aircraft.”

TinMan is a small device, a little thicker than a laptop, and is the only thermal neutron detector designed for use in an airplane. Its goal was to ride along on a series of flights, constantly measuring changes in thermal neutron intensity, which can fluctuate with aircraft altitude and latitude. These measurements would then be used to define the thermal neutron environment in aircraft, a necessary step to evaluate semiconductor electronics with boron-10.

In the past two years, TinMan has accompanied 14 NASA flights. Throughout these trips, TinMan was able to track thermal neutron intensity during various altitude and latitude changes on flights in the United States and in Europe. TinMan has defined the environment of thermal neutron intensity, data that has now been distributed to international agencies and included in reports to ensure electronics with boron-10 can be properly evaluated for use in aircraft.

“We’re very excited to provide a comprehensive set of measurements of the thermal neutron environment in aircraft,” Wender said. “As changes in manufacturing continue, this information will establish an important baseline used to evaluate semiconductor parts for the entire aerospace industry.”