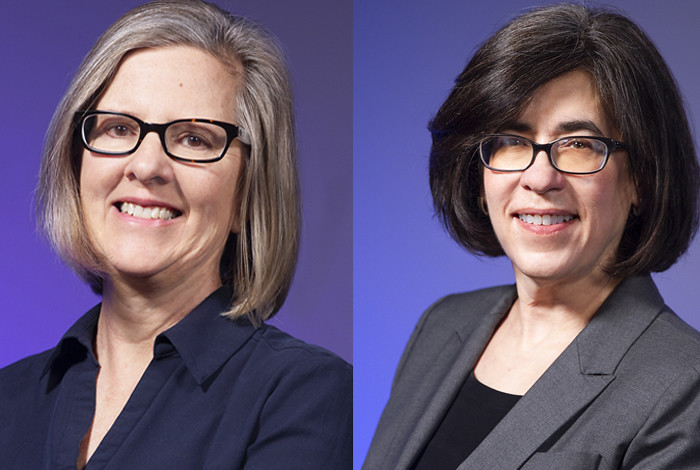 LOS ALAMOS, N.M., March 28, 2019—Two researchers from Los Alamos National Laboratory were recognized with 2019 Women in Technology Awards by the New Mexico Technology Council. Janette Frigo, an electrical engineer with the Laboratory’s Intelligence and Space Research division, and Laura Monroe, a mathematician with the Laboratory’s High-Performance Computing division, were recognized for their exceptional work in the STEM fields, their commitment to community and mentoring other women.

“Janette and Laura exemplify qualities that our Laboratory holds in the highest esteem: outstanding work in their fields and giving back to the community,” said Thom Mason, director of Los Alamos National Laboratory. “They have made significant contributions through their innovative work in sensor technology and computing while creating opportunities for the next generation of women in science and engineering by willingly mentoring both girls and women in their fields.”

Frigo is the chief innovator behind an award-winning long-range wireless sensor network that allows multiple sensors to talk to each other over vast distances and in harsh environmental conditions. It has broad applications in environmental management, ranching, the security industry and a myriad of others.

When Frigo first joined Los Alamos in 1997, she was one of only three female technical staff members out of about a hundred in her organization—roughly equivalent to the percentage of women in her engineering graduating class. Since then, she has made it a priority to expand opportunities for women in science and math. For example, she is a longstanding leader and contributor to the women-led Expanding Your Horizon’s conference that exposes middle and high school students from all ethnic and socioeconomic backgrounds to STEM fields through hands-on workshops and science and career fairs. Frigo is a graduate of Arizona State University.

Monroe has spent most of her career focused on unconventional approaches to difficult computing problems, specifically researching new technologies that will enable better performance as processor-manufacturing techniques reach the limits of the atomic scale, also known as the end of Moore’s Law. Monroe, who joined Los Alamos in 2000, originated and leads the Laboratory’s inexact computing project that is meant to address Moore’s Law challenges in a unique way. The results will have far-reaching implications nationally and internationally.

Monroe is also committed to both recruiting women to the computing field and helping them succeed when they are there. More than half of the interns she has hired have been women, and women make up about 30 percent of her computing project team, which is particularly noteworthy given that computer science tends to be a very male-dominated field. Monroe is a graduate of the University of Illinois at Chicago.

Both women, along with seven others, were recognized this morning at the Annual Women in Technology Celebration in Albuquerque.