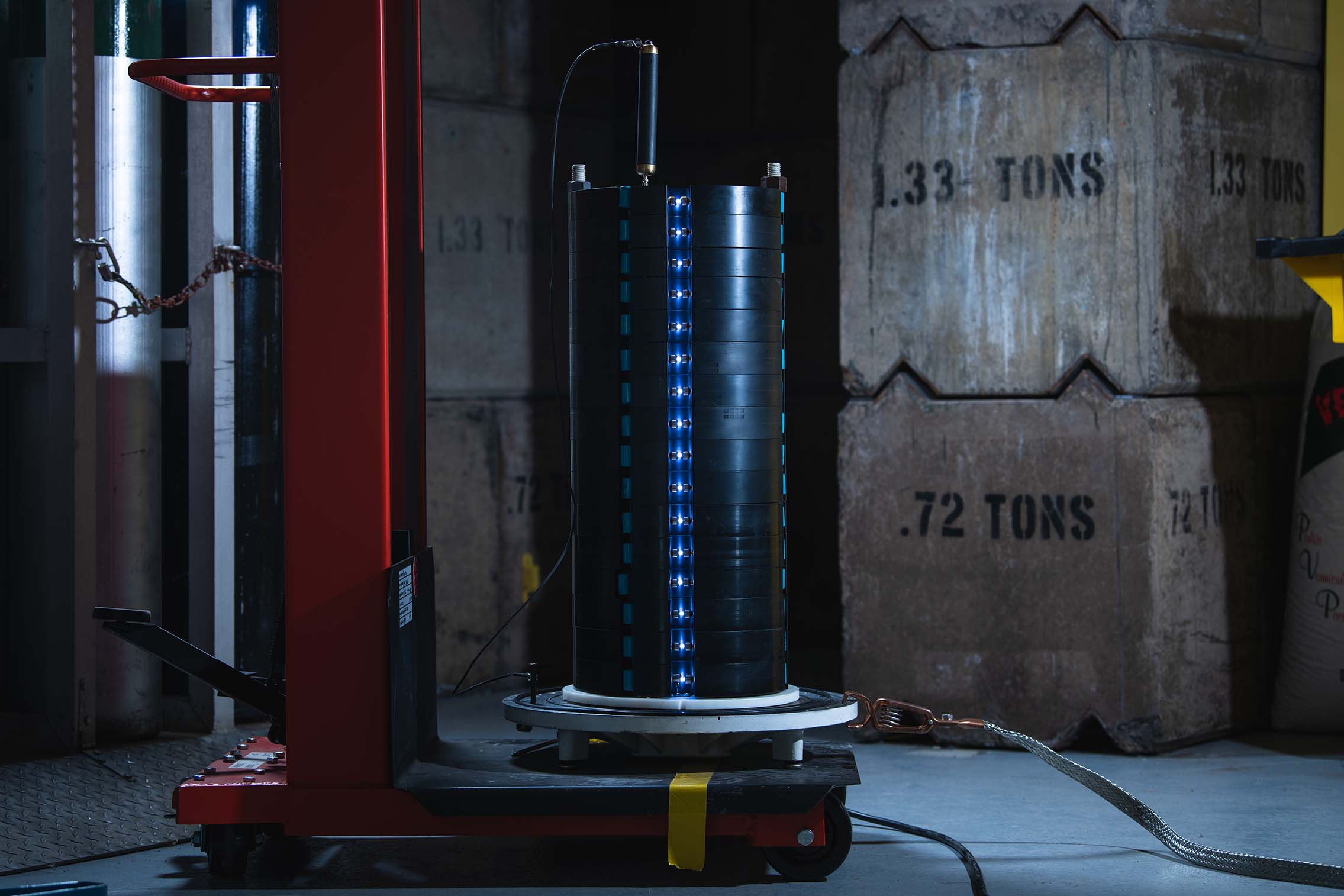 The newly designed K-modules are expected to generate approximately 3.3 million volts and 10 thousand amperes, resulting in 33 gigawatts of peak power for 20 nanoseconds.

In the cutting-edge science of national security, where a fast-evolving understanding of materials and physical processes is critical to applications, a middle-aged technology is at the center of the action. The size of a small sport-utility vehicle and shaped like a barrel, devices called Febetrons generate X-rays to photograph objects that are moving at extremely high speeds as part of a detonation and allow the measurement of their position, speed, shape and internal density profiles. Powering the Febetrons are capacitor modules, a technology that had not seen a design update in more than 40 years, until a Los Alamos National Laboratory research team developed a new “K-module” device.

“Capacitor modules are like the automobile engines of these Febetron devices,” said Kalpak Dighe, project leader in the pulsed power systems team. “That means the Febetron user community is stuck driving with an engine that hasn’t changed in four decades. What we’ve done is completely redesign the engine, with all the benefits of up-to-date performance, reliability and efficiency.”

X-ray devices also have civilian uses, and the newly developed capacitor module technology could be adapted to medical imaging devices, as well as applications in the petrochemical, energy and aerospace sectors. But the technology is especially critical to national security missions. Accordingly, about three-quarter of flash radiography users are Department of Defense and Department of Energy laboratories. Radiographic data and images are used to constrain computer models for materials behavior in high-temperature and high-pressure regimes.

When horizontally stacked in a capacitor bank (also called a Marx bank) inside a Febetron, disc-shaped capacitor modules store and deliver pulsed power to an anode-cathode (A-K) gap to produce an X-ray. The 80-modules-long bank multiplies the voltage as the charge accelerates through the stack, races toward the A-K gap and releases X-rays. Aimed at, and timed with a detonation, the X-rays can image processes occurring during the blast – essential information for understanding and improving weapons mechanisms. The more powerful the X-rays, the deeper they can penetrate the detonation activity to “see” details in the materials.

Initiating design work two years ago, Dighe and his team worked through several prototypes to revamp and optimize module design. Research technologist Robert Sedillo was instrumental in assembling K-modules with next-generation components such as higher-voltage capacitors and resistors capable of withstanding high-energy impulses, helping deliver increased performance and reliability. The ladder design of the circuit switches – as opposed to the side-by-side design of current modules – contributes to the increased efficiency of current flow through the capacitor bank during discharge. The redesigned robust electrical connections between adjacent modules prevent arcing. Technicians Timothy Byers and John Wilson helped Dighe in planning and executing laboratory tests to validate performance of the K-modules.

Compared to current modules, which generate approximately 2 million volts, K-modules substantially increase the output voltage and power of flash X-ray devices. The newly designed K-modules are expected to generate approximately 3.3 million volts and 10 thousand amperes, resulting in 33 gigawatts of peak power for 20 nanoseconds. This increase in output voltage will also increase the X-ray spectra, in other words, the energy of the accelerated photons, allowing the X-rays to penetrate farther through material and provide better contrast, thus clarity, in the radiographs. Those capabilities are especially valuable in imaging high-Z elements, elements with a high atomic number (Z) of protons in the nucleus. The K-modules will also increase electron flux on target when installed in electron beam devices. Febetrons that generate electron beams are used to characterize radiation effects on high-value electronic circuits such as in missile guidance systems, space vehicles and satellite payloads.

In addition to performance constraints, the reliability of the current-generation capacitor modules is limited – picture an early 1980s vehicle that, four decades on, can’t always be trusted to get from point A to point B. In the X-ray Calibration Laboratory at Los Alamos, Dighe can point to a current-technology module that lasted only 39 shots instead of the 3,000 that should be its life expectancy. With circuitry encased by epoxy inside a plastic shell, the current-generation modules are vulnerable to internal damage from possible arcing. In initial field testing over the past two years, through approximately 400 shots, the K-modules have maintained their efficiency and continue performing reliably.

There are no fixes for a current-generation module; even a pinhole defect spells the end of the road for it. Ordering a replacement may incur a delay of months or even a year, representing a constant menace to experiment schedules, and the considerable investment of time and resources tied up in those schedules. In contrast, K-modules are user-serviceable. The commercial-off-the-shelf components are accessible and can readily be replaced, making repair a viable option versus discarding a module. In addition, the majority of K-module components are recyclable.

K-modules were developed specifically for Febetrons, and they can find immediate application in those machines. But pulsed-power capacitor module technology could also be used in X-ray devices for the sterilization of medical devices, healthcare products (such as syringes, gloves, oxygen tubing, etc.) and pharmaceuticals. K-modules may find applications in portable X-ray devices used in the aerospace and oil and gas industries for structural defects or fracture detection. Similarly, K-modules could find applications in electron-beam devices used in the food packaging industry to kill microorganisms such as E. coli and salmonella. Electromagnetic pulse applications could also be viable, for example, to test for radiation hardening of military targets, or using devices to calibrate sophisticated but remote equipment, such as satellites.

The customizable fabrication of the K-modules leaves the door open for many possible applications – there are, after all, many cars on the road. Now they finally have a choice of engine.