A tool for modeling changes in sea ice 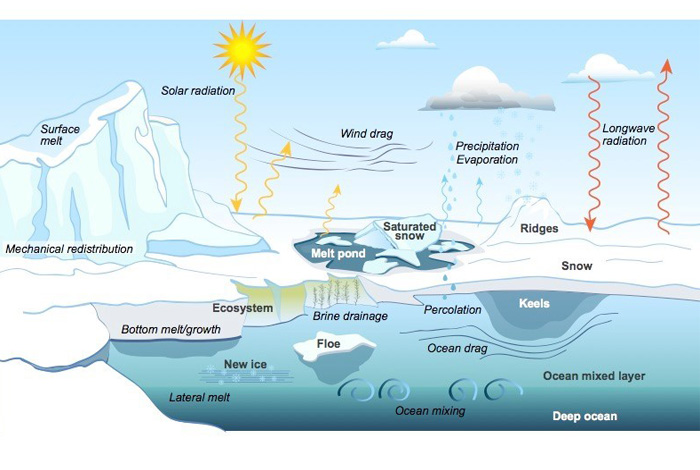 A CICE Consortium graphic of sea-ice physics illustrates the complexity and breadth of variables at play.

The Polar Regions on Earth—the areas around the North and South Poles—have about 9 million square miles of sea ice floating in their oceans. Once inhabited by very few people, the Polar Regions are now home to more people than ever before; there are more than 4 million people living in the Arctic. These regions are important to industries such as commercial shipping and fishing, mining, energy, recreation and tourism, scientific research, and even military bases and defense operations. Given this, the need to understand how changing sea ice can impact these activities is critical.

Particularly in the Arctic, sea ice complicates navigating shipping channels and impacts the safety of naval submarines. Furthermore, diminishing ice—a consequence of climate change—can impact the lives of people living in the region.

To support these industries and people, researchers use satellites, aircraft, and ships to collect data on sea ice, such as how far it extends, its thickness, and its brightness. From this data, scientists then develop computer models to forecast the spread and thickness of the ice, providing insight into how sea ice interacts with Earth’s climate.

With funding from the Department of Energy, a Los Alamos National Laboratory team developed a software package known as CICE that calculates the complex physics of sea ice, such as how it freezes, melts, and moves across the ocean’s surface, and how it is influenced by external forces such as the ocean’s currents and winds.  Research and forecasting organizations in more than 20 countries have incorporated CICE into their work. The software program is managed by the CICE Consortium, an international group of institutions formed to maintain and develop CICE in the public domain.

By ingesting observed data, CICE is able to accurately predict near-term sea ice conditions, which is a useful tool for those who operate in the region. For example, the U.S. Navy uses CICE to produce predictions of the ice after it is linked with other ocean and atmospheric computer models, and then submits those predictions to the National Oceanic and Atmospheric Administration and the U.S. National Ice Center to be distributed as part of their environmental forecast products.

While monitoring sea ice supports various activities and industries around the poles, the software is also helping scientists around the world to better understand how sea ice influences climate. CICE can model the complex interactions between sea ice, the atmosphere, and the ocean, which are needed to create accurate projections of what the earth system might do over periods of hundreds of years.

For example, changes in the amount of sea ice can alter the global “conveyor belt” of heat. When sea ice forms, most of the salt from the freezing seawater drains into the ocean below. Now denser from all that salt, the water below the ice sinks deeper into the ocean and migrates toward the equator while warmer, equatorial waters circulate into the polar regions. The relatively fresh ice moves to other locations, and as it melts it suppresses the ocean’s circulation by capping the ocean with a lightweight layer of fresher meltwater.

CICE has also provided insight into how disappearing sea ice influences the northern hemisphere polar vortex, causing its dynamics to change. This is happening because as the sea ice cover retreats, the ocean warms more from solar energy, which in turn warms the entire region.  That decreases the temperature difference between the warm tropics and the cooler Arctic, which is what has historically confined the polar vortex dynamics to higher latitude regions. Slower, more meandering jet streams and massive intrusions of cold air into mid latitudes, along with intrusions of warmer air into the Arctic region, further destabilizes the ice.

By using CICE to study how sea ice grows and melts, moves, and interacts with global climate patterns, scientists can better understand how sea ice helps modulate the global climate—and, in doing so, gives them the tools to plan and adapt accordingly.