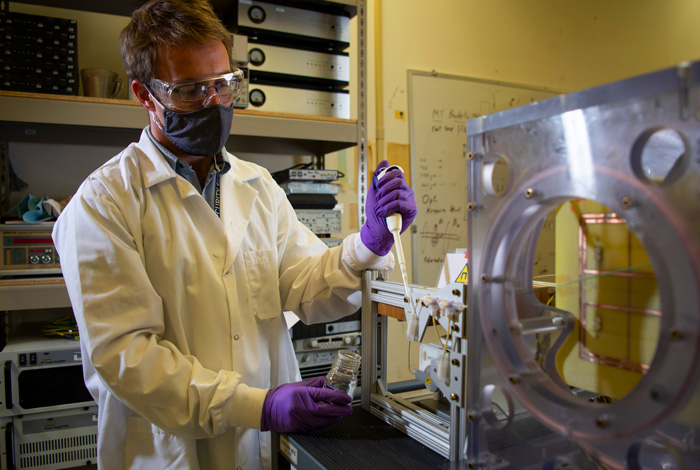 Derrick Kaseman works on the ERDE device, which uses the Earth’s magnetic field to measure the unique signatures of chemicals. This portable instrument is about the size of a microwave.

LOS ALAMOS, N.M., March 15, 2021—A Los Alamos National Laboratory-designed spectroscopy instrument allows scientists, industry, and governments to decipher even trace amounts of chemicals using the Earth’s own magnetic field. Called the Earth-field Resonance Detection and Evaluation device (ERDE, which is German for “Earth”), the instrument is the most sensitive, affordable, and portable technology of its kind, with the ability to detect a range of chemicals, including those commonly used in scientific labs, biological weapons, and even slight traces of insecticides in drinking water.

“Using the Earth’s magnetic field allows us to do several things that were not possible before,” said Derrick Kaseman, a scientist at Los Alamos and ERDE project co-lead. “It provides a perfect magnetic environment for highly accurate detection and identification of chemicals while allowing the spectrometer to be much smaller and, therefore, easily portable compared to other spectrometers currently available on the market that do similar detailed analyses.”

ERDE operates much like a magnetic resonance imaging machine, or MRI, commonly found at hospitals. MRIs use large magnetic fields to map chemical compounds in the body, mostly water. This can be done because the nuclei of some molecules, like the hydrogens in H2O, spin at particular speeds in magnetic fields. Depending on the location of the hydrogen atoms in the body (such as body fat vs. muscle) and what they are chemically bound to (like the oxygen in H2O) their speeds will differ, which allows the MRI magnet to respond to their unique frequency. The result is a detailed image of the chemical compounds that make up organs, tissue, and other biological material.

ERDE works similarly, except that it senses chemical compounds in a much smaller volume. The ERDE spectroscopy instrument, a little larger than a microwave, works by passing the sample through a small set of magnets, which helps to build the signal in the spinning nuclei. The chemical sample is rapidly moved into a small box that harnesses the Earth’s natural magnetic field. This is the same force that directs a compass needle to point north. The interaction of the chemical with earth’s magnetic field is then detected.

Current spectroscopic technologies use only permanent magnets for portability, making them much less sensitive to chemical detection. Highly sensitive spectrometers that use superconducting magnets, like an MRI, are too large to be portable, sometimes as large as two stories tall. Although they’re highly accurate, they rely on limited and expensive cryogenic liquids like helium and nitrogen, which are not portable.

ERDE, however, is easily used in multiple settings such as on a workbench in a laboratory where scientists can test the chemical compounds they’ve developed. It can be deployed to areas where the use of chemical weapons by a government, terrorist group, or assassin is suspected, as was the case recently during the Syrian civil war or the Skripal and Navalny poisonings.

ERDE also easily allows regulators to ensure a company is only using approved chemicals in a product. Additionally, it can continuously monitor tap water through pipes at a pumping station to prevent chemical compounds used in pesticides and other toxic materials from entering people’s homes.