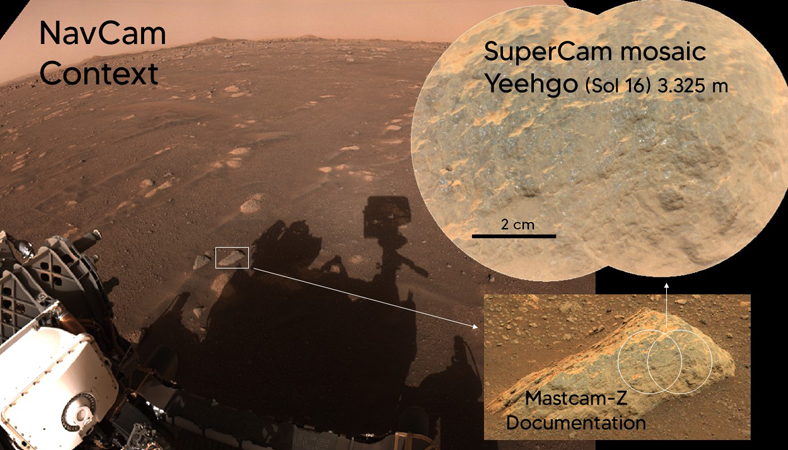 LOS ALAMOS, N.M., March 11, 2021—Following the successful landing of NASA's Perseverance rover in Jezero Crater on Mars, the SuperCam operational teams at Los Alamos National Laboratory and the French National Centre for Space Studies (CNES) received the first results showing that SuperCam is in good health and giving its first impressions of the crater.

“It’s amazing to see SuperCam working so well on Mars,” said Roger Wiens, the lead scientist on SuperCam at Los Alamos. “When we first dreamed up this instrument eight years ago, we worried that we were being way too ambitious. Now it’s up there working like a charm.”

Located at the top of the Perseverance rover’s mast, SuperCam is currently undergoing a series of tests designed to verify its systems’ operating status. The tests are part of an overall rover check-out phase that will last nearly three months. The data collected by the engineers and scientists at the controls of SuperCam provide a very positive assessment of its health and capabilities.

Hailed by NASA as a “Swiss Army knife” of instruments, SuperCam brings together five remote techniques intended to study the geology of Mars and help select samples that will be collected by the mission.

SuperCam uses a focused infrared laser beam to remove dust and material from rock surfaces in a technique called Laser Induced Breakdown Spectroscopy (LIBS). The energy burst from each five-nanosecond pulse creates a flash; its optical spectrum (specific colors) reveals the elemental chemistry of targets up to about 25 feet away.

The first SuperCam LIBS spectra were acquired on a target named Máaz, which means Mars in Navajo. The high-quality LIBS spectra show that the rock has a basaltic composition.

“On Earth, basalts cover the ocean floors and characterize some continental lava flows,” said Wiens. “It’s too early to tell whether the Máaz target is an igneous (volcanic) rock, or is composed of fine-grained igneous sediments that were cemented together in a lake or stream.”

SuperCam’s Raman spectroscopy technique uses a green laser beam to analyze rock mineralogy on Mars, making it possible to precisely characterize the molecular structure of minerals up to about 25 feet from the rover. It can also to detect certain organic molecules.

“Many research groups have spent more than 20 years developing Raman spectroscopy for planetary exploration,” said Sam Clegg, senior scientist at Los Alamos National Laboratory. “For the first time, SuperCam can remotely determine sample mineralogy. Being able to remotely measure both mineralogy and chemistry of the same sample location is very powerful. I am absolutely thrilled to be part of the team to collect the first Raman spectrum from the surface of Mars.”

Visible and near infrared reflectance (VISIR) spectrometry analyzes sunlight that is reflected from the rock targets. This technique, which is already widely used in Mars orbit, makes it possible to describe the mineralogy of Martian rocks, in particular, their alteration in the presence of water to form clay minerals. SuperCam covers the 1.3-2.6 micron range for the first time from Mars’ surface. VISIR spectroscopy will also be used to study the constituents of the atmosphere.

SuperCam is also equipped with a color camera that takes high-resolution images used to understand the geological context of targets and help interpret the chemical and mineral analyses. “The first images show the expected quality and resolution and indicate that the imager is in perfect working order,” said Wiens. This Remote Micro-Imager (RMI) will provide among the highest resolution images from Perseverance.

In addition to the four optical techniques, SuperCam has a scientific microphone that records the zapping sounds generated by the laser impact of LIBS on rocks up to a distance of about 12 feet, which in turn provides information about the rock’s physical properties. This microphone can also record wind noise and sounds produced by the rover itself.

Listen to the zapping sounds

“With the SuperCam microphone, we now have an opportunity to study Martian rocks and atmosphere in an entirely new way,” said Nina Lanza, planetary scientist and team lead for Space and Planetary Exploration at Los Alamos. “The acoustic signal from our rock-vaporizing laser can tell us how hard a rock is or whether it has a coating on it, both of which give us even more information about what Mars rocks are made of and the environmental conditions they have experienced on the Martian surface.”

Listen to the Martian wind

Working with the Jet Propulsion Laboratory and NASA’s Deep Space Network of Interplanetary Communications, SuperCam’s check-out commands are developed and sent from centers in Los Alamos and Toulouse, France. Every few days, American scientists and engineers pass the baton to their French counterparts who, in turn, adjust to Martian time (24 hour, 38 minute day/night cycles) to bring this new technology to life.

“Our team has been working long shifts, often for twelve hours at a time, and largely through the nights since the landing,” said Tony Nelson, SuperCam’s lead electrical engineer at Los Alamos. “Our teams on both sides of the Atlantic have been collaborating superbly to ensure that SuperCam is operated safely to enable excellent science returns for years to come.”

NASA relies on Caltech's Jet Propulsion Laboratory for the development of the Mars 2020 mission. SuperCam was jointly developed by Los Alamos National Laboratory in New Mexico, operated by the Department of Energy, and a consortium of laboratories funded by the French National Centre for Scientific Research (CNRS) and associated with French universities and research establishments. Several Spanish universities led by the University of Valladolid directed development of SuperCam’s calibration targets on the rover. Other contributors included the University of Copenhagen and the University of Winnipeg. Numerous scientists around North America and Europe are contributing to SuperCam’s operations and science.

CNES is the French Space Agency, a governmental organization founded in 1961. As a program-focused agency and center of technical expertise, CNES is responsible for shaping and implementing France’s space policy within the framework of international cooperation, particularly within Europe. CNES is a major source of proposals which aims at maintaining and developing France’s and Europe’s competitiveness and ensuring that they remain key players in the space domain.