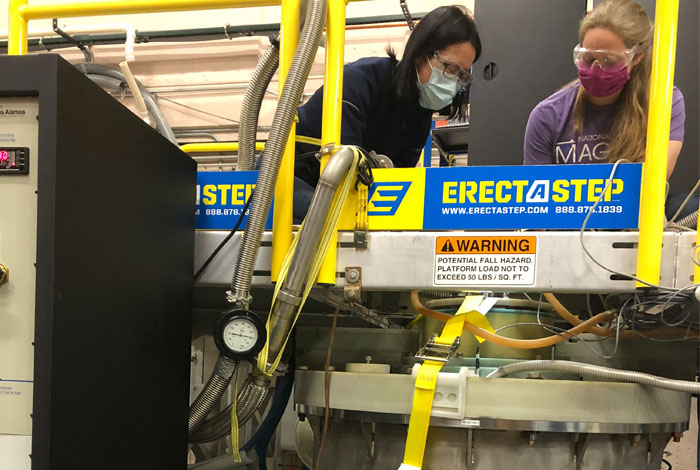 Researchers You Lai (left) and Johanna Palmstrom (right) use the 73T duplex magnet at the MagLab’s Pulsed Field Facility in Los Alamos.

Now, as recently described in Science magazine, a research effort led by Lawrence Berkeley National Laboratory and including scientists from Los Alamos National Laboratory has uncovered the quantum phase transitions that may be behind the behavior of cuprate superconductors. In an experiment representing the first quantitative study of such quantum phase transitions, researchers studied cerium-cobalt-indium 5 (CeCoIn5), a material with similar crystal structure, transport properties and, key to the research, superconducting properties to the cuprates.

“We found a material that behaves the same way and has the same structure as the cuprates, but, using our magnets, we can put it deep in the normal state that occurs before superconductivity,” said research team member John Singleton. “This allows us to study the precursors to superconductivity in materials that mimic the cuprates.”

When subjected to magnetic fields of up to 73 Tesla at the National High Magnetic Field Laboratory’s Pulsed Field Facility at Los Alamos, the quantum phase transition in CeCoIn5 was revealed in a quantity called the Hall resistance. At (and only at) very high magnetic fields, the Hall resistance is determined by the number of mobile electrons, allowing it to be used to detect the change in electron density that occurs at the quantum phase transition.

“The high magnetic fields we’re able to achieve at the Pulsed Field Facility help us to detect the gradual, tiny changes that move the material through the quantum phase transition,” said Singleton. “At such high fields, their signature in the Hall effect becomes completely unambiguous.”

The National High Magnetic Field Laboratory’s Pulsed Field Facility at Los Alamos is the only pulsed field user facility in the United States. The Pulsed Field Facility develops and maintains a set of powerful, nondestructive pulsed magnets providing fields from 60 Tesla to 101 Tesla with different pulse widths that are tailored to support a wide variety of users.

Paper: “Evidence for a delocalization quantum phase transition without symmetry breaking in CeCoIn5,” by N. Maksimovic, et al. in Science.