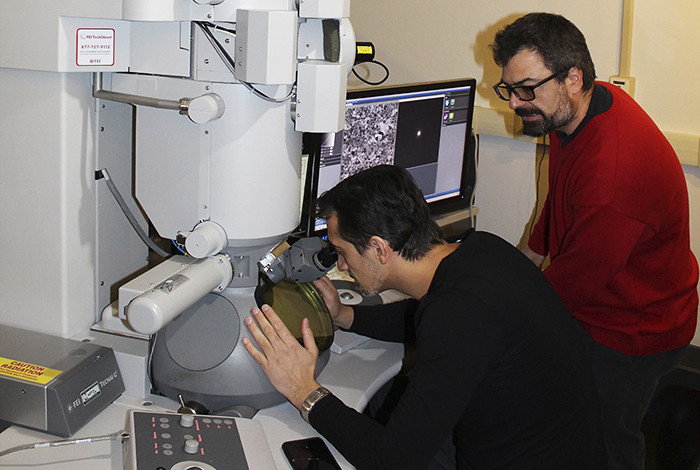 LOS ALAMOS, N.M., March 5, 2019—A new tungsten-based alloy developed at Los Alamos National Laboratory can withstand unprecedented amounts of radiation without damage. Essential for extreme irradiation environments such as the interiors of magnetic fusion reactors, previously explored materials have thus far been hobbled by weakness against fracture, but this new alloy seems to defeat that problem.

“This material showed outstanding radiation resistance when compared to pure nanocrystalline tungsten materials and other conventional alloys,” said Osman El Atwani, the lead author of the paper and the principal investigator of the “Radiation Effects and Plasma Material Interactions in Tungsten Based Materials” project at Los Alamos. “Our investigations of the material mechanical properties under different stress states and response of the material under plasma exposure are ongoing.”

“It seems that we have developed a material with unprecedented radiation resistance,” said principal investigator Enrique Martinez Saez, a coauthor of the paper at Los Alamos. “We have never seen before a material that can withstand the level of radiation damage that we have observed for this high-entropy [four or more principal elements] alloy. It seems to retain outstanding mechanical properties after irradiation, as opposed to traditional counterparts, in which the mechanical properties degrade easily under irradiation.”

Arun Devaraj, a materials scientist and project collaborator at Pacific Northwest National Laboratory, noted, “Atom probe tomography revealed an interesting atomic level layering of different elements in these alloys, which then changed to nanoclusters when subjected to radiation, helping us to better understand why this unique alloy is highly radiation tolerant.”

The material, created as a thin film, is a quaternary nanocrystalline tungsten-tantalum-vanadium-chromium alloy that has been characterized under extreme thermal conditions and after irradiation.

“We haven’t yet tested it in high-corrosion environments,” Martinez Saez said, “but I anticipate it should perform well there also. And if it is ductile, as expected, it could also be used as turbine material since it is a refractory, high-melting-point material.”

Funding: Research from Los Alamos was supported by the Laboratory Directed Research and Development program of Los Alamos National Laboratory and the G. T. Seaborg Institute as well as the U.S. Department of Energy, Office of Science.