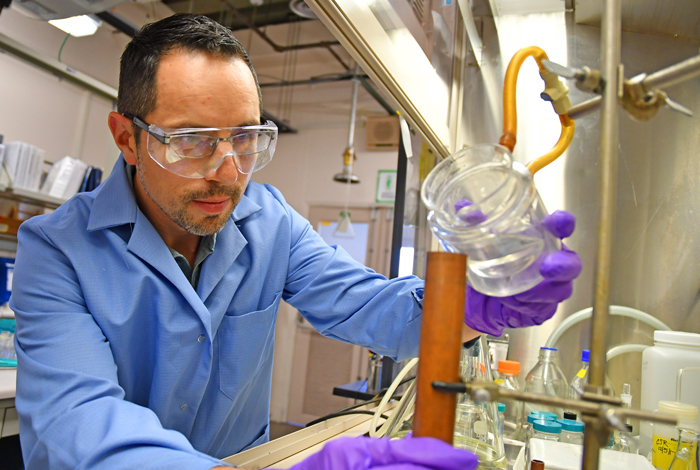 Chavez in his lab working on a possible TNT replacement, bis-oxadiazole.

David Chavez, deputy group leader of High Explosives Science and Technology group at Los Alamos National Laboratory, has been added to a newly formed Editorial Advisory Board for the prestigious Journal of the American Chemical Society (JACS) by the new Editor-in-Chief of the Journal, Erick Carreira.

The new Editorial Advisory Board "has been crafted to be inclusive. Joining the typical group of established researchers heralding from academic institutions, the new Board welcomes ambitious faculty early on in their career path. This diversity of insight, opinions, experiences, and perspectives is sure to enrich discussions on the future of and vision for JACS," wrote Carreira, in an editorial this past January.

Chavez is a highly-respected scientist known for his many innovations in the area of energetic materials, particularly in developing novel low-smoke high-nitrogen pyrotechnics and synthesis of a potential replacement for TNT, another nitrogen-containing compound called bis-oxadiazole. Chavez is also an often-quoted scientific expert on explosives in general.

"This is a huge honor for me as JACS is one of the premier chemistry journals in the world and now I have a hand in help shaping its future," said Chavez. "The intent is to broaden the diversity of the Associate Editors and the Editorial Advisory Board in terms of gender, ethnicity, age and subject matter expertise. I was selected to partly due to my ethnicity and age, technical accomplishments, and to serve as a voice for national laboratories and other government research labs."

The Editorial Advisory Board is called upon for advice and counsel, particularly at times when there may be a need to resolve a dispute -- typically between an author and an associate editor if the subject matter is outside the Editor-in-Chief's field of expertise. The board is also relied upon to provide broader input on processes, marketing, what JACS could do better, and more big picture type issues, according to Chavez.

Chavez has published 82 papers in the areas of organic chemistry and energetic materials synthesis (4750 citations) and holds 12 patents in energetic materials and pyrotechnics. He also served on the Taos Municipal School Board and on the advisory board for University of New Mexico-Taos campus, both in his home town of Taos, New Mexico for nine years.

He joined the Laboratory in 2003 as a postdoc and Frederick Reines Distinguished Fellow, becoming a full Staff Member in 2006. He holds a Bachelor's degree in Chemistry from the California Institute of Technology (Caltech) and a Ph.D in Organic Chemistry from Harvard University.

Chavez is an invited Professor at the Ecole Normale Superieure, in Cachan, France as well as an adjunct professor at University of New Mexico, Taos Branch, where he teaches chemistry. HIs many honors, appointments and awards include the Department of Energy's E. O. Lawrence Award, Fellow of the American Association for the Advancement of Science (AAAS) and member of the Board of Trustees for Caltech, where he serves on NASA’s Jet Propulsion Laboratory Student Experience Committee and the Technology Transfer Committee.