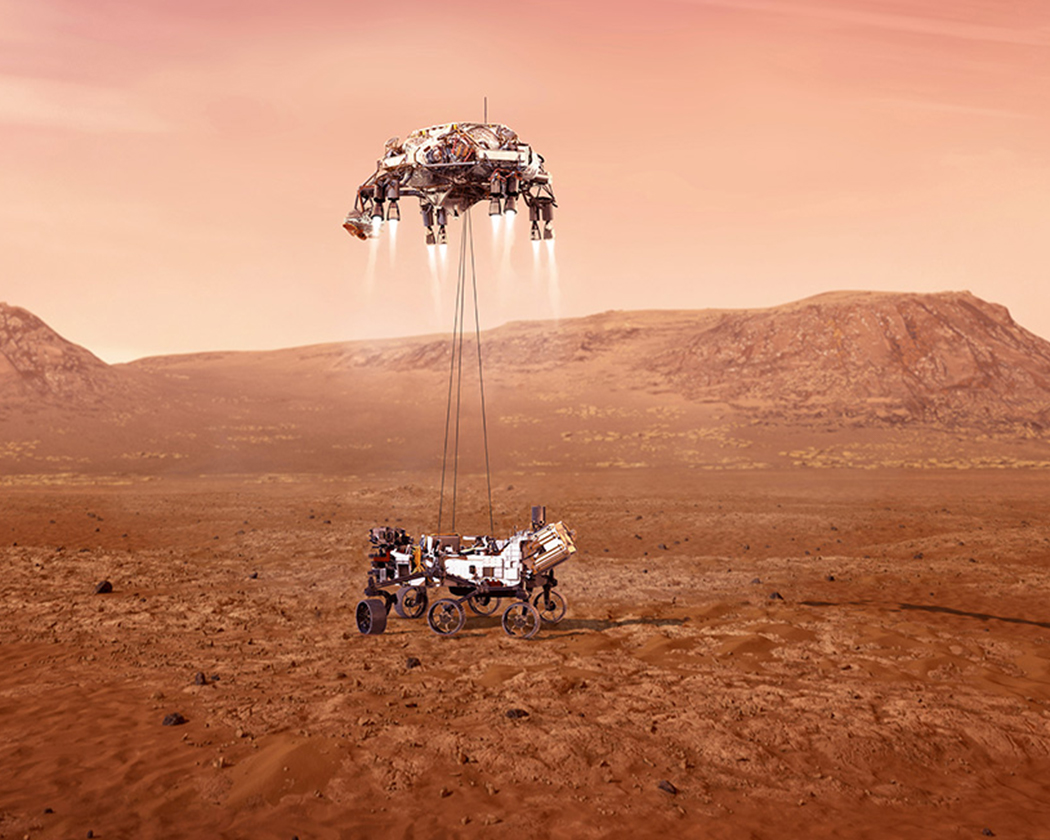 LOS ALAMOS, N.M., Feb. 16, 2021—When NASA’s Mars Perseverance rover touches down on the surface of Mars on Feb. 18, a bit of New Mexico will land along with it, thanks to work done at Los Alamos National Laboratory.

“Scientific discovery is the hallmark of Los Alamos, and we’re excited to apply our scientific, technical, and engineering innovations and expertise to the discovery of new sights and sounds on Mars,” said John Sarrao, deputy laboratory director for science, technology, and engineering. “We look forward to Perseverance touching down on a new era of discovery on the Red Planet.”

The Perseverance rover is equipped with seven scientific instruments, two of which were developed in part at Los Alamos National Laboratory.

The first is SuperCam, which was invented at Los Alamos in collaboration with the French space agency and other academic partners in France, Spain, Denmark, and Canada. It sits on the rover’s mast and is equipped with a laser that can zap rocks up to 25 feet away, allowing Perseverance to study rock samples that cannot be reached with its robotic arm.

“The laser’s dot is smaller than a pencil point and examines rock textures, minerals, and chemicals to find those that formed or changed in water on Mars long ago, which can tell us about past habitability of the planet. It also looks for rocks and soils that could preserve signs of past microbial life, if any existed,” said Roger Wiens, the lead scientist on SuperCam.

Furthermore, SuperCam will help identify elements in the Martian dust that might be harmful to humans, which is critical information for future human exploration of the planet.

SuperCam will also feature the first scientific microphone to ever operate on Mars. It will listen to the snap of the laser impacts and give insight into the physical properties of the rocks. This will provide another important piece of information for geologists to understand what the rocks are telling researchers about Mars’ past. In addition, the microphone can be used to determine the wind speed and direction, and can measure the speed of sound for the first time on another planet. Along with another microphone on the rover that will listen to the landing, SuperCam’s microphone will provide some of the first-ever recordings from the Martian surface.

The second instrument from Los Alamos is SHERLOC, which sits on the arm of the rover and will use UV laser-induced fluorescence to search for organic molecules that might be signs of life. SHERLOC’s detector and electronics were built in Los Alamos.

“We’ve learned an immense amount about Mars over the last decade while the Curiosity rover has trekked across the planet’s surface,” said Wiens. “We now know that lakes, rivers, streams, and likely oceans were part of the geologic history of Mars—which begs the question: if water once existed on Mars, did life also exist there? The Perseverance mission hopes to answer that question.”

Los Alamos also played a key role in developing the rover’s power source. To have dependable power to explore the frigid surface of Mars, the Perseverance rover is equipped with a type of power system called a multi-mission radioisotope thermoelectric generator (MMRTG).

“An RTG is essentially a nuclear battery that uses heat from the natural radioactive decay of plutonium-238 to generate electricity,” said Jackie Lopez-Barlow, the radioisotope power systems program manager at Los Alamos National Laboratory. “You can’t always rely on solar power, particularly when you’re far from the Sun or when dust storms might be a problem. RTGs provide long-lasting power that works no matter how far out in space you are.”

Los Alamos National Laboratory will host a virtual landing celebration at 6 p.m. MST on Thursday, Feb. 18. The event is free and open to the public, but registration is required.