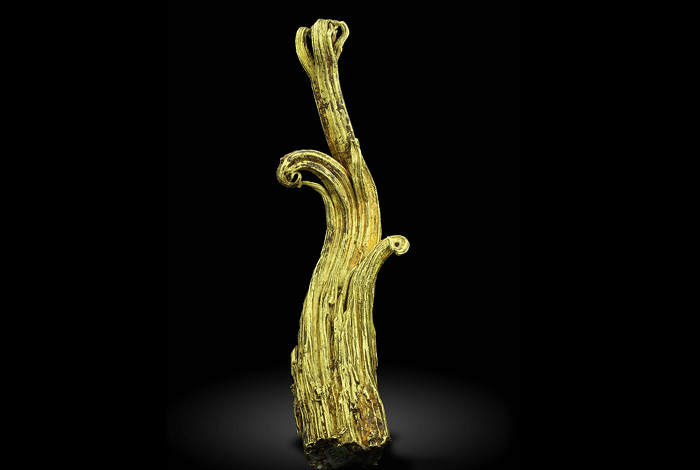 Los Alamos, New Mexico, Feb 13, 2019—Using neutron characterization techniques a team of scientists have peered inside one of the most unique examples of wire gold, understanding for the first time the specimen's structure and possible formation process. The 263 gram, 12 centimeter tall specimen, known as the Ram's Horn, belongs to the collection of the Mineralogical and Geological Museum Harvard University (MGMH).

"Almost nothing other than the existence of the specimen is known about wire gold," said Sven Vogel, a physicist at Los Alamos National Laboratory's neutron science center, LANSCE, a half-mile-long particle accelerator that provides high- and low-energy protons and neutrons for a wide variety of scientific research.

Found in 1887 at the Ground Hog Mine in Red Cliff, Colorado, mysteriously shaped like a twisted bunch of wires instead of the more recognizable golden nugget, the Ram's Horn has baffled mineralogists since its discovery. The unknown: what is its fundamental structure and how did it form?

"Some native metals, a metal or metal alloy found in nature can occur in what is called wire morphology," said John Rakovan, Professor of Mineralogy at Miami University in Ohio. "Much more common in silver, the wire morphology is rarely seen in gold samples and this specimen is without question the finest known example."

Because of its rarity and associated monetary value it is not possible to cut into or break open the specimen, and because of its density low-energy X-rays and other diagnostics can only interrogate exterior surfaces, so no scientific studies have ever been published on the internal nature of this specimen, until now.

The research results suggest the wire gold is very different from wire silver. "Wire silver is a mosaic-like polycrystalline aggregate with many hundreds to thousands of crystals in a single wire," said Rakovan. "The gold appears to be composed of only a few single crystals. Furthermore, we discovered that these samples are not pure gold, but rather gold-silver alloys with as much as 30 percent silver substituting for gold in the atomic structure."

"We knew that on the surface this gold sample was about 70 percent gold but nobody knew if that was only the case on the surface," said Vogel. "Using our neutron source, that we normally use to study materials like uranium alloys or nuclear fuels, we could verify that this sample is homogeneous, meaning the whole sample is this 70-30 mix of gold to silver."

In a separate study, Rakovan and colleagues recently discovered that the growth of wire silver leads to an unexpected isotope enrichment. The Los Alamos team is using the neutron spectroscopy data to evaluate if isotope enrichment also occurs in these gold-silver alloys. Another surprise was the uniformity of the gold/silver mixture. "Because the alloy is highly homogeneous, it would appear that the silver is bonding to the gold in the crystalline structure at the atomistic level," said Rakovan.

The results of this study will have implications for geoscientists who are trying to understand the geochemical processes that are at play in the formation of gold deposits, and for materials scientists and engineers who may use the unique properties of these materials in technological applications.

The unique capabilities of the LANSCE facility can be used to study the interiors of valuable specimens like this gold wire without having to open them up for analysis. Using neutron techniques at LANSCE scientists can “look” inside these large gold specimens, nondestructively, and learn about their texture, atomic structure, and element and isotope chemistry.

The sample will be the centerpiece of a new exhibit at the Harvard Museum of Natural History in the spring of 2020. “The Rare and Beautiful," highlighting the aspects that make an object valuable, and how humankind’s appreciation for beauty, rarity, uniqueness and culture have shaped those values. The gold wire is not just the world’s finest gold specimen, but it also represents unique circumstances of formation that reveal its forming process and ultimately the history of Earth. The exhibit is a rare opportunity for the public to see this gold specimen, normally kept in a bank vault out of sight.

"The Mineralogical and Geological Museum at Harvard is one of the oldest and continuously operating mineral museums in the United States," said Raquel Alonso-Perez, curator at MGMH. "Because of Harvard’s strong Chemistry Department, the University began collecting minerals starting in the 1850s to better understand their crystalline structure from a chemical point of view." The gold wire specimen was bequeathed to Harvard in 1947 as part of the A. C. Burrage Collection.

"These academic collaborations really push the envelope for us," said Vogel. "We usually use the LANSCE accelerator to characterize materials that are relevant to the Los Alamos mission but we sometimes get to apply it to geological samples like this very famous gold specimen. It's a win-win for the Laboratory and the universities."