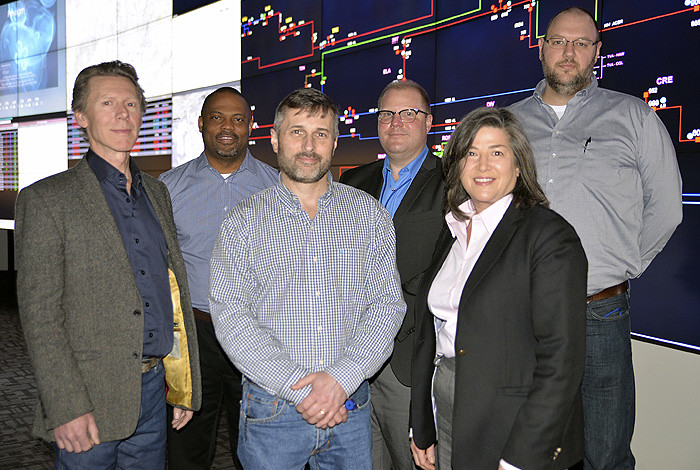 LOS ALAMOS, N.M., Feb. 12, 2019—A team of researchers from the Department of Energy’s Los Alamos and Oak Ridge national laboratories has partnered with EPB, a Chattanooga utility and telecommunications company, to demonstrate the effectiveness of metro-scale quantum key distribution (QKD) as a means of secure communication for the nation’s electricity suppliers. This initial milestone is part of the team’s three-year project focused on next-generation grid security.

“Recent demonstrations at Los Alamos have shown that QKD systems can operate on existing electric infrastructure in real-world settings, including during a historic snowfall,” said Ray Newell, Los Alamos research scientist and leader of the Lab’s quantum communications team. “Our partnership with Oak Ridge and EPB shows that utilities can realize the benefits of quantum security using a mix of distinct but interoperable communication systems.”

QKD harnesses the inherent randomness of quantum mechanics to authenticate and encrypt data. The technology allows two parties to share a secret “key” and alerts both parties to any third-party intrusion, a critical security capability as more of the nation’s grid is modernized and data are moved online.

The goal of this initial demonstration, conducted by ORNL’s Nick Peters and Phil Evans, Los Alamos’s Ray Newell and Glen Peterson, and EPB’s Tyler Morgan, Ken Jones, and Steve Morrison, was to prove the interoperability of disparate QKD systems. ORNL senior scientist Peters said that because utilities are largely regional, providers use a mix of components and have fluctuating upgrade schedules. Ensuring that different utility providers can operate in sync across the nation’s electric grid is critical to realizing the potential of QKD on a national scale.

To prepare for the demonstration, the ORNL researchers modified a commercial QKD system while Los Alamos developed its own custom system in-house; both systems generated separate keys that, when interfaced at a “trusted node,” or secure information exchange, generated a third key, which was then distributed between the Los Alamos and ORNL systems.

“This demonstration accomplished two things: it showed that different systems can operate together and it established the functionality needed to relay keys over larger distances often encountered on the electric grid,” said Peters, leader of ORNL’s quantum communications team.

Both ORNL and Los Alamos have dedicated many years to developing quantum communications systems, and several technologies developed by the laboratories are currently licensed to industry.

The demonstration took place at EPB, which, according to ORNL’s Evans, is an ideal partner because the utility has deployed a fiber optic network in concert with its electrical distribution infrastructure. Besides that, ““they are engaged with us on multiple projects for facilitating next-generation technologies to secure our nation’s infrastructure,” he added.

“EPB is excited about the results of our continuing research partnership with ORNL and Los Alamos, and the opportunities that we share to maintain the security and reliability of Chattanooga’s smart grid for our customers, as well as customers who are served by other utilities,” said EPB Director of Information Security Steve Morrison. “Our mutual goals align with EPB’s mission to improve quality of life and support the growth of the local economy.”

Despite the demo’s success, however, there is still work to do. Next, the researchers will work toward overcoming QKD’s notorious distance limitations.

Much like electrical resistance reduces the amount of electricity being transmitted as distance increases across traditional power lines, increasing the distance of fiber optic transmissions reduces the throughput of quantum communications. For the nation’s electric grid, increasing the distances over which these QKD systems can effectively be used is critical, and for that the researchers will once again rely on trusted nodes, in this case EPB’s electrical substations.

The eventual goal is to implement QKD systems in numerous substations, which are placed at intervals and are capable of relaying the quantum keys. ORNL’s Evans compared it to a relay race, in which one runner passes the baton to another, with each runner carrying the baton for a certain interval. By passing the baton at each substation before the signal is lost, the signal is refreshed for the next journey and so on, potentially expanding the range of QKD technology significantly.

This research was supported by the Department of Energy’s Office of Cybersecurity, Energy Security and Emergency Response.