10 leaders who thrived in wartime Los Alamos despite discrimination elsewhere 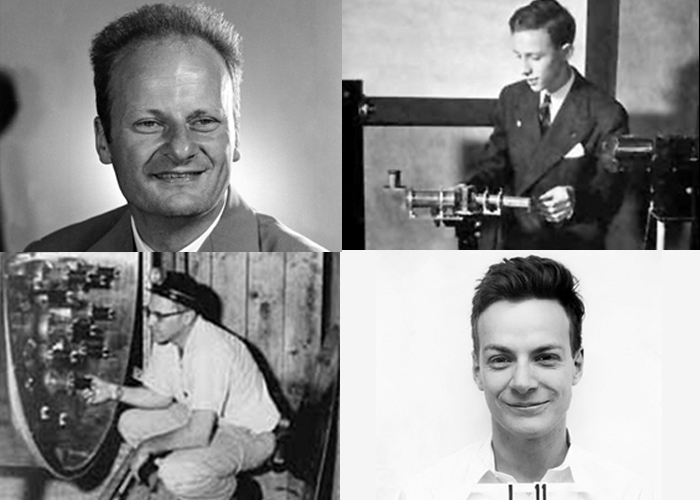 According to a May 1945 roster, Jews made up about two-thirds of the leadership in the Manhattan Project’s Theoretical Division (T-Division) — the group tasked with calculating critical mass and modeling implosions — which is still operating today as the only division with an uninterrupted history since Project Y.

Below are 10 of those historic leaders. Most experienced discrimination elsewhere in the scientific community during World War II, but persevered to make significant contributions to science at a pivotal moment in history.

Many of T-Division’s Jewish scientists identified culturally with their heritage, but didn’t observe religious or ritual traditions, leading some to remark that these theoretical physicists were Jews in “theory,” with a double meaning. Their theoretical work had concrete results, leading to one of the most significant scientific advancements in human history: the creation of the world’s first atomic bomb, which helped end the horrors of World War II.

At least half of Project Y’s Jewish physicists came to America due to religious oppression in their home countries. After arriving, some experienced further discrimination in the U.S. at universities and commercial institutions — turned away by organizations citing limits on how many Jews they could accept at one time.

Recruiters at Los Alamos looked for the best scientists, regardless of background. The top secret mission’s inclusive approach to recruiting top talent regardless of religion (and other factors) proved a major boon to its success.

J. Robert Oppenheimer, the Lab’s first director who created T-Division and assembled many of its members, was Jewish (although not religiously observant). His family name comes from the German city Oppenheim, as a result of the 1808 Napoleonic decree that required Jews to adopt “conventional” names. Antisemitism was rampant in Oppenheimer’s circles at Harvard, at Berkeley and in Germany. He largely ignored it, which had complicated results. For example, Oppenheimer’s friend, Isidor I. Rabi, claims Oppenheimer’s denial of his Jewishness led to self-doubt and perpetually feeling like an outsider.

Hans Bethe (T-Division leader) didn’t consider himself Jewish, but the Nazis did; whether or not he was practicing did not affect the discrimination he experienced. He was dismissed from the University of Tübingen in Germany and served on the Manhattan Project. In 1967, he was awarded the Nobel Prize for his work on the theory of stellar nucleosynthesis.

Victor “Viki” Weisskopf (T-Division deputy division leader) was born in Vienna, Austria, and found university jobs scarce for Jews once the Nazis came to power. As the Holocaust loomed, Weisskopf learned English and published scientific papers in America, ultimately giving him a way to escape. Recruited to the Manhattan Project, Weisskopf led the calculations of the effects of the first atomic bomb, predicting the emission of light and the probability of fallout. In 1945, Weisskopf co-founded the Federation of Atomic Sciences, formed to promote the peaceful use of atomic energy.

John von Neumann (T-Division consultant) was a child prodigy born in Budapest, Hungary. He immigrated to the U.S. in 1929 to work at Princeton University, thus avoiding the atrocities in Europe following the Nazi rise in 1933.

Although he was not practicing, von Neumann's family identified as Jewish. He spoke several languages and enjoyed Yiddish humor. He was generally regarded as the foremost mathematician of his time, and the leading authority of the mathematics of shaped charges. Von Neumann played a pivotal role in numerous aspects of the Manhattan Project, overseeing calculations and helping to provide the concept and design of the explosive lenses needed to compress the plutonium core of Fat Man.

After WWII, von Neumann made significant contributions to science, received numerous awards and honors, and died too early (at age 53) of cancer. Von Neumann was so brilliant, Bethe said of him: “I have sometimes wondered whether a brain like von Neumann’s does not indicate a species superior to that of man.”

Sir Rudolph Peierls (T-Division group leader) was a member of the British Mission, a scientific delegation during the war. With his Viennese-born friend Otto Frisch, he co-wrote the Frisch-Peierls memorandum, which ignited the British, then American, authorities’ interest in atomic weapons. It led scientists to think about how to create a bomb, rather than whether or not one was possible. In 1943, Peierls was turned away from a Cape Cod hotel that advertised that it catered to a “restricted clientele,” which, upon arrival, Peierls found to exclude Jews. Peierls had a very different experience in Los Alamos. After his work on the Manhattan Project, he returned to the United Kingdom.

Robert Serber (T-Division group leader) was denied a position at the University of California, Berkeley, where Oppenheimer worked. At the time, the physics department chair claimed that “one Jew on the faculty is enough.” In the Manhattan Project, Serber developed a crash course in new weapons technology for all incoming scientists.

Richard Feynman (T-Division group leader) was rejected by Columbia University and Bell Labs, both of which cited quotas for the number of Jews admitted. Feynman, nevertheless, finished his Ph.D. During the Manhattan Project, he and Bethe developed the Bethe-Feynman formula for calculating the yield of a fission bomb, building on the previous work of Serber. Feynman was instrumental in developing safety procedures for material storage at the Manhattan Project’s uranium enrichment facilities in Oak Ridge, Tenn. Feynman won the 1965 Nobel Prize for his work on quantum electrodynamics.

Joseph Hirschfelder (T-Division group leader) was the great-grandson of German immigrants. After the Manhattan Project, he was elected to the National Academy of Sciences, was chosen to be a fellow of the American Academy of Arts and Sciences and received the National Medal of Science from President Gerald Ford for his "fundamental contributions to atomic and molecular quantum mechanics, the theory of the rates of chemical reactions, and the structure and properties of gases and liquids.”

George Placzek (T-Division group leader) was born in Brno, Moravia (now the Czech Republic), and many of his family members were killed during the Holocaust. Placzek’s doctoral dissertation was largely experimental, and he later joked: “I started as an experimental physicist, but later I stopped working and thus some people think that I am a theoretician.” Before the Manhattan Project, Placzek worked at Hebrew University and had a profound influence in establishing physics as a legitimate discipline in Israel. He witnessed the brutality of Joseph Stalin’s regime firsthand in Kharkiv, Ukraine, in 1937, and because he related those experiences, Placzek was instrumental in steering Oppenheimer and others away from communism.

Fred Reines (T-4) was the son of Russian Jewish immigrants. One might assume his parents immigrated to the U.S. in search of greater opportunities. Recruited by Feynman, Reines worked at Los Alamos for 15 years. He received the Nobel Prize in Physics in 1995 for the successful detection of the neutrino (the experiments having been performed between 1953 and 1956). He is the only Lab Nobel laureate whose cited work was conducted while an active Los Alamos employee.

Roy Glauber (T-2) was born in New York City and perhaps escaped many forms of discrimination in part due to being discovered at such an early age and on American soil. One of the youngest members of the Manhattan Project, Glauber was recruited after his sophomore year at Harvard. At only 18 years old, he led a team at the Lab. When he later returned to Harvard to finish his undergraduate degree, he found it difficult and taxing to do his own computations without a team of assistants to do calculations for him, as he had during the war effort. Glauber won the Nobel Prize in 2005 for his contribution to the quantum theory of optical coherence.

In Jewish tradition, the Kaddish prayer, written largely in Aramaic, is often associated with memorializing those who have died. It requires a minyan, a quorum of 10 Jewish adults required to recite specific passages in public prayer. Most likely, the Jews who served in T-Division during the Manhattan Project could not have recited the Kaddish prayer fluently. But today, as a Lab, we acknowledge these scientists’ enormous contributions to Los Alamos and the Manhattan Project, asking that their memory and immense legacy serve as a blessing to all of us.

The author returns to Los Alamos

This month, Shlachter returned to Los Alamos as a guest scientist. Shlachter also serves as a rabbi at HaMakom synagogue in Santa Fe and is Rabbi Emeritus at the Jewish Center in Los Alamos.

Work by Shlachter served as the basis for this article. Information was taken primarily from “Jews in Theory: Jewish Scientists in Theoretical Division at Los Alamos During the Manhattan Project,” published in (U) "Weapons Review Letters, Issue 80, Trinity 75th Anniversary," May 2021, LA-CP-21-00196, and from a Dec. 9, 2021, talk at the Bradbury Science Museum, “Jews in Theory: Jews at Los Alamos, NM, during the Manhattan Project.”