How to see in the dark—and why we need to 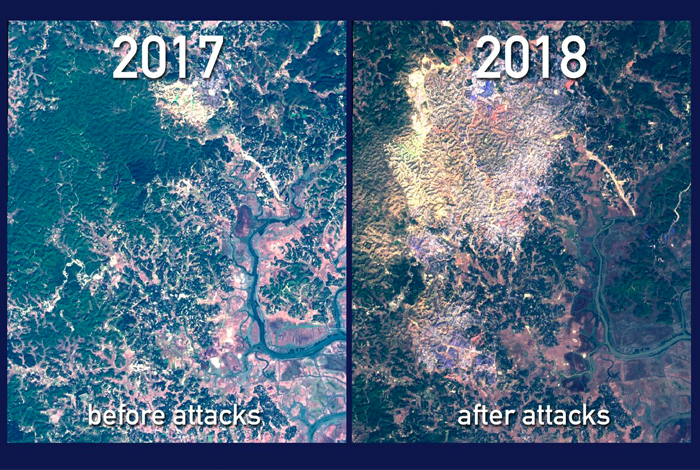 An optical satellite image from the Sentinel-2 satellite of the Rakhine state of Myanmar before and after the government attacks in August 2017. European Space Agency

In August 2017, ongoing violence in the Rakhine state of Myanmar came to a boiling point after a coordinated attack by insurgents on several police posts and an army base. Government forces responded with “a brutal attack against hundreds of thousands of unarmed men, women, and children in a grossly disproportionate response” against the minority Rohingya people that resulted in more than 740,000 fleeing the country to neighboring Bangladesh.

Traditional optical satellite imagery showed evidence of the devastation, which was widely condemned by the international community. This type of imagery can be a powerful tool for the U.S. military in identifying everything from ground disturbances related to underground nuclear testing to human migration in times of crisis, but optical satellite imagery has its limits. It can’t see through clouds or thick smoke, and has limited utility at night. So how do you see through visual impediments to understand what’s happening on the ground?

Synthetic aperture radar (SAR) data is one answer. While SAR has been regularly used by scientists who study environmental and other physical changes, it has not been widely employed as a tool for human rights monitoring—but it should be, because it can make it harder for bad actors to hide their campaigns of destruction.

SAR can capture images of the Earth’s surface regardless of cloud cover, darkness or smoke. It does this by emitting electromagnetic waves and measuring the reflected signal, called backscatter. These waves have two properties: amplitude, or the strength of the signal, and phase, or the number of oscillation cycles in the signal. Comparing the phase across pairs of SAR images can reveal small, subtle changes in elevation or surface deformations.

At Los Alamos National Laboratory, we analyzed public SAR data from the European Space Agency’s Sentinel-1 satellite acquired during 2017 and 2018 in north Rakhine to detect the government’s demolition of Rohingya villages conducted in the wake of the August 2017 attacks. Since typical Rohingya villages consist of thatched-roof houses surrounded by palm trees, we used a simple change-detection algorithm to detect deforestation at the locations of villages. That allowed us to identify land being cleared at the locations of destroyed villages, which supported reports of government forces’ methods to erase any trace of the villages.

Read the rest of the story as it appeared in C4ISRNET.