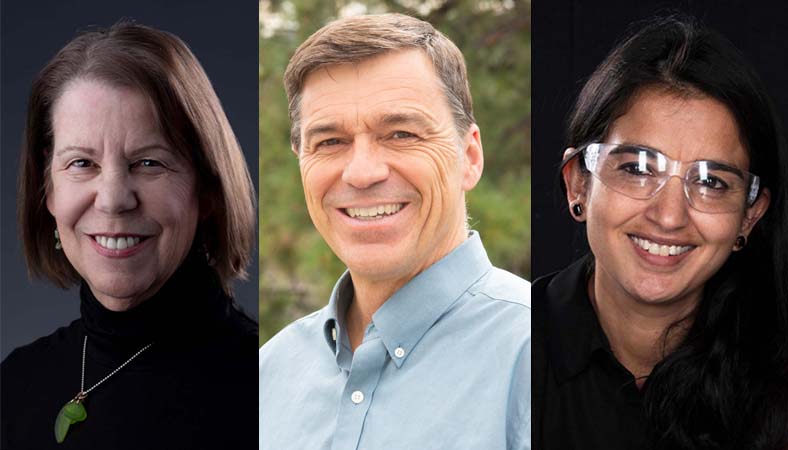 Babetta Marrone, Thomas Mark McCleskey and Harshini Mukundan have been named fellows of the American Association for the Advancement of Science (AAAS).

Three Los Alamos scientists have been named fellows of the American Association for the Advancement of Science (AAAS). Election to AAAS fellowship is an honor bestowed upon AAAS members by their peers for their scientifically or socially distinguished efforts to advance science or its applications.

“This is a well-deserved honor for three exceptional Los Alamos scientists who have made influential advances in their scientific fields,” said Deputy Director for Science, Technology & Engineering John Sarrao. “The Laboratory’s national security mission benefits from their dedication, leadership, and cutting-edge scientific research.”

The new Fellows and the AAAS divisions honoring them are as follows:

Thomas Mark McCleskey: Chemistry
For the development of polymer assisted deposition of thin film coatings, for the elucidation of a new paradigm in beryllium binding, and for enlightened chemistry leadership at a national laboratory.

Harshini Mukundan: Chemistry
For pioneering the understanding of the biochemistry of interactions between pathogen amphiphiles and host lipoproteins, and development of novel spectroscopic assay modalities for their detection.

Marrone is a senior scientist in Los Alamos’s Bioscience Division, Bioenergy and Biome Sciences Group. She has been at Los Alamos in Bioscience Division since 1985. Her current science and technology focus is the sustainable manufacturing of biofuels, biomaterials and bioproducts. She holds a bachelor’s degree in natural and social sciences from Hampshire College, and a doctorate in neurosciences from Rutgers University with a fellowship from the National Science Foundation. Her postdoctoral work was at the University of Wisconsin, Madison in physiological chemistry, with a fellowship from the National Institutes of Health.

McCleskey is the division leader for Chemistry Division at Los Alamos. He received a bachelor’s degree in chemistry from Harvey Mudd College and a doctorate from Caltech in inorganic chemistry. He joined Los Alamos National Laboratory in 1994 as a director’s-funded postdoctoral fellow. His research has involved a wide range of inorganic chemistry and spectroscopy spanning from beryllium to plutonium. His work with beryllium led to a new paradigm for understanding beryllium binding and resulted in a rapid beryllium test that was further developed and sold commercially. His efforts in polymer assisted deposition of thin films yielded high-quality single crystal films of a wide range of materials including plutonium oxide.

Mukundan joined Los Alamos National Laboratory as a National institutes of Health postdoctoral fellow, and she was retained as a staff scientist in 2009. Since then, her research has been focused on the development of both targeted and agnostic diagnostic and detection systems, primarily for infectious diseases. This multidisciplinary portfolio involves the integration of microbiology, immunology, host pathogen biology, biochemistry, spectroscopy, engineering, bioinformatics, theoretical modeling and microfluidics in order to develop applied solutions for complex diagnostic challenges. She is the group leader for Physical Chemistry and Applied Spectroscopy at Los Alamos, and she is an adjunct professor at the University of New Mexico and affiliate scientist at the New Mexico Consortium. She graduated with a master’s degree in microbiology from Barkatullah University, India, and a doctorate in biomedical sciences from the University of New Mexico.

The world's largest multidisciplinary scientific society and a leading publisher of cutting-edge research through its Science family of journals, AAAS has individual members in more than 91 countries around the globe. The tradition of electing AAAS Fellows began in 1874. Since then, the recognition has gone to thousands of distinguished scientists, such as inventor Thomas Edison, elected in 1878, sociologist W. E. B. Du Bois (1905), anthropologist Margaret Mead (1934), computer scientist Grace Hopper (1963), physicist Steven Chu (2000) and astronaut Ellen Ochoa (2012).