Getting to the bottom of a crater on asteroid 16 Psyche

Simulating a massive impact on a distant asteroid helps planetary scientists understand its composition, the early solar system, and how to deflect a rogue interplanetary object 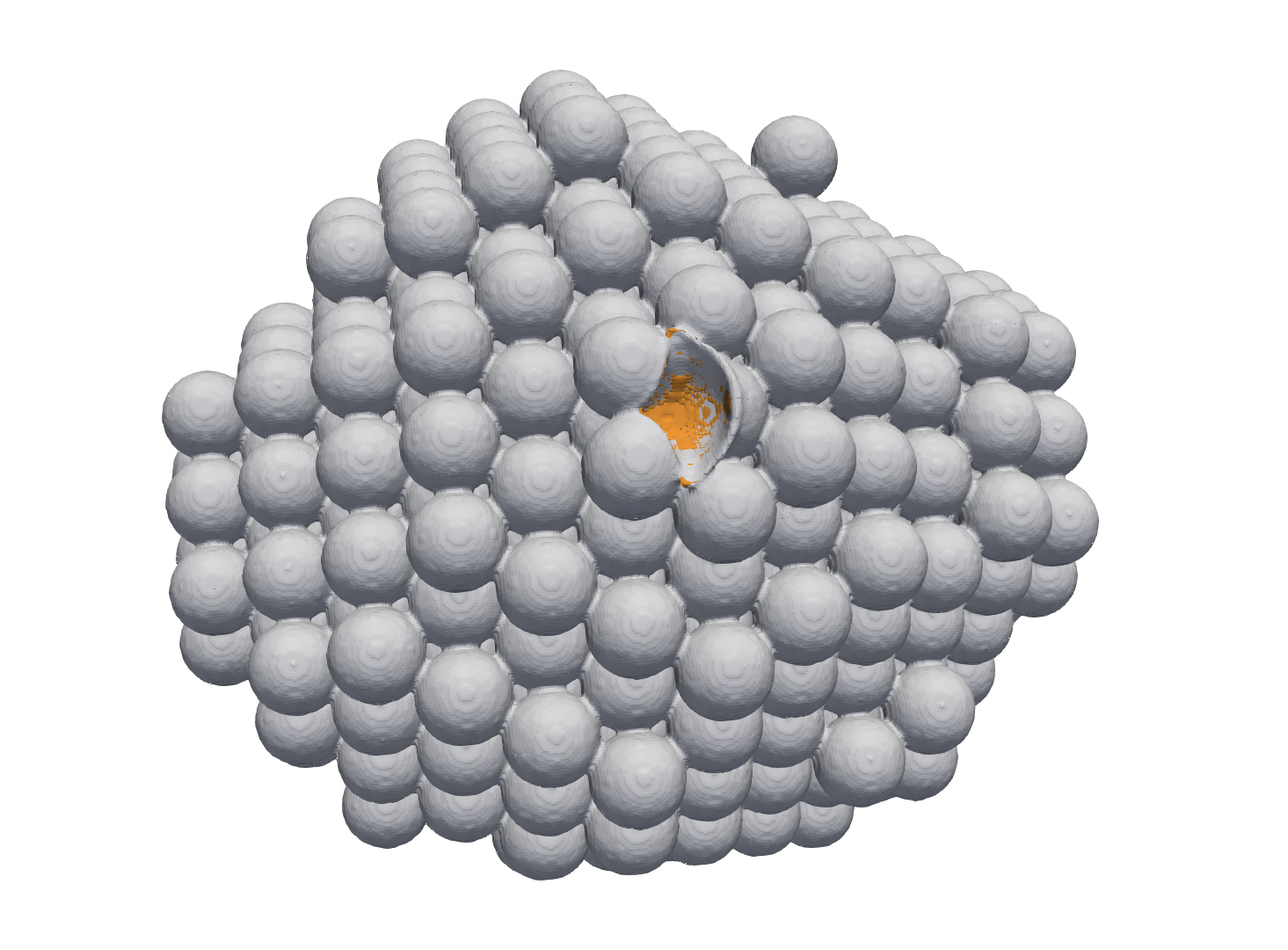 Supercomputer simulations by Los Alamos National Laboratory aid in predicting the composition of asteroid P16 Psyche based on the shape of a large impact crater observed by radar. An image from a simulation (top) shows an impactor striking Psyche modeled as a hexagonally packed rubble pile.

A few billion years ago, in the icy quiet of space, a rogue object slammed into the asteroid called 16 Psyche, gouging out a crater roughly four miles deep and 33 miles wide. A new visualization brings the impact to life, helping planetary scientists study the asteroid’s composition, learn more about how the planets were formed, and refine methods for knocking an asteroid off-course if it were headed toward Earth.

The material of an asteroid can be put together in different configurations, represented in the simulations as hexagonal packing, like a honeycomb, and square packing, like stacked boxes. Porosity refers to how tightly packed a material is and how much empty space it contains.

For impacts at 90 degrees to the target surface, Caldwell explained, the radius and depth are about equal for a solid target, but this trend does not necessarily hold for a rubble-pile asteroid.

“In our simulations, hexagonal packing in a rubble pile gave almost perfect matches to the ratio of the depth to the diameter on Psyche,” Caldwell said. “That result was really exciting, because it’s shape, not just size, that you have to understand to determine the feasibility of potential compositions.”

Psyche is not expected to be made of uniform spheres in hexagonal packing, but the rubble would be of varying sizes and shapes, with gravity and seismicity affecting the packing. The simulations show that crater formation is sensitive to packing geometry and possibly contact surface area, and the Los Alamos team is still working out why that is. The regularly packed configurations are good starting points because they explore notably different geometries, Caldwell said.

“The level of porosity in Psyche, along with how much of the asteroid is composed of non-metallic materials, are central questions to understanding Psyche’s material composition,” Caldwell said. Radar observations indicate the asteroid is metallic, but density measurements indicate it is porous. Simulating the impact that formed the crater is one way to probe these unresolved questions.

The Psyche series of simulations, which ran for a few days on about 1,000 to 3,000 cores of a Los Alamos supercomputer, cover roughly 400 seconds of an object’s impact and the aftermath. Caldwell and her colleagues modeled uniformly microporous structures, rubble-pile configurations, and a layered structure with a denser core and a more porous mantle over the core.

The simulations modeling Psyche as a solid asteroid, as an asteroid consisting only of microporosity, and as a rubble pile with regular square packing failed to match the real crater’s actual depth-to-diameter ratio, Caldwell said.

The current Los Alamos simulation provides a baseline that will be updated in 2026 when NASA’s planned Psyche research mission arrives at the asteroid and begins gathering data on its material composition.

As NASA’s first visit to a metallic asteroid, as opposed to a rocky or icy one, “the Psyche mission will help us understand more about the early days of the solar system and how the planets formed,” Caldwell said. “This mission and others in the future can benefit from our modeling results by focusing on gathering data not only on bulk densities but also to address unanswered questions about microporosity, macroporosity, and near-surface porosity.”

Data from the NASA mission will also help the Los Alamos team refine the hydrocodes, along with the equations of state used by the codes to model the behavior of a given material, such as Monel, a nickel-iron alloy. The Laboratory uses hydrocodes on its supercomputers to study a wide range of physical phenomenon, from wildfires to detonations, not just asteroids.

In anticipation of the NASA mission to Psyche, which launches in August 2022, the Los Alamos team developed the simulation to test hypotheses about the asteroid’s geology, using the known dimensions of the deepest crater as a set of constraints for sussing out the asteroid’s materials and their arrangement.

At about 140 miles in diameter, the potato-shaped Psyche is the largest metallic asteroid in the solar system and might be the exposed remnant of a planetesimal that was blown apart. Previous computational modeling of Psyche resulted in the best crater-dimension matches using Monel, Caldwell said, an alloy based on “sky metal” ore found at Sudbury crater in Canada, indicating it is likely from the Sudbury impactor of extraterrestrial origin.

Understanding asteroid composition is key to improving simulations of deflecting an asteroid to alter its course in the event of a potential collision with Earth, a scenario unlikely to occur in our lifetimes but almost certainly an eventuality over long time scales.

Modeling deflection of solid asteroids is more computationally accessible than modeling rubble piles and, as a result, more of these simulations appear in the related literature. However, to be truly prepared from a planetary defense perspective, all types of asteroids should be considered in computational models, Caldwell said.

Caldwell and co-author and Los Alamos program manager Cathy Plesko also conduct modeling studies supporting NASA’s DART mission, which launched in November and will nudge Dimorphos, a small asteroid orbiting the larger asteroid Didymos, to test the viability of deflecting an asteroid with a kinetic impactor—essentially acting as a space cannonball. Neither Didymos, which orbits the Sun between Earth and Mars, nor Psyche, which orbits between Mars and Jupiter, pose any threat to Earth.