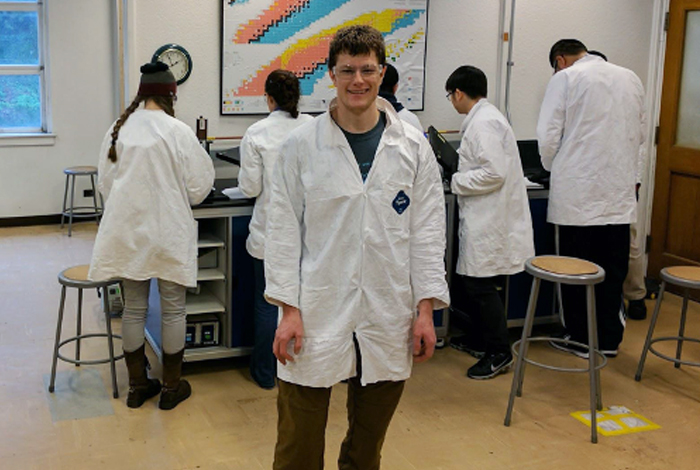 Mark Straub at work in the Chemistry Lab at UC Berkeley.

In 2017, Mark Straub left the academic environs of UC Berkeley, where he was a radiochemistry graduate student, to move to Los Alamos to spend his summer vacation as part of the Robert Keepin Nonproliferation Science Summer Program. During his time here, Straub teamed up with scientists Jaqueline Kiplinger (C-IIAC) and Julianna Fessenden (XTD-NTA) to study the impact and evolution of nuclear forensics, interviewing experts and touring Laboratory facilities.

Straub’s interest in this project continued after he left the program, spurring a multi-year collaborative effort between UC Berkeley and LANL which resulted in a review article, “Recent Advances in Nuclear Forensic Chemistry,” that is featured as the cover story in a special issue of Analytical Chemistry released on Jan. 12.

The Robert Keepin Nonproliferation Science Summer program is a component of the prestigious Nuclear Science and Security Consortium(NSSC) fellowship, an opportunity made available by the National Nuclear Security Administration through a $25M award to UC Berkeley. The NSSC, led by Professor Jasmina Vujic in Berkeley’s Department of Nuclear Engineering, trains the next generation of nuclear scientists and engineers while engaging in research and development that supports the nation’s nuclear security and nonproliferation mission. All NSSC fellows are connected with a mentor at a DOE national laboratory that the students work with throughout their academic careers. The NSSC also organizes summer programs and projects that allow students to work on-site at the national laboratories. With continued support from the NSSC, the authors included perspectives on nuclear forensics from academic researchers, government scientists, and nuclear policy specialists.

Nuclear forensics research is critical to national security, as rapid chemical analysis of seized radioactive material is imperative to prevent the construction and detonation of an illicit nuclear weapon.  Within the past decade, advancements in chemistry and nanoscience have revolutionized the capabilities accessible to nuclear forensic chemists, enabling complex analysis of samples that would previously be considered undetectable.  New case studies using fallout from the Trinity Test Site and the Hiroshima detonation site have redefined the paradigm for real-world nuclear forensic analysis, and specialized materials have been synthesized as fallout surrogates and radionuclide traps.  This review of nuclear forensics highlights new compounds and materials, recent case studies, and state-of-the-art capabilities for pre- and post-detonation nuclear forensics and environmental monitoring within the last ten years.