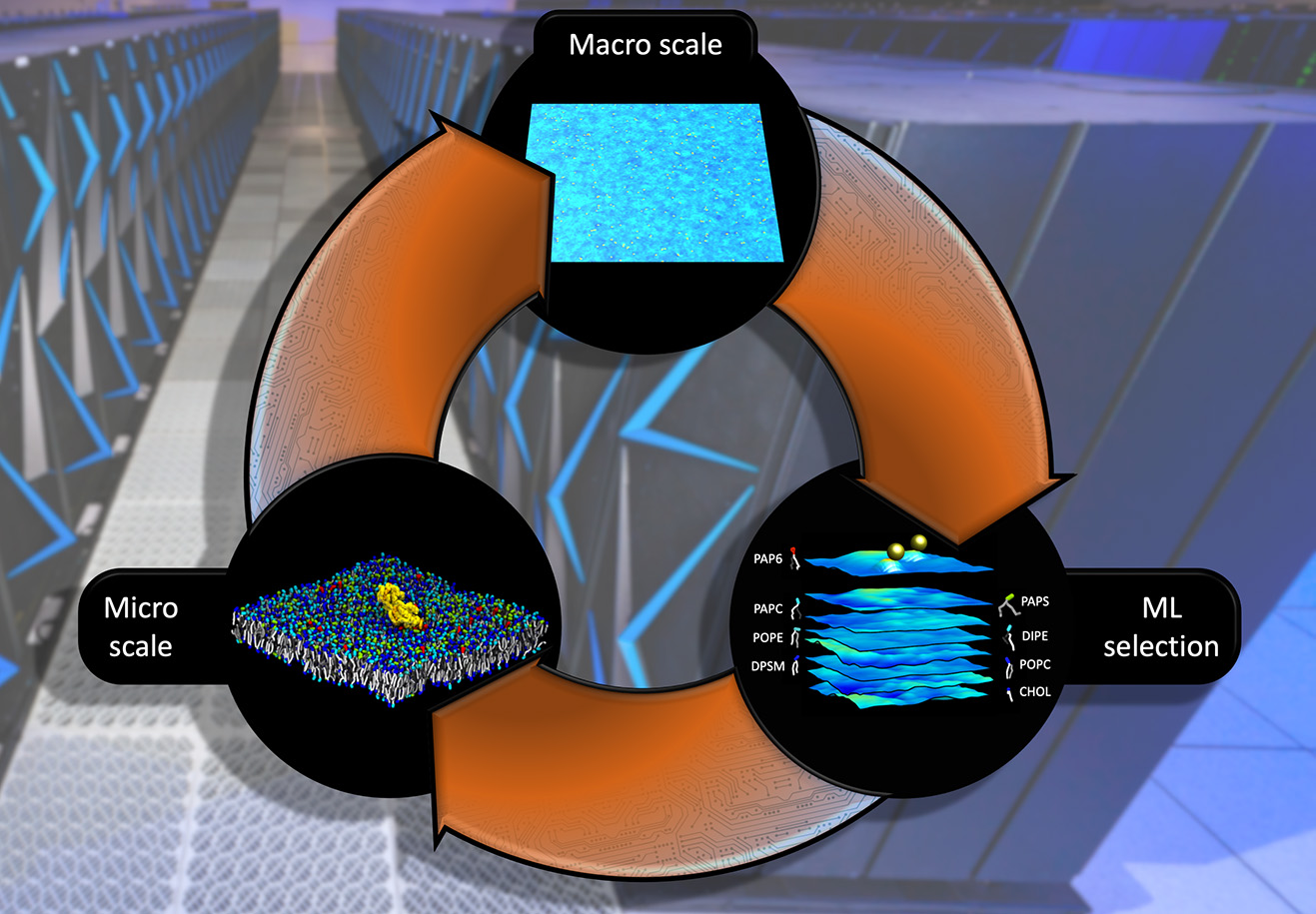 A multi-institutional team of scientists has developed a highly detailed, machine learning-backed multiscale model revealing the importance of lipids to the signaling dynamics of RAS, a family of proteins whose mutations are linked to numerous cancers.

The Los Alamos team worked closely with Lawrence Livermore National Laboratory (LLNL) and the National Cancer Institute’s Frederick National Laboratory for Cancer Research (FNLCR) on connecting these multi-scale simulations to the RAS biology through biophysical interpretation and analysis of the simulations. ”Essentially, the Los Alamos team served as a conduit between the computer science and biology,” said Gnana Gnanakaran, co-author and Los Alamos lead for this project.

Tens of thousands of simulations evaluated

Published by the Proceedings of the National Academy of Sciences, the paper details the methodology behind the Multiscale Machine-Learned Modeling Infrastructure (MuMMI), which simulates the behavior of RAS proteins on a realistic cell membrane, their interactions with each other and with lipids — organic compounds that help make up cell membranes — and the delicate relationship between RAS orientation and RAS-RAS interaction, on a macro and molecular level, that provided molecular insights on the activation of signaling through the RAS.

The paper also discusses the team’s findings from using the framework to model how RAS binds to other proteins and how different kinds of lipids dictate the way RAS collects and positions itself on the cell membrane. Evaluating tens of thousands of simulations, the team captured all previous protein interactions and many more RAS interfaces.

The data indicates that lipids — more than protein interfaces — govern both RAS orientation and accumulation of RAS proteins. Mutated RAS proteins can become stuck in an uncontrollable, “always on” growth state. This state is indicated in the formation of about 30% of all cancers, particularly pancreatic, lung and colorectal cancers.

“We always knew lipids were important; you need some of them, otherwise you don’t have this behavior. But after that, scientists didn’t know what was important about them,” said Lawrence Livermore computer scientist and first author Helgi Ingolfsson. “This work is showing us that lipids are a key player. By modulating the lipids and different lipid environments, RAS changes its orientation, and you can potentially change the signaling [between ‘grow’ and ‘not grow’] by changing the lipids underneath. Now we have an enormous sample of simulations, and we can see how RAS interacts in all our simulations at different orientations.”

The team simulated a one micron-by-one micron patch on Livermore’s Sierra supercomputer and observed how hundreds of different RAS proteins interacted with eight kinds of lipids. They created more than 100,000 smaller molecular dynamic simulations from machine learning-selected “interesting” snapshots of the larger macro model simulation, enabling them to determine the probabilities of RAS binding to other proteins with a given orientation on a cell membrane.

Scientists at FNLCR performed the microscopy, biophysical, biochemical and structural biology experiments needed to parameterize the simulations. Combined with experimental results, the work demonstrates the strong link between lipids and RAS orientation and RAS-RAS association probability. Researchers found only specific RAS orientations could bind with other proteins to induce signaling behavior and that association probability is lipid-dependent — knowing only lipid compositions, scientists could potentially predict the orientation of RAS on the membrane.

“Scientists know that RAS has to create the signal, and they know RAS has to get closer to another RAS, but they don’t know why, and they don’t know necessarily how at an atomistic level,” said co-author and Livermore Biochemical and Biophysical Systems Group Leader Felice Lightstone. “The insights here confirmed experimental results that tend to be controversial when you don’t have really precise measurements. For the RAS signaling pathway to continue, you need to bind to a RAF, and certain orientations make it impossible to bind and continue the signaling cascade.”

“The simulations generated insights into the molecular details of the process by which KRAS promotes cancer,” said Director of FNLCR’s Cancer Research Technology ProgramDwight Nissley, NCI’s lead for the JDACS4C Pilot 2 project. “Further studies will focus on mechanisms of cancer initiation that may reveal new therapeutic opportunities.”