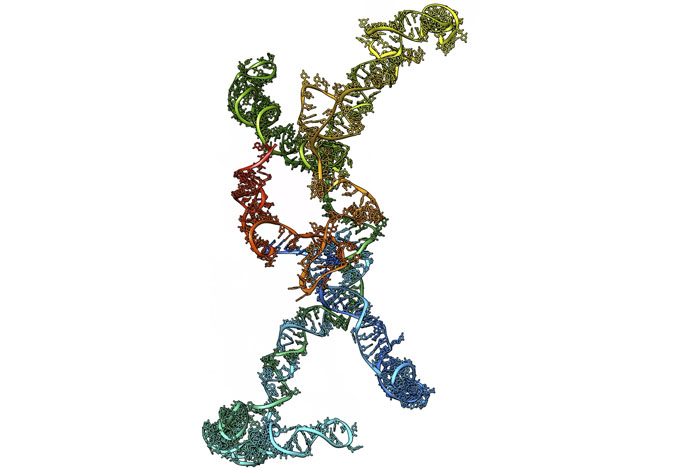 The first 3-D images have been created of an RNA molecule known as "Braveheart" for its role in transforming stem cells into heart cells.

LOS ALAMOS, N.M., Jan. 9, 2020—Scientists at Los Alamos and international partners have created the first 3-D images of a special type of RNA molecule that is critical for stem cell programming and known as the “dark matter” of the genome.

“As far as we know,” said corresponding author Karissa Sanbonmatsu, “this is the first full 3-D structural study of any long, non-coding RNA (lncRNA) other than a partial structure.” Sanbonmatsu is a structural biologist at Los Alamos National Laboratory. “A better understanding of these RNAs could lead to new strategies in regenerative medicine for people with heart conditions due to cardiovascular disease or aging.”

The team used a technique called small angle X-ray scattering (SAXS) that reveals the 3-D envelope of the RNA molecule, according to Trushar Patel, a Canadian professor on the team. Next, with the help of machine learning and high-performance computing, they made atomistic models to fit inside the envelopes – this included the creation of an atomistic model that is also the longest of an isolated RNA (636 nucleotides) to date, said Doo Nam Kim, lead author on the Nature Communicationspaper.

“Our work represents the first step in showing that these difficult-to-image RNAs do possess 3-D structures, and that these molecular structures may very well determine how they operate,” said Sanbonmatsu. “The RNA studied is called “Braveheart” – it triggers the transformation of stem cells into heart cells,” she said.

Before the human genome was sequenced in 2000, it was thought that it mostly contained instructions for proteins, the workhorse molecules of human cells. Scientists were shocked to discover that less than 10 percent of the genome encoded proteins. Ever since, the other 90 percent was deemed to be “junk DNA” or “dark matter.” Enter RNA, the molecular cousin of DNA. Scientists originally assumed the main purpose of RNA was simply to coordinate as a messenger for DNA in the synthesis of proteins. However, it has recently been shown that more than 90 percent of the genome encodes a new and mysterious class of RNAs, called long non-coding RNA molecules (lncRNA).

These RNA molecules help to control the turning on and off of genes; their malfunction causes birth defects, autism and even cancer in some cases. They are also key to reprogramming adult stem cells. Even though the molecules make up 90 percent of the genome, scientists have almost no idea how they work, or even what they look like. In this study, one of the largest RNA-only 3-D studies, the new 3-D images sets the stage  for future studies that will shed more light on how they control genes.