1963 Nobel Laureate paved a path for female scientists; advised the next generations to 'carry on.' 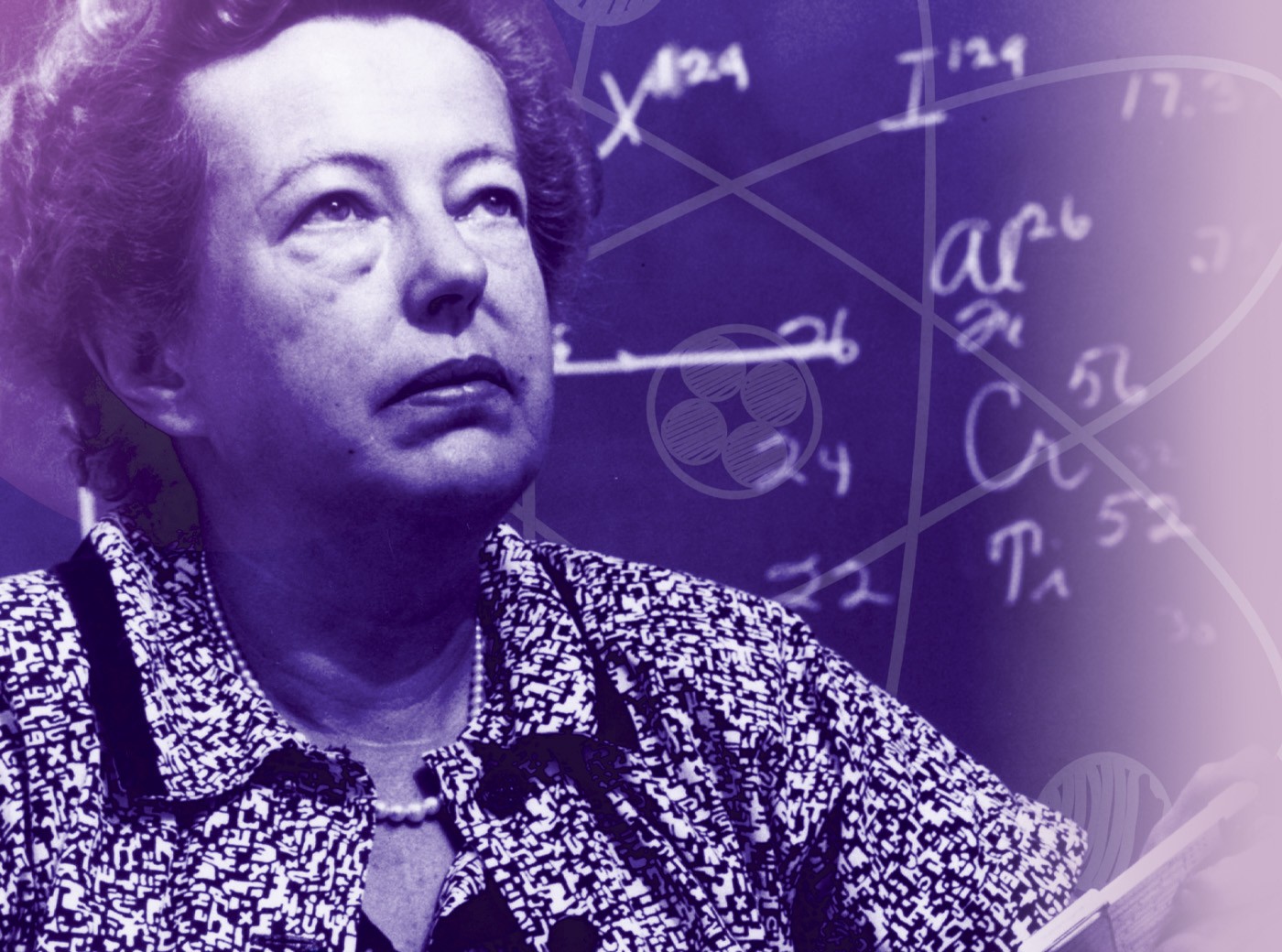 Photo courtesy of the U. S. Department of Energy.

Her father was a sixth-generation professor and she was to be the seventh. To him, his daughter's gender was irrelevant, but rules at universities regarding the wife of a fellow academic would soon complicate the Goeppert family's succession plan.

For many years, each time her husband was offered a professorship, Goeppert Mayer was denied a similar position at the same university despite her formidable qualifications. Instead, she held volunteer positions, allowing the universities to benefit from her incredible scientific abilities without having to pay her a salary.

She described her unpaid work as "just for the fun of doing physics." These efforts ultimately made significant contributions to the fields of nuclear physics, physical chemistry, mathematics, and earned her global recognition.

Near the end of her career, in 1963, she shared half of the Nobel Prize in Physics for her work on the nuclear shell model, which is the basis for understanding nuclear structure.

Goeppert Mayer was just the second woman to be awarded the prize in physics and it would be 55 years before the third.

Among her great achievements, Goeppert Mayer contributed to the Los Alamos Laboratory's efforts to create a nuclear weapon and help end World War II, ushering the world into the Atomic Age.

Goeppert Mayer attended public and private schools and entered Gӧttingen University in the fall of 1924. She began her studies in mathematics. At the request of Max Born, a family friend and professor of theoretical physics, she joined his quantum mechanics seminar. It was during this seminar that she discovered she preferred theoretical physics to mathematics, so she changed her course of study and became Born's doctoral student.

In 1928, Goeppert Mayer met Joseph Mayer, an American chemist on fellowship at Gӧttingen University. Joe arrived at the home Goeppert Mayer shared with her mother to inquire about renting a room. Because of the financial strain caused by Friedrich Goeppert's sudden death the year before, the family was renting rooms to students.

It wasn't until 1941 that Goeppert Mayer was offered her first paid job: a substitute position at Sarah Lawrence College. She taught mathematics that first year, and in June 1942 she was reappointed to the science faculty. During the '42-'43 academic year, Goeppert Mayer taught four courses: two in mathematics, one in physics, and one in physical chemistry. She was also still a volunteer chemistry lecturer at Columbia.

In September 1943, Urey, now the director of the Substitute Alloy Materials (SAM) Laboratories at Columbia, needed an expert in spectral analysis to lead a team researching the photochemical method for uranium isotope separation. Urey was familiar with Goeppert Mayer's earlier work and knew she was the right person for the job. He wrote to the president of Sarah Lawrence College, requesting a one-year leave of absence for Goeppert Mayer to return to Columbia full time for "an important war project."

The SAM Laboratories were conducting research for the Manhattan Project, which was the U. S. -led effort to create the world's first atomic weapons. The focus of the wartime research at Columbia was looking into the uranium isotope separation processes required to produce the weapons-grade uranium desperately needed by the scientists at the clandestine Los Alamos Laboratory.

Urey's request was granted, and Goeppert Mayer returned to Columbia full time. Goeppert Mayer supervised a team at the SAM Laboratories that was researching the photochemical method for uranium isotope separation. This work involved analyzing the spectra of uranium-235 and uranium-238.

Within a few months, the photochemical method was deemed impractical and was abandoned. Goeppert Mayer was moved to the team researching gaseous diffusion. Gaseous diffusion and electromagnetic separation were deemed more practical, given the time constraints of producing a weapon before the Nazis had their own.

Meanwhile, in late May of 1944, Los Alamos Laboratory Director J. Robert Oppenheimer and physicist Edward Teller needed a group that could undertake opacity calculations, which dealt with the properties of radiation at high temperatures. Oppenheimer asked General Leslie Groves, leader of the secret wartime creation of the atomic bomb known as the Manhattan Project, to allow the work to take place at the SAM Laboratories at Columbia. When it came to deciding who should lead the Opacity Project, Goeppert Mayer was an obvious choice. She was already involved with the Manhattan Project efforts and was a skilled mathematician and theorist, the head of a team of researchers, and an expert in spectral analysis.

With Groves's approval, Goeppert Mayer was hired as a consultant for Los Alamos. Teller would oversee the project from Los Alamos, as his frequent travels to New York for other Manhattan Project business would allow him to meet with Goeppert Mayer at Columbia without raising suspicions.

At the SAM Laboratories, Goeppert Mayer enlisted the help of two of her graduate students and the three began work on the opacity calculations and were in regular communication with Teller. On May 21, 1945, Goeppert Mayer arrived in Los Alamos to continue the opacity calculations with Teller. While not directly beneficial to the development of the fission weapons at Los Alamos during the war, the calculations were later applied to the development of the hydrogen bomb.

In July, Goeppert Mayer was offered the position of senior physicist at the newly formed Argonne National Laboratory in Chicago. She continued her unpaid professorship at the University of Chicago, while working part time at Argonne. It was at Argonne that Goeppert Mayer would develop the nuclear shell model that would later earn her the Nobel Prize.

Goeppert Mayer was working on a project with Teller to determine the origin of elements. They were looking at isotope abundances when Goeppert Mayer observed patterns. She noticed that nuclei with 2, 8, 20, 28, 50, 82, or 126 protons or neutrons were stable (known as the magic numbers). She recognized the importance of these numbers and speculated they could help describe the structure of the nucleus, and perhaps nuclei had a shell structure similar to the electron shell structure in atoms. Goeppert Mayer was not the first to notice this phenomenon, which was studied in the 1930s, so she reviewed the earlier research and continued to study the data.

By 1948, she had the data, but not the theoretical explanation for the shell structure of nuclei. She presented her data in a paper "On Closed Shells in Nuclei, " published in the Physical Review journal that same year. Early the next year, during one of many discussions of shell structure with physicist Enrico Fermi, he remarked, "Is there any indication of spin-orbit coupling? " This was the breakthrough Goeppert Mayer needed. She now had her theoretical explanation for shell structure, and the spin-orbit-coupling shell model of nuclei was presented in the February 4, 1949 issue of the Physical Review. Around this same time J. Hans D. Jensen, a German physicist, came to the same conclusions as Goeppert Mayer. The two met in 1951 and started a collaboration that culminated in 1955 with the publication of their book, Elementary Theory of Nuclear Shell Structure.

In 1960, Goeppert Mayer accepted a full professorship in physics at the University of California at San Diego. It was a paid position.

Soon after arriving in San Diego, Maria had a stroke at the age of 53, which would affect her health for the remainder of her life. However, she continued to teach and contribute to the field of physics.

In 1963, Goeppert Mayer was awarded the Nobel Prize in Physics alongside Jensen. The other half of the prize that year was awarded to Eugene Paul Wigner for unrelated work.

Goeppert Mayer died on February 20, 1972, after suffering from a heart attack and spending weeks in a coma. She was survived by her husband, daughter, and son.

According to the Scientific American, before her death Goeppert Mayer told a group of high school girls, "Become fully educated women and promote the understanding of science in any way you can. Our country needs your help. My generation has played its part. It is up to you to carry on." 🔎