The second director was known as both the savior of Los Alamos and the architect of our Lab today.

He diversified the Laboratory from its Manhattan Project mission after World War II and was known as both the savior of Los Alamos and the architect of our Lab today.

He stayed for 25 years, becoming the longest serving of the Lab’s 12 directors. Other notable accomplishments during his tenure include:

Bradbury was born in California on May 30, 1909. He graduated from high school at 16 and studied chemistry and physics at Pomona College. He continued his education at the University of California – Berkeley, where he earned his Ph.D. in physics in 1932 when he was just 23 years old. Three years later, Bradbury joined the physics faculty at Stanford University. Bradbury married Lois Platt in 1933, later explaining, “Lois was the sister of my roommate in college. She was engaged to someone else. The engagement fell apart and I moved in.” The couple had three sons together and were married for 64 years. 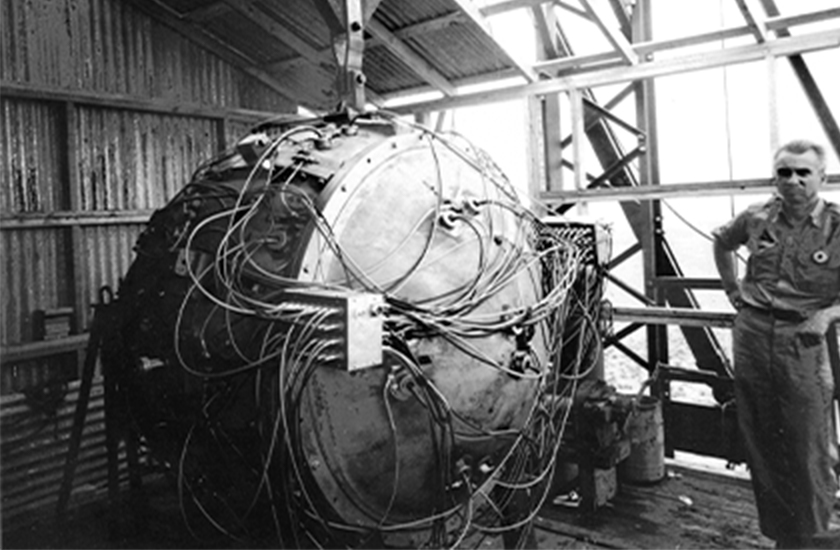 Commissioned to the Navy Reserve in 1941, Bradbury was stationed at the Naval Proving Ground in Dahlgren, Virginia, until 1944. It was then that Bradbury joined the Manhattan Project in Los Alamos, where he was appointed to lead the implosion field test program.

At the Trinity test site, which today is White Sands Missile Range, Bradbury was placed in charge of the assembly of all nonnuclear components of the world’s first nuclear weapon called the Gadget (pictured above).

The Gadget’s successful detonation was July 16, 1945, with the bombings on Hiroshima and Nagasaki just weeks later on August 6 and 9, respectively. The Japanese surrendered on August 14, 1945, and WWII officially ended on September 2, 1945. 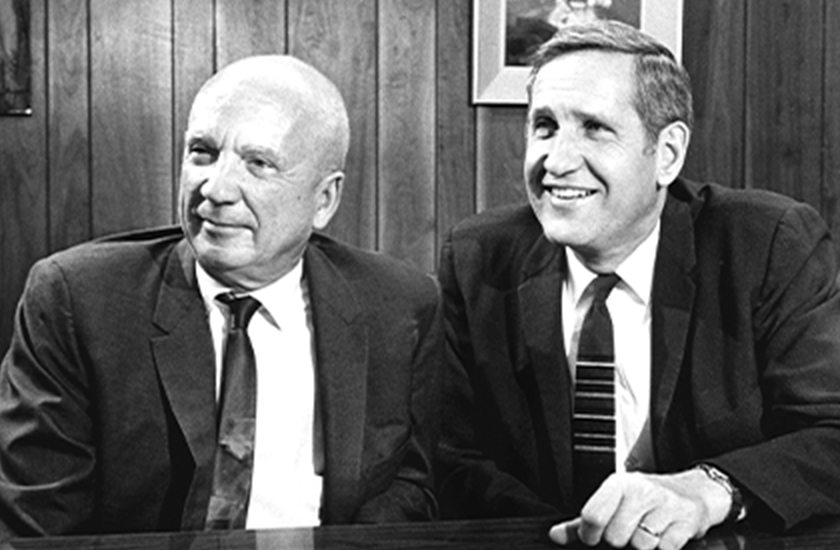 Shortly thereafter, J. Robert Oppenheimer resigned as the Lab’s director, though both Oppenheimer and Gen. Leslie Groves, the Manhattan Project director, felt that the Lab’s national security work should continue.

While Oppenheimer believed that an individual with a scientific background would best meet the criteria to succeed him, Groves wanted a person who had a military background to run the institution. Discussing this, the two thought the best candidate for the job was none other than Bradbury.

At the time he accepted the position, Bradbury thought he could have been Los Alamos’s last director — the wartime mission of Laboratory was complete and many of the scientists and other staff had left the mesa. Bradbury said the first few months as director were uncertain and undeniably tough. 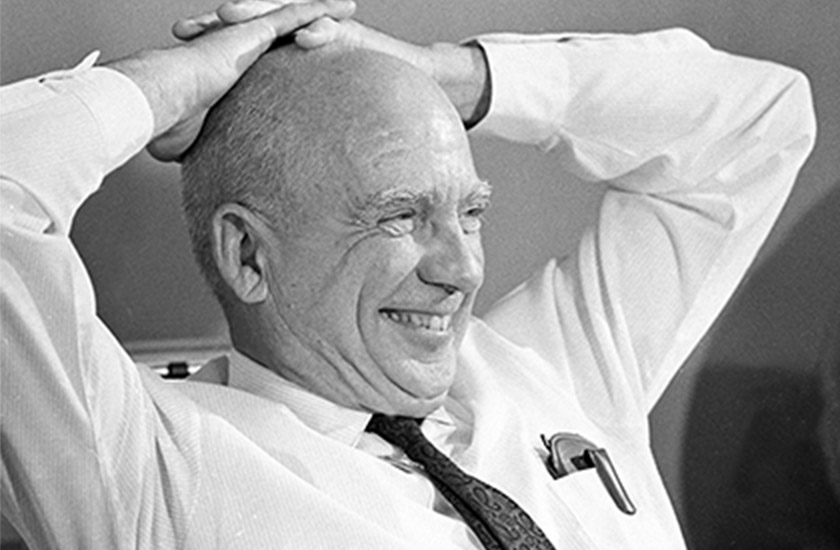 Bradbury also reshaped the community of Los Alamos. Many of the Manhattan Project Laboratory facilities were demolished and the Laboratory was relocated to its present-day location. New homes, apartment complexes, and local businesses would be built for the Lab staff and their families for their lives on the mesa.

In 1970, Norris was bestowed the Enrico Fermi Award, which is the government’s oldest science and technology award and honors a lifetime of achievement. This same year, Bradbury retired from the Lab and Harold Agnew (pictured above with Bradbury) succeeded him as the third director.

The Lab’s museum and science hall were renamed in Bradbury’s honor. Bradbury and his wife continued to live in Los Alamos. Bradbury died at the age of 88 in August 1997 and Lois died in January 1998.

“For me to say I had any deep emotional thoughts about Trinity (the first nuclear weapons test)… I didn’t. I was just damned pleased that it went off.”

On what he considered a necessary but temporary evil: “Nobody likes atomic bombs; I hate them. But it has to be done ...”

“To bring peace by threatening war is possible; to bring peace by requesting and promising cooperation seems more dignified. But the request and the promise, and surely the threat, are both fortified by weaponeering now.”

“One hopes that weapon emphasis will decrease with time. We are not a warring nation – the mere possession of weapons does not bring about war.”

“I, myself, with considerable knowledge of nuclear things, with some knowledge of their military use, but with only a plain citizen’s feelings about people and nations and hopes and fears would prefer to try to follow the path of hope.”

What others said about Bradbury:

“He lived as though he were killing snakes every minute of the day.”

“Whatever he was doing, it was always zip, zip, zip.”

“His office door was open all day, except when he was in conference. He answered his phone himself unless he was already on the line.”

“He was a nice man; both fair and honest.”