Letting the world know the United States has a secure, safe, and effective stockpile starts with the NSRC.

It’s for the President of the United States, from Los Alamos National Laboratory.

One of the most important accomplishments every year at LANL is a letter sent by the Laboratory Director that ultimately reaches the President of the United States. The subject is the current state of the weapons for which the Lab is responsible. Known as the Annual Assessment letter, it is a culmination of nearly 14 months’ worth of work and the contributions of more than 1,000 Lab staff members. Its classified contents come from the Lab’s Annual Assessment, which is an approximately 100-page document evaluating the safety, security, and effectiveness of the stockpile. 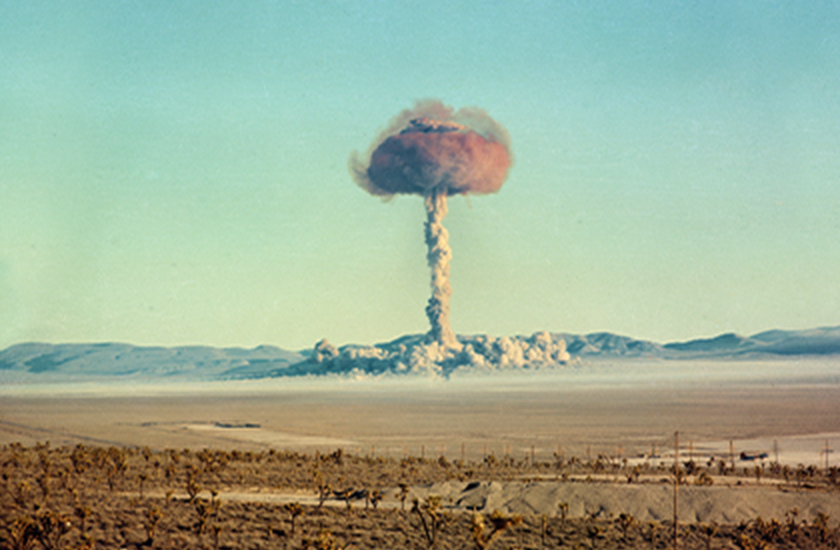 Nakhleh leads the Weapons Physics Directorate, which includes the NSRC – the Lab’s classified library that houses nuclear weapons information dating back to the start of the nuclear enterprise. The collections contain tens of millions of records, including test shots, scientific datasets, and engineering processes. In many cases, the materials do not exist anywhere else.

“The NSRC is the starting point every year for our Annual Assessment,” said Kevin Smale, the Lab’s Annual Assessment coordinator. “The contents of the assessment and its letter are based on data from the NSRC – everything we need, it’s all captured in the data.”

The assessment reports and letters come from the Los Alamos, Sandia, and Lawrence Livermore national laboratories, as well as the Department of Defense’s United States Strategic Command. They are provided to the Secretaries of Energy and Defense, who give them unaltered to the President of the United States, along with comments or conclusions, every February.

In March, the President forwards the Secretaries’ reports, the annual assessment letters, and any of his comments to Congress.

“Every year, the Lab is able to provide the nation’s highest levels of leadership with confidence in the health of the U.S. nuclear stockpile,” Smale said. “That certainty comes from the information the Lab has in the NSRC. Those data are the life of today’s nuclear weapons and the proof is in all that history.”

Confidence in the absence of testing

In the past, assurance that our nation’s nuclear stockpile was effective came in large measure from weapons testing, said Michael Bernardin, a LANL Associate Scientist and retired Associate Laboratory Director of the Weapons Physics Directorate.

“Today – and for the past 26 years – that confidence in the safety and reliability comes from the Annual Assessment,” Bernardin said.

The Annual Assessment program began in the 1990s along with the DOE’s establishment of the Stockpile Stewardship Program, or science-based surety of the country’s nuclear weapons in lieu of testing. The United States has not conducted a full-scale, underground nuclear weapons test since Sept. 23, 1992. This final test, called Divider, was a Los Alamos-designed weapon and took place at the Nevada Test Site.

Divider was the nation’s 1,054th nuclear test over a 47-year period. The dawn of the Atomic Age began with the Lab’s Trinity test on July 16, 1945. Just weeks after the Trinity test, the Los Alamos-created Little Boy and Fat Man nuclear weapons were released above Japan days apart in August 1945, helping to bring an end to World War II shortly thereafter. Little Boy and Fat Man were the only two nuclear weapons to ever be used in combat. 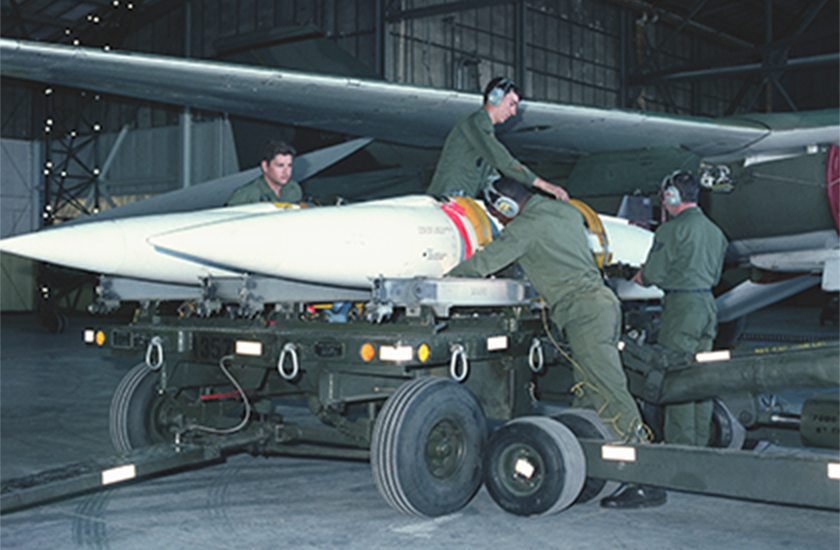 The Stockpile Stewardship program was initiated to enable the United States a foundational basis necessary to ensure it still has a safe, effective nuclear deterrent. As such, a continual assessment of the weapons’ safety, reliability, and performance would be conducted and an evaluation would be produced annually. Data from the days of testing are critical to conducting these evaluations. Much of these data come from the Lab’s classified library.

“Our nation has spent billions of dollars developing and testing nuclear weapons, the details of which are maintained by the NSRC,” said Riz Ali, Director of the National Security Research Center. “The NSRC’s collections are essential in helping the Lab’s senior scientists and engineers determine the viability of our nuclear stockpile. It is this information that allows the Lab Director to present the President of the United States with an accurate assessment of the health of our nation’s nuclear deterrent year after year.”

Weapons continuously age and are not designed to last indefinitely. To assess the aging of weapons, and to design and certify weapons alterations or life extensions, the Lab’s weapons designers and engineers rely on scientific and engineering capabilities. These include the use of existing or emerging experimental facilities, the use of weapons modeling and simulation, and the use of historic nuclear-explosive and non-nuclear-explosive test data, Bernardin said.

“Stewardship of the nuclear stockpile is our primary mission as a nuclear weapons laboratory,” Bernardin said. “Today’s confidence in our stockpile comes from stockpile surveillance, new experiments, ever-advancing theoretical work and detailed simulations, and a deep understanding of our rich history.”

The Lab’s Weapons Program scientists and engineers are continually adding to and drawing upon this vast collection of information to support analyses and assessments, specifically the NSRC’s electronic repositories for weapons physics and weapons engineering-related research, said Chris C’de Baca, Group Leader for the NSRC.

For example, the NSRC houses nuclear test shot folders on the nation’s underground and atmospheric nuclear tests as well as the numerous non-nuclear hydrodynamic tests (which use high-speed instrumentation) and subcritical tests (where no nuclear yield is generated). These folders contain drawings of parts, nuclear-device assemblies, the diagnostic spread, test-stand rack layouts, and documentation on all of the acquired nuclear-test data. For atmospheric tests, there are films, and in some cases, extensive measurements of nuclear weapons effects. 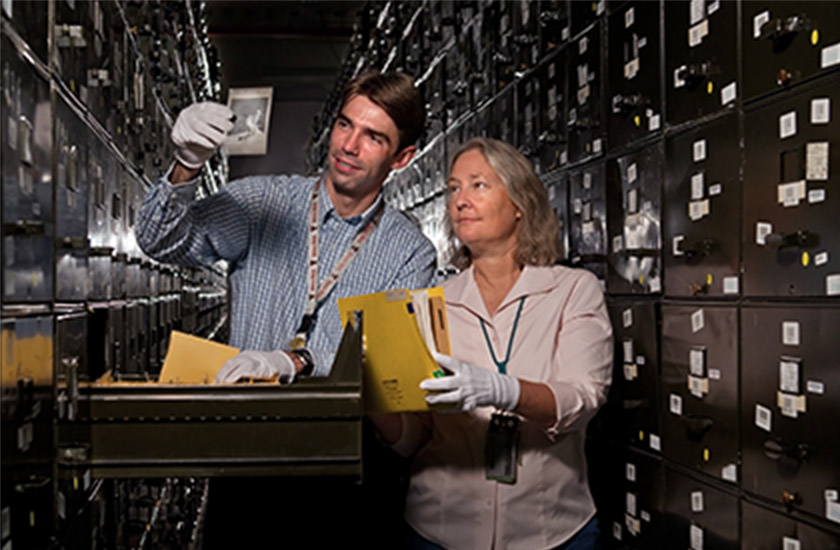 “If a researcher needs something in our collections, we’ll find it for them,” he said. “If it exists elsewhere in the Nuclear Security Enterprise, we’ll connect them to it.”

Prior to the onset of the COVID-19 pandemic in 2020, it was common for more than 100 of the Lab’s weapons scientists and engineers to access daily the NSRC’s records in support of their research, including for Greg Archbold and his team.

Archbold, who is the Deputy Division Leader of X Theoretical Design (XTD), said, “The Lab would be unable to effectively conduct Annual Assessment activities without the NSRC, its collections, and our partnership with the staff. All these resources inform the models and simulations employed in the Annual Assessment process.”

XTD staff, he said, look to the NSRC for design history, test and experiment configurations and data, and technical reports from previous work, which inform the models and simulations employed in the Annual Assessment process.

“The aggregate of all those materials in the NSRC,” Archbold said, “is why we are confident in the surety of our nation’s stockpile.”

“A deterrent is only credible if it is effective,” he said. “The Annual Assessment letter that the Lab provides the President of the United States assures him – and the world – that America’s nuclear stockpile remains safe, secure, and effective. We need the NSRC to do that.”

Annual Assessment at a glance:

“The NSRC’s collections are essential in helping the Lab’s senior scientists and engineers determine the viability of our nuclear stockpile. It is this information that allows the Lab Director to present the President of the United States with an accurate assessment of the health of our nation’s nuclear deterrent year after year.” — Riz Ali, NSRC Director

What is the Annual Assessment? A yearly process in which the Lab, among other entities in the Department of Energy’s National Nuclear Security Administration and the Department of Defense, evaluate the safety, reliability, performance, and effectiveness of the U.S. Nuclear Weapons Stockpile.

What is the Annual Assessment letter? The lab directors at Los Alamos, Sandia, and Livermore write a letter that outlines their evaluations of each nuclear weapon system in the stockpile. There are seven nuclear weapons systems in the U.S. stockpile and five were designed by LANL: the B61 gravity bomb, the W80 cruise missile warhead, and the W76, W78, and W88 ballistic missile warheads. Today, LANL provides assessments for the B61, W76, W78, and W88.

Who receives the Annual Assessment letter? The President of the United States, via the Secretaries of Energy and Defense, who are required to submit the letter unaltered along with any conclusions they may have. The President has until March 15 to forward this yearly letter and any comments to Congress.

What does the letter include? The letter addresses four items:

Why does the Annual Assessment exist? The assessment verifies that our country maintains a credible nuclear deterrent in the absence of nuclear testing, which stopped on Sept. 23, 1992, following the U.S. execution of the Divider test (a Los Alamos-designed nuclear explosive). In the absence of testing, it is still necessary to ensure the nation has a safe, effective nuclear deterrent. A national stockpile stewardship and management program supports the Annual Assessment. At the core of this program is science-based experimentation and simulation, a part of LANL’s national security mission.

Why is the assessment conducted yearly? Weapons age as a result of intrinsic radiation, chemical reactions, and operational environments, such as transportation vibrations and temperature swings. As such, they must be evaluated annually.

Who at Los Alamos has a role in the Annual Assessment? Although the Annual Assessment letter comes from the Director’s Office, a large portion of the Lab contributes in some way, ranging from Weapons Program teams who perform the hands-on work to staff in the NSRC (the Lab’s classified library) who manage nearly 80 years of nuclear weapons research and testing data.