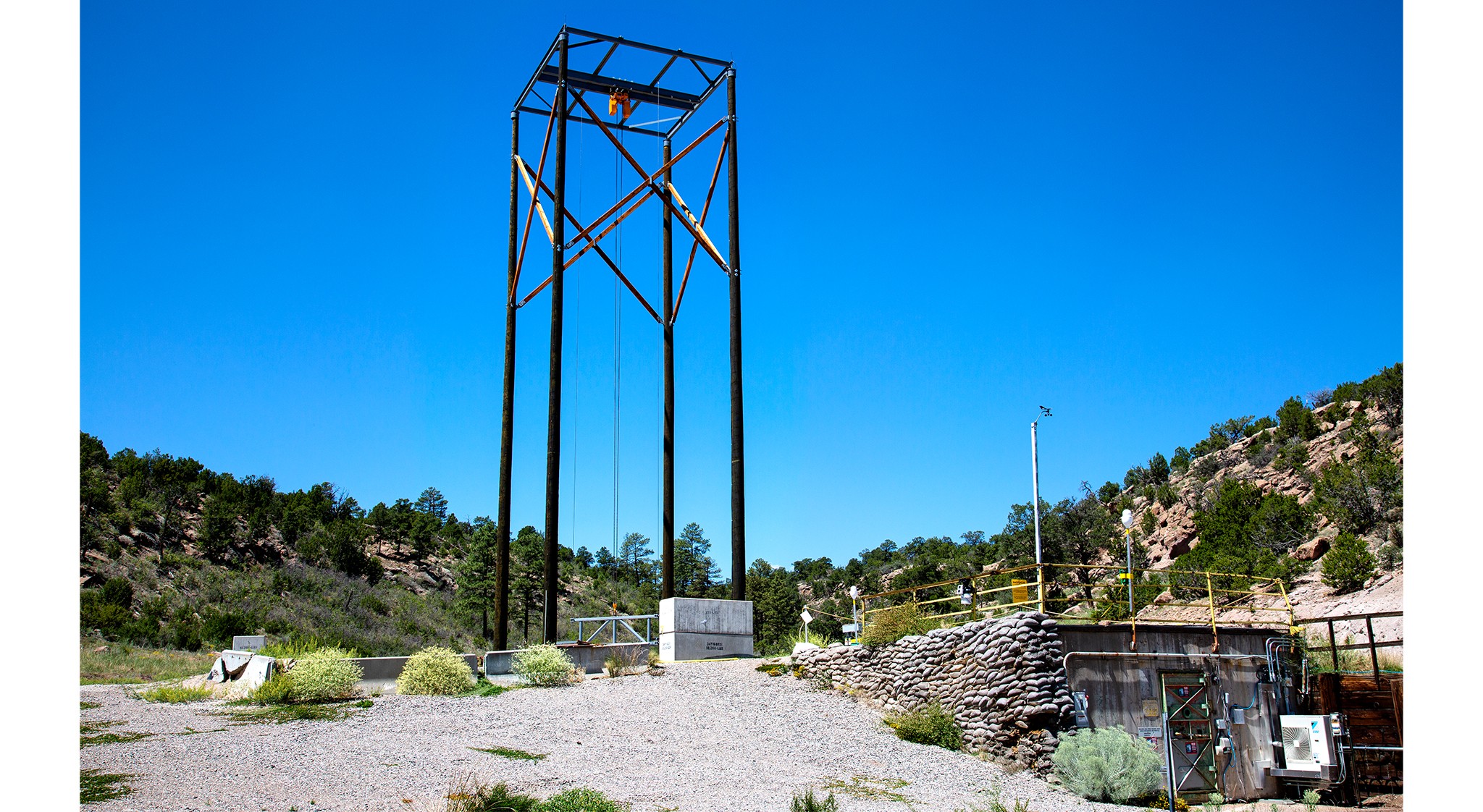 Up to 4,500 pounds—about the weight of a compact car—can be dropped from the Laboratory’s new drop tower. Los Alamos National Laboratory

What if the unexpected happens and a high-explosive (HE) device falls accidentally? Will it detonate? To find out, the Lab built a very large tower, dropped a device, and studied the effects. “A drop test is an experiment in which you subject an article to a free-fall and rapid deceleration, then assess its response,” explains Ray Guffee of the Lab’s Dynamic Structure and Engineering group, who served as lead engineer and project manager for the new drop tower.

The tower was built at the Lab’s Meenie/Bravo firing site, which includes a bunker that needed repairs to accommodate the new tower structure and return the site to service. “We reconstituted an aging facility practically overnight,” notes James Owen, associate Laboratory director for Weapons Engineering.

The new 90-foot-tall tower can drop up to 4,500 pounds from about 70 feet. Data from drop tests can be captured using high-speed photography, radiography, accelerometers, and other diagnostics.

Constructed during the pandemic, the tower and facility upgrades were completed one month early and under budget. The tower was used for the first time in April 2021 when the W88 Alteration and Refresh Programs group tested the response of a mock W88 warhead containing live HE. The test simulated an accidental drop scenario, which demonstrated that the HE would not inadvertently react.

Members of Los Alamos’ Focused Experiments group and others from across the Laboratory deployed high-speed cameras and measured onboard accelerometer diagnostics to provide direct dynamic response data. The test was successful—no kaboom—with high-quality data return.

The new drop test tower “allowed us to assess weapon safety and deliver a critical stockpile test just in time to support modernization of the W88 Alt 370,” Owen says. (Click here for more on the W88 Alt 370, which is an update to the W88 warhead that can be launched from missiles on submarines.)

“Furthermore,” Owen continues, “the tower re-establishes a critical capability to assess weapons safety performance in the future.” Going forward, a range of devices can be dropped—from weapon-related devices to storage and transportation containers. The possibilities are almost endless.