Why arctic soil can go slip-sliding away

‘Dripping’ effect of some landscapes matches paint, new research suggests how that happens 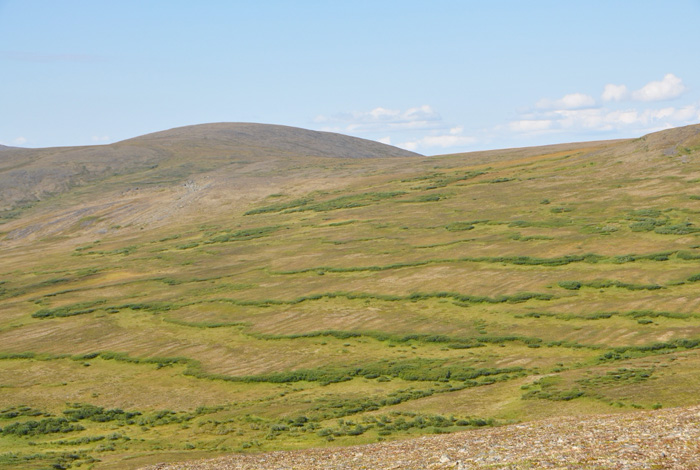 A particular type of soil movement in the arctic called solifluction shares features of dripping paint and melting cake icing. Now scientists know why and how this happens.

LOS ALAMOS, N.M., June 7, 2021—Slow-moving arctic soils form patterns that, from a distance, resemble those found in common fluids such as drips in paint and birthday cake icing. Los Alamos researchers and their collaborators analyzed existing arctic soil formations and compared them to viscous fluids, determining that there is a physical explanation for this pattern that is common to both Earth and Mars landscapes.

“The study of this effect is especially important as we measure landscape response to climate change and aim to understand the storage and release of permafrost carbon in arctic landscapes,”

“The study of this effect is especially important as we measure landscape response to climate change and aim to understand the storage and release of permafrost carbon in arctic landscapes,” said Rachel Glade, first author on a paper in the journal PNAS. “As we see permafrost thaw across the arctic, we will need to be able to predict and mitigate arctic slope instabilities.”

The research shows the value of understanding “sticky” cohesive forces in landscape dynamics. A key feature of arctic soil is that it is periodically frozen, producing an evolving mixture of granular material, fluid and actual ice, which is devilishly complex to understand as it shifts and changes over time.

Once set in motion due to slopes and warming temperatures, the soil movement, called solifluction, tends to produce distinctive spatial patterns that can be observed from airplanes, both across the slopes and up and down them. The downhill flow, rather than showing a broad sheet of evenly sliding material, instead forms fingerlike “lobes” of soil reaching out ahead of the main sheet as it moves.

Inspired by fluid instabilities, the research team developed a conceptual model for soil patterns and used mathematical analysis to predict their wavelength. “In particular, we propose that soil patterns arise due to competition between gravity and cohesion or the ‘stickiness’ of soil grains,” the paper’s authors note. “We compare our theoretical predictions with a dataset of soil features from Norway, finding that soil patterns are controlled by fluid-like properties as well as climate.” This has implications for scientists’ understanding of landscapes and complex materials composed of both granular and fluid components.

The team, from Los Alamos, Carlton University and the Massachusetts Institute of Technology, used high-resolution topographic data from more than 3,000 solifluction lobes across 25 sites in Norway, showing that scaling between solifluction wavelengths and slope, lobe thickness, and lobe front angle generally agreed with their theoretical analysis.

Funding: Research conducted under the Next Generation Ecosystem Experiments Arctic (NGEE-Arctic) project funded by the Office of Biological and Environmental Research in the US DOE Office of Science.