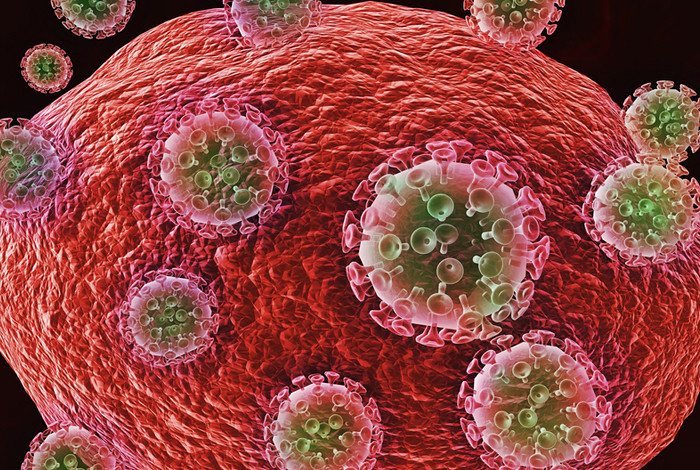 Just in time for World AIDS Day (Dec. 1) international partners are announcing the first efficacy study for an investigational HIV-1-preventive “mosaic” vaccine. Janssen Pharmaceutical Companies of Johnson & Johnson are joining forces with The Bill & Melinda Gates Foundation and National Institutes of Health on this study, and they have enlisted the aid of top researchers worldwide to conduct the trial.

The HIV-1 mosaic vaccine in the trial was originally designed at Los Alamos National Laboratory by theoretical biologist Bette Korber and her team. “My life’s work has been devoted to developing strategies to create a global HIV vaccine; mosaics were a realization of one such strategy,” said Korber. “It was initially very difficult to convince biologists that mosaic proteins, designed by evolving sequences in a computer, could ever lead to a viable vaccine approach. It is hugely rewarding to see this progress being made.”

Historically, the search for an HIV vaccine has been challenging due in part to the virus’s extraordinary diversity. HIV-1 has an ability to mutate rapidly, which results in great global genetic diversity with multiple strains and subtypes prevalent in different parts of the world. Understanding the history, structure and complexity of the viral foe has been key to developing the mosaic vaccine antigens, assembled from natural sequences, which are optimized to achieve coverage of the many different versions of HIV proteins that are circulating. The goal of the mosaic vaccine is to elicit immune responses that can protect a vaccinated person from the world of HIV diversity that they might encounter.

A radical but reasoned approach

Korber noted, “Thanks to experimentalist colleagues who were willing to give this radical but reasoned approach a try, mosaics have come a long way, and they have shown enough promise in monkey trials to merit further testing in people. Now we have to settle in for few more years of suspense as the human trial unfolds. I’m delighted, relieved and a bit astonished that the mosaic concept has come this far,” she said.

The new study, HVTN 705/HPX2008, is known as “Imbokodo,” the Zulu word for “rock,” from a South African saying that refers to the strength of women and their importance in the community. The study will evaluate whether the investigational vaccine regimen is safe and able to reduce the incidence of HIV infection among 2,600 sexually active women in sub-Saharan Africa.

The initiation of the Imbokodo study means that, for the first time in over a decade, two vaccine efficacy studies are taking place at the same time. Another study, HVTN 702, is currently underway in South Africa to evaluate a different vaccine candidate. The new study will be conducted at clinical sites affiliated with the NIAID-funded HIV Vaccine Trials Network.

The mosaic design was based on input that included thousands of HIV sequences kept at the Los Alamos HIV Database, a publicly available international resource funded through the National Institutes of Health. The HIV database holds sequences gathered from scientists all over the world; it currently houses over 800,000 HIV sequences. Mosaic vaccines are computationally designed from protein sequence data that were extracted from this wealth of sequences, and the computer code used to design them was inspired by the way HIV-1 itself naturally evolves. The problem the mosaic code sets out to solve is to design just a couple of sequences that in combination will best capture the global diversity of the virus.

The path to human testing

The path from a vaccine concept to human testing is long. The original mosaic concept was first published in 2007 (Fischer et al. Nat Med. 1:100-6 2007). From there, the computational designs had to be taken from the computer screen into the physical world, being synthesized and tested at the lab bench. Then small animals were immunized to make sure mosaics raised good immune responses. Next monkeys were immunized to see if the vaccine protected them from infection (Barouch et al., Cell. 2013 Oct 24;155(3):531-9) and if the immune responses to mosaic vaccines elicited responses that could cross-react with highly diverse HIV strains.

Under the oversight of Dan Barouch at Harvard, the mosaic vaccine being tested in the Imbokodo passed all of those hurdles. In parallel, the Barouch lab worked continuously on improving the vaccine delivery strategies. Janssen, Barouch and other global partners then took the lead in moving the vaccine into initial human testing to make sure it raised good immune responses and was safe in people. Now, a decade after the concept was first published, enrollment for the first HIV mosaic-based vaccine proof-of-concept study has finally begun; in a few years, researchers will know if a mosaic vaccine can lower the rate of HIV infection among individuals in sub-Saharan Africa.

Nearly two million people become infected with HIV every year, despite recent advances in both HIV treatment and prevention. According to UNAIDS, women and girls account for nearly 60 percent of people living with HIV in eastern and southern Africa.

Bette Korber’s initial funding to develop the concept at Los Alamos National Laboratory came from an internally directed research grant at Los Alamos, but continued over the years under various collaborative NIH grants with Duke and Harvard.