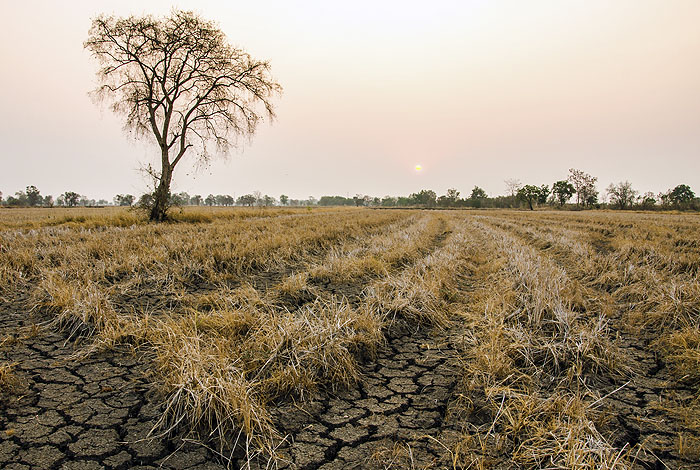 Drought is already the most widespread factor affecting plant production via direct physiological impacts such as water limitation and heat stress. Credit: Dreamstime

LOS ALAMOS, N.M., Nov. 25, 2019—Extreme drought’s impact on plants will become more dominant under future climate change, as noted in a paper out today in the journal Nature Climate Change. Analysis shows that not only will droughts become more frequent under future climates, but more of those events will be extreme, adding to the reduction of plant production essential to human and animal populations.

“Even though plants can, in many cases, benefit from increased levels of carbon dioxide that are predicted for the future atmosphere, the impact of severe drought on destroying these plants will be extreme, especially in the Amazon, South Africa, Mediterranean, Australia, and southwest USA,” said lead study author Chonggang Xu of Los Alamos National Laboratory. Future drought events are typically associated with low humidity, low precipitation, high temperature, and changes in carbon released from fire disturbances.

Drought is already the most widespread factor affecting plant production via direct physiological impacts such as water limitation and heat stress. But indirectly it also can have devastating effect, through increased frequency and intensity of disturbances such as fire and insect outbreaks that release large amounts of carbon back into the atmosphere.

Plants fix carbon dioxide into an ecosystem through photosynthesis, and this process plays a key role in the net carbon balance of the terrestrial biosphere that contributed to its regulation of atmospheric carbon dioxide. And even though higher carbon dioxide concentrations in future decades can help increase plant production, the combination of low soil water availability, heat stress, and disturbances associated with droughts could negate the benefits of such fertilization.

The research team analyzed the outputs from 13 Earth System Models (ESMs) and the results show that due to a dramatic increase in the frequency of extreme droughts, the magnitude of globally-averaged reductions in plant production will be nearly tripled by the last quarter of this century relative to that of the study’s historical period (1850–1999).

For plants living through mild or moderate droughts, the situation is not as dire. The problem is that more of the droughts that come will be the extreme ones. “Our analysis indicates a high risk of increasing impacts of extreme droughts on the global carbon cycle with atmospheric warming,” Xu said, “At the same time though, this drought risk will be potentially mitigated by positive anomalies of plant production associated with favorable environmental conditions.”

Funding: The project was funded by the U.S. Department of Energy Office of Science and the Los Alamos Laboratory Directed Research and Development office.