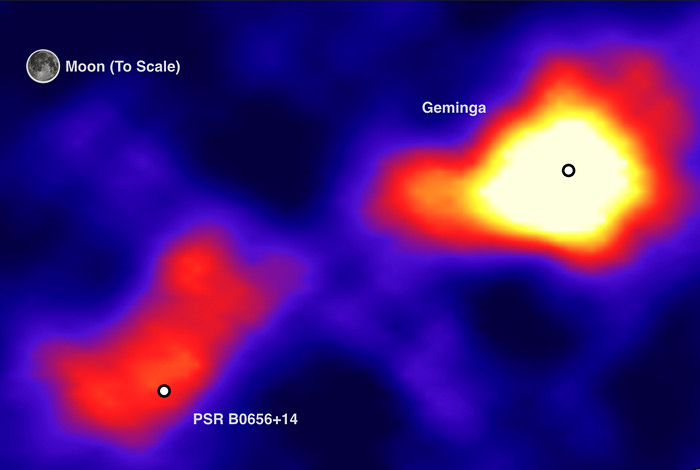 HAWC with its wide field of view sees the pulsars Geminga and PSR B0656+14 as broad beacons of gamma rays that appear much larger in angular extent than Earth’s moon (which is shown for scale). Credit: HAWC

Using new data from the High-Altitude Water Cherenkov (HAWC) Gamma-Ray Observatory in Mexico, researchers have ruled out two pulsars previously believed to be the source of excess positrons just above the Earth’s atmosphere. That leaves the positrons’ origin a mystery that is perhaps explained by dark matter.

“There are a lot more of these positrons than can be explained by any processes that we know about,” said Brenda Dingus, the principal investigator of the U.S. Department of Energy funding for HAWC and a research fellow at Los Alamos National Laboratory. “There has to be some unusual nearby source or sources that creates these positrons.”

Some scientists speculate these extra positrons have an exotic origin, such as yet-undetected processes involving dark matter—the invisible but pervasive substance seen only through its gravitational pull. If the extra positrons do originate from dark matter, HAWC may be able to spot the gamma-ray glow of these dark matter processes through observations of other types of astrophysical sources. Gamma rays are the highest-energy particles of light.

Ruling out pulsars narrows the search for the source. Pulsars are collapsed stars that spin around several times a second and throw off electrons, positrons and other matter with extreme force—so some scientists thought a nearby pulsar called Geminga and another unnamed pulsar might be the sources of the excess of positrons first detected by a satellite in 2008.

However, by catching and counting gamma rays streaming forth from the two pulsars in the first detailed measurements of these pulsars, the HAWC collaboration showed that the two pulsars are very unlikely to be the origin of the positron excess—despite being the right age and the right distance from Earth to contribute.

“HAWC, with its wide field of view, measures the gamma rays made by the positrons as they move away from the pulsar. And we see the positrons are not moving fast enough to make it to Earth,” said Hao Zhou, a scientist at Los Alamos National Laboratory. These results were published November 16 in the journal Science.

From its 13,500-foot perch beside the highest peak in Mexico, HAWC views 15 percent of the sky at any given time. As the Earth rotates, so too does HAWC’s field of view, meaning that HAWC sees up to two-thirds of the sky every 24 hours.

“HAWC provides a unique and complimentary view of the sky to the more pointed gamma-ray telescopes,” says Jordan Goodman, a physics professor at the University of Maryland in College Park and the U.S. spokesman and principal investigator for National Science Foundation funding for HAWC. “Many relatively close-by galactic objects, including these pulsars, appear so extended that you need a wide field-of-view instrument to see them.”

Each of HAWC’s detectors is a huge tank containing 50,000 gallons of filtered water with four light sensors anchored to the floor. When gamma rays smash into the upper atmosphere, they blast apart atoms in the air, producing a shower of particles moving at nearly the speed of light toward the ground. When they strike HAWC’s 300 water tanks, they produce coordinated flashes of blue light—Cherenkov radiation—in the water, allowing researchers to reconstruct the energy and direction of the gamma ray that kicked off the cascade.

Collecting many gamma rays from the same region of the sky allows HAWC to build sharp images of individual gamma-ray sources, such as these pulsars. HAWC sees Geminga as a broad beacon of gamma rays that is more than five times the diameter of the moon. By measuring the size of Geminga, HAWC measures how fast the positrons are moving away from Geminga. Even though these two pulsars are among the oldest and closest to Earth, the positrons aren’t drifting away from the pulsars fast enough to have reached us.

“After excluding two of the main source candidates, we are closer to understanding the origin of the positron excess,” said Francisco Salesa Greus, the lead author of the new paper and a scientist at the Polish Academy of Sciences Institute of Nuclear Physics in Krakow, Poland.

“Dark matter is everywhere, but we don’t know what it is,” Dingus says. “If one could prove that these positrons are from dark matter, then that would be a major step to figuring out the nature of dark matter.”

The paper: “Extended gamma-ray sources around pulsars constrain the origin of the positron flux at Earth,” Science.

The funding: The U.S. National Science Foundation, the U.S. Department of Energy Office of Science, the Laboratory Directed Research and Development program of Los Alamos National Laboratory, and the Mexican National Council of Science and Technology supported this work.