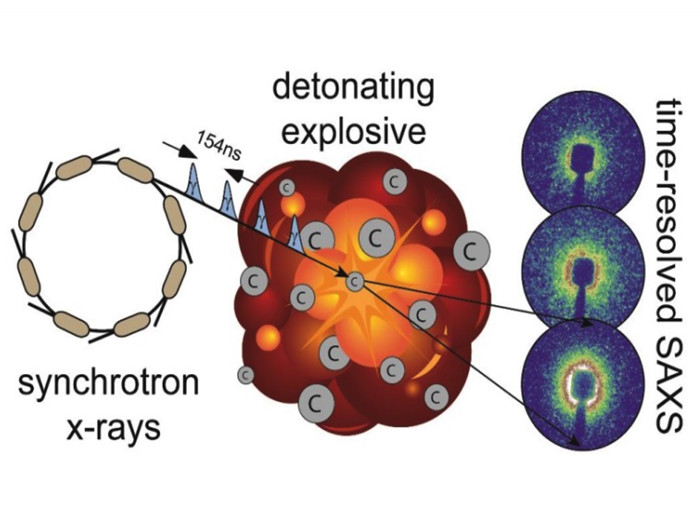 The detonation of carbon-rich high explosives yields solid carbon as a major constituent of the product mixture, and depending on the thermodynamic conditions behind the shock front, a variety of carbon allotropes and morphologies may form and evolve.

“Carbon clusters are produced during the chemical process of detonation in high explosives,” said Dana Dattelbaum, of Explosive Science and Shock Physics Division. “The carbon particle size, shape, composition and their evolution in time helps us understand how explosives deliver energy over a given time frame.”

The research was published in the online version of the Journal of Physical Chemistry (C) in August. Using TRSAXS at the newly-commissioned Dynamic Compression Sector of the Advanced Photon Source at Argonne National Laboratory, researchers from Los Alamos and Lawrence Livermore national laboratories detonated small samples of TATB-based (triamino trinitrobenzene) PBX 9502 while high-brilliance x-rays are scattered by the solid carbon products formed in the detonation. Collaborators also included scientists and technicians from Argonne and Washington State University.

Researchers found that the creation of carbon clusters happens much faster than previously thought, and the composition of the carbon is very different than had been assumed.

“An unexpected and significant finding of this research was the ratio of graphite to diamond inferred by the x-ray contrast from the scattering measurements,” said Dattelbaum. “In detonating TATB-based PBX 9502, we found that approximately 80 percent graphite and 20 percent diamond was formed when we were expecting to see a much higher percentage of diamond-like carbon.”

The products of detonation, the particle size dynamics and type of carbon produced can correlate directly to the type of explosive, and improving computer models of explosive performance, leading to better predictive capability in assuring the safety, security, and effectiveness of the U.S. nuclear deterrent.

Analysis of the x-ray scattering data from TRSAXS revealed rapid initial growth of carbon clusters within 200 nanoseconds behind the shock wave front in the three-gram explosive sample. Analysis of recovered products revealed particle size did not exceed a diameter of 8.4 nanometers and that particle size confirmed that the particle growth did not continue after 200 nanoseconds for this charge size.

“What we’re really trying to do is understand how this process evolves over time,” Said Dattelbaum, “so we can better predict the velocity and energy delivered by a given explosive.”

The research is funded by the National Nuclear Security Administration as part of Science Campaign 2 in support of the Stockpile Stewardship Program. User facilities include the Center for Integrated Nanotechnologies and the Dynamic Compression Sector of the Advanced Photon Source at Argonne.