Nearly one century after the neutron’s discovery, its exact age can unlock answers in physics 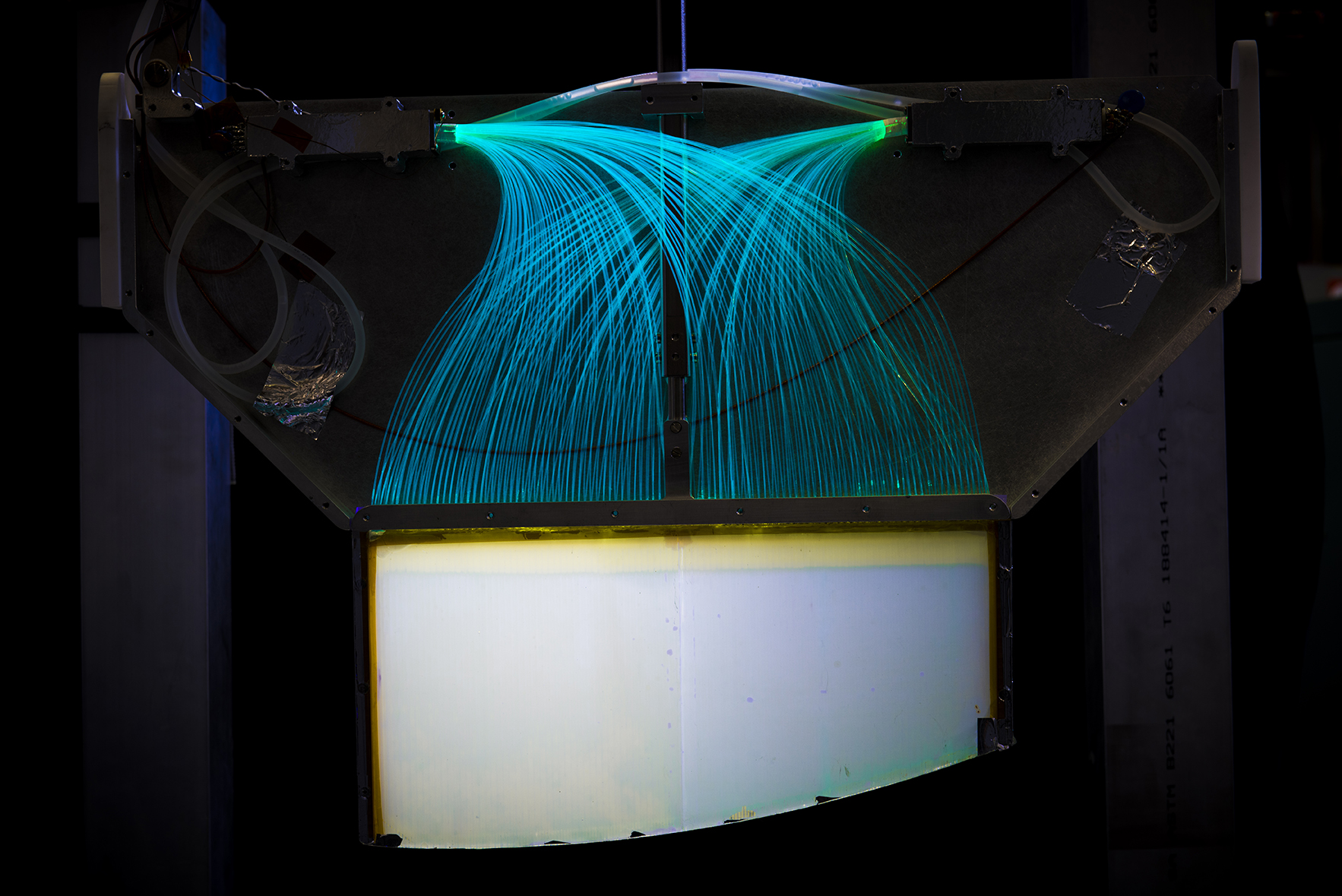 The detector is lowered into the trap to count surviving ultracold neutrons; in this case, the camera flash is producing the glow.

The neutron, one of the three primary particles comprising everyday matter, was discovered in 1932. But despite all the advances in physics in the last 89 years, the exact life expectancy of the neutron has managed to remain elusive, even disputed. An experiment at Los Alamos National Laboratory with twice the precision of previous efforts has now measured the neutron lifetime at 877.75 seconds, with record uncertainty of less than one-tenth of one percent.

The exact lifetime of a neutron has implications for understanding particle physics and cosmology.

Precise measurements of how long a neutron, free of its nucleus, takes to disintegrate can be compared to precise calculations in the standard model of particle physics. The measurement could impact the search for physics beyond the standard model — new particles, dark matter and more. The results, published in the journal Physical Review Letters, could also advance understanding of the abundance of nuclei in the early universe and the formation of elements.

“The results are cleanly related to the underlying standard model of particle physics,” said Steven Clayton, staff scientist in the Nuclear and Particle Physics and Applications group at Los Alamos National Laboratory. “The ability to get these results reflects a novel concept for an essentially lossless trap, and what turned out to be a flexible apparatus that allowed us to evolve the design and push past the original goal.”

Neutrons are difficult particles to corral, and while a 15-minute lifetime may seem short, when seeking to study them at scale, the relatively long timeframe presents many opportunities for the particles to escape and foul the counting — systemic error that can color the results of the experiment. The asymmetric bathtub shape of the UCNtau apparatus represents a departure from previous bottle-shaped experiments, holding a large quantity and significantly limiting the losses from escaping neutrons. The design allowed more than 40 million neutrons to be counted over the period of the experiment, bolstering the probabilistic process to determine the measurement.

To prevent the neutrally charged particles from leaking out through the trap wall, the UCNtau apparatus is covered in more than 5,000 magnets, each a half-inch wide, one-inch deep and two inches long, glued together in a pattern of rotating orientations to make what’s called a Halbach array. With a force 20,000 times stronger than the earth’s magnetic field, the neutrons, themselves each like little magnets, are deflected before they reach the walls and remain where they can be counted.

The detection of the neutrons represents another Laboratory design innovation. Instead of draining neutrons from the bottom of the trap into a collection device and introducing counting error with uneven draining, an in-situ detector sits within the apparatus itself. The Laboratory physics division collaborated with the chemistry division to develop a detector with a 10-nanometer-scale coating of boron-10, which absorbs neutrons, on a fluorescent zinc-sulfide screen. When a neutron is absorbed onto a boron-10 nucleus, the excess energy causes the nucleus to break apart, with at least one of the fragments flying through the zinc-sulfide and producing a flash of light. That light is easily detected, thereby counting the neutron.

The UCNtau experiment also capitalized on sophisticated data collection and analysis. Researchers were divided into three teams, independently and blindly capturing data. The method mitigated bias that could introduce error. Ultimately, the combination of improved analytical methods and advanced equipment resulted in a low degree of systemic error to consider in the calculations.

Pinpointing the neutron lifetime provides data that can be combined with other neutron beta decay data to test the self-consistency of the standard model. Specifically, precision of the neutron lifetime offers an opportunity to understand the Cabibbo-Kobayashi-Maskawa (CKM) matrix, part of the physics theory that describes quarks and their participation in weak interactions. The neutron lifetime can now be combined with other measurements of neutron decay properties to better pin down the dominant term Vud in the first row of the CKM matrix and confirm the unitarity of that piece of the matrix. The precision of Vud from neutron decay measurements is nearing that from nuclear beta decay experiments, which presently show hints of a standard model discrepancy but also require corrections due to the neutrons being tied up in nuclei.

The discrepancy in the lifetime measurement compared to the beam experiment remains, though. Clayton notes that the research team has been doing research and development on a beam-type experiment using ultracold neutrons. The experiment would measure the absolute number of electrons coming off a known population of neutrons (a neutron decays into an electron, a proton and an antineutrino) and shed light on the controversy. Physics beyond the standard model might be a potential outcome.

In the meantime, the research team is upgrading the UCNtau experiment, hoping to improve on the already significant gains in reduced uncertainty. The detector will be upgraded, and the number of neutrons loaded into the trap will be increased, which will enhance the statistical precision of the measurement. Another experiment to measure the electron asymmetry of neutron decay will further help determine Vud from neutron decay. Such results can guide the search for physics beyond the standard model.

The UCNtau work is supported by the U.S. Department of Energy, Office of Science.