Lab physicists once studied science that haunted them 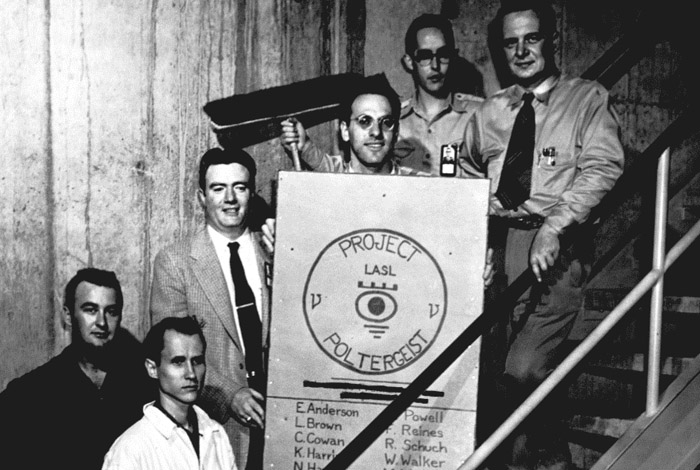 Although Frederick Reines excelled academically at literature and history and was passionate about music and singing, a teacher saw his potential in science.

That teacher offered Reines encouragement — and a key to the science lab so he could work whenever he wanted. Reines’ grades in science began to steadily improve by high school and his response to the yearbook query about his principal ambition was, “To be a physicist extraordinaire.”

Years later, when Reines first contemplated an experiment to detect the neutrino in 1951, this particle was still a poltergeist — meaning it was a fleeting yet haunting ghost in the world of physical reality, according to the Lab’s report “The Reines-Cowan Experiments: Detecting the Poltergeist.” The neutrino’s properties had been deduced, but only theoretically — someone still had to demonstrate its reality.

By 1947, Reines first thought of pursuing evidence for neutrinos (a subatomic particle with no electric charge and a very small mass), which prompted him to ask for a sabbatical-in-residence. Decades later, he recalled, “In 1951, following the [nuclear] tests in Eniwetok Atoll in the Pacific, I decided I really would like to do some fundamental physics. … I moved to a stark empty office, staring at a blank pad for several months searching for a meaningful question worthy of a life’s work. The months passed and all I could dredge up out of the subconscious was the possible utility of a bomb for the direct detection of neutrinos.”

Reines was on a quest to prove the neutrino really existed. Drawing inspiration from past experiences with explosives, he decided to attempt to observe the elusive neutrino and convinced his Los Alamos colleague Clyde Cowan to be his collaborator.

Knowing that atomic explosions emit lots of neutrons that then decay, they first considered using a nuclear bomb. An atomic explosion would provide an excellent source for neutrinos and a chance that the “ghost particle” might become visible. This involved building a sensitive detector and placing it close to an atomic bomb. But how could a detector be built that would be placed 100 meters from “the most violent man-made explosion” and survive?

After much experimentation, Reines and Cowan decided to use the nuclear reactor at Hanford, Washington. This would give them control of nuclear power and allow the experiment to be repeatable. There, they would have the ability to make changes to the atomic nuclei that would yield colossal numbers of neutrinos. Reines and Cowan were then able to detect neutrinos emitted from the reactor by recording their interactions with protons in liquid scintillator.

In 1953, Reines and Cowan built a small prototype detector named Herr Auge (German for Mr. Eye) as part of Project Poltergeist — named for the neutrino’s ghostly nature. This was the first major experimental development to produce statistically significant results.

Sometime into their experiments, they were certain they had observed a free neutrino, but by 1955, Reines and Cowan moved their operation to the Savannah River Plant, which had five fission reactors.

Reines and Cowan were confronted with a colossal challenge: capturing the “most anti-social of particles.” In the summer of 1956, they did.

Not long after their discovery, Cowan left the Los Alamos Lab, followed by Reines, both to pursue teaching.

It wasn’t until 1995 that Reines received the Nobel Prize in Physics for his and Cowan’s experimental work in detecting the first neutrino, called the electron anti-neutrino. Cowan, however, did not share the prize because it is not awarded posthumously (Cowan died in 1974).

An official replica of the prestigious prize is on loan from the Lab’s Bradbury Museum and is on display in the National Security Research Center (NSRC), which is the Lab’s classified library. The official replicas look identical to the originals and are made by the same craftsmen, but are gold-finished bronze rather than solid gold.