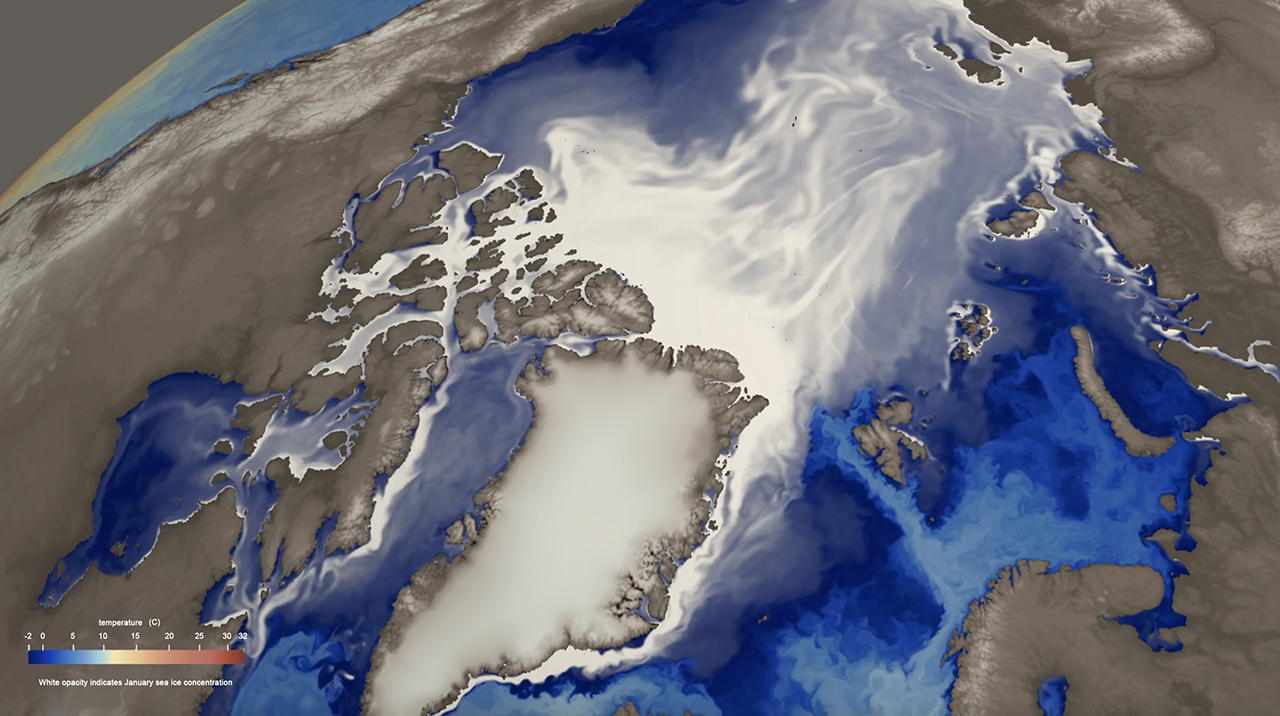 Los Alamos, N.M., Oct. 25, 2021—A new version of the Department of Energy’s Energy Exascale Earth System Model (E3SM) is two times faster than its earlier version released in 2018, allowing for more accurate and timely simulations of the changing climate.

“This version of E3SM is faster and more capable than the first,” said Los Alamos National Laboratory scientist Luke Van Roekel, who co-leads the Water Cycle science campaign for the project.

“From one version to another, earth system models typically become better but also quite a bit slower, so both faster and better is significant. The improved fidelity and increased capability in physics and regional resolution position us to begin answering critical questions related to DOE’s mission.”

The Earth, with its myriad interactions of atmosphere, oceans, land and ice components, presents an extraordinarily complex system for investigation. Earth system simulation involves solving approximations of physical, chemical and biological governing equations on spatial grids at resolutions that are as fine in scale as computing resources will allow.

“E3SM Version 2 allows us to more realistically simulate the present, which gives us more confidence to simulate the future,” said David Bader, a scientist at Lawrence Livermore National Laboratory in California and lead of the E3SM project. “The increase in computing power allows us to add more detail to processes and interactions that results in more accurate and useful simulations than the previous version.”

The new version of E3SM, which was released to the broader scientific community on September 28, includes two new regionally refined configurations that take advantage of the unstructured meshing capability of the ocean and sea ice components of the model. In addition to the standard 30-60km resolution marine mesh, the Southern Ocean is refined to 12km in one new configuration, while North American coastlines and the Arctic are refined to 14km in a second model setup that resolves emerging polar shipping channels.

E3SM Version 2 also includes circulation under Antarctica’s floating ice shelves, which cover an area roughly equivalent to the Greenland ice sheet, and are essential for understanding melt rates of glacial ice associated with changing sea level in a warming climate.

“In this new version of E3SM, we’re leveraging the model’s increased computational performance and variable resolution capability to model Antarctic ice shelf, ice sheet, and Southern polar climate interactions at much higher resolution and more accurately than in the first version,” said Los Alamos scientist Steve Price, lead of the Cryosphere science campaign for the project.

Improved sea ice physics, including the build-up of snow against sea ice ridges, has also been introduced to the model as part of a slew of cryospheric improvements.

The E3SM project is supported by the Department of Energy's Office of Science in the Biological and Environmental Research Office and includes more than 100 scientists and software engineers at multiple DOE laboratories as well as several universities. The DOE laboratories include Argonne, Brookhaven, Lawrence Livermore, Lawrence Berkeley, Los Alamos, Oak Ridge, Pacific Northwest and Sandia national laboratories. In recognition of unifying the DOE earth system modeling community to perform high-resolution coupled simulations, the E3SM executive committee was awarded the Secretary of Energy’s Achievement Award in 2015.