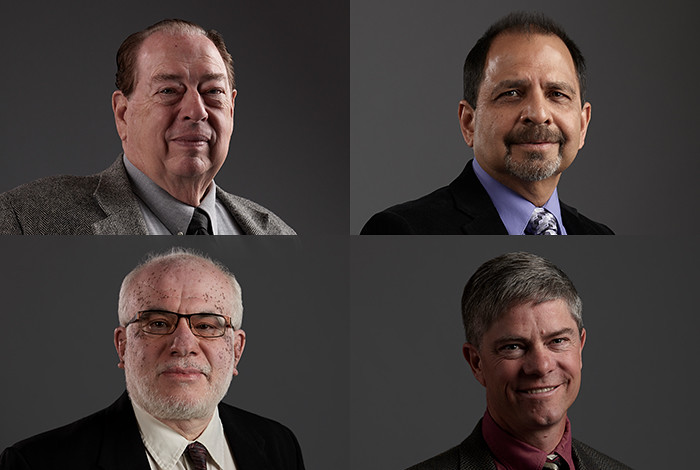 “Becoming a Los Alamos National Laboratory Fellow is one of the highest accomplishments in the Lab,” said Laboratory Director Charles McMillan.  “Each of these scientists has demonstrated sustained high-level achievement in programs of importance to the Laboratory and are recognized authorities in their fields. They have made significant contributions to both Los Alamos and the broader scientific community.”

Donald Burton of the Computational Physics division at the Laboratory is the inventor of computational methods that have become standards in the field and are used all over the world daily in hydrodynamic computations. His codes have been central to the Advanced Simulation and Computing (ASC) program since its inception and have enormously impacted both the nation’s nuclear stockpile stewardship program and the broader scientific community. Burton is the leading inventor for the conservative Lagrangian methods in shock wave compression of condensed matter, has written more than 200 papers and reports, and has served as a mentor to numerous students and postdoctoral researchers.

Stephen Doorn of the Laboratory’s Center for Integrated Nanotechnologies is a world leader in the field of carbon nanotube spectroscopy, establishing the first spectroscopic structure assignments that are universally used today and, more recently, pioneering the development of doped carbon nanotubes as tunable and bright quantum emitters in the near-infrared. In addition to authoring or co-authoring 130 publications with more than 6,500 citations, Doorn has also made important contributions to the leadership of nanoscience at Los Alamos and played a critical role as a mentor to young scientists.

Manvendra Dubey of the Laboratory’s Earth and Environmental Sciences division is internationally recognized for his high-level strategic involvement in climate research that has moved the issue to center stage for Department of Energy program offices and the national laboratory system. The hallmark of Dubey’s work is excellence in conception, execution, analysis, and synthesis; his work has changed the science community’s understanding of aerosol impacts on planetary temperatures. Additionally, Dubey’s work on methane emissions in the Four Corners area has led to new Laboratory programs and highlighted the need for research on methane impacts to the environment.

Turab Lookman of the Laboratory’s Theoretical Division is an expert in the computational physics of materials, complex fluids, and nonlinear dynamics. His recent work on materials design and informatics applies data science to the discovery of materials with new, beneficial properties. Lookman’s work in this field has received enormous worldwide attention. He is co-author of two books and more than 250 publications. Lookman is also the recipient of the 2009 Los Alamos National Laboratory’s Fellows Prize for Outstanding Research and the 2016 Distinguished Postdoctoral Mentor Award. He is a fellow of the American Physical Society.