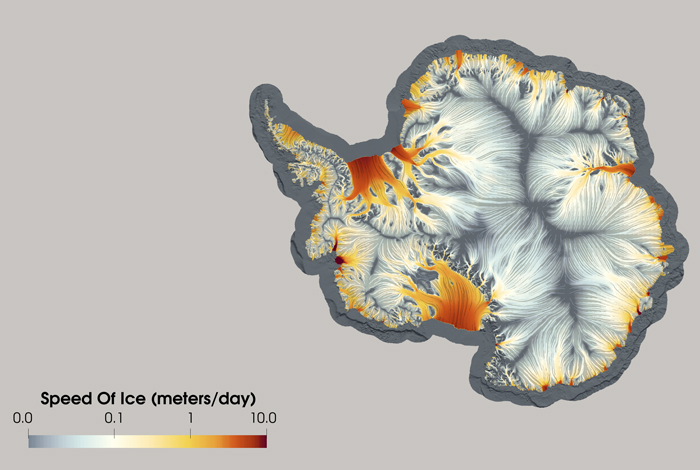 Using the MALI ice sheet model developed by Los Alamos and Sandia national laboratories, researchers simulated the flow of ice across Antarctica. The ice is moving very slowly in the grey and white areas and up to 10 meters per day in the darkest red areas. The lines show the paths of the ice toward the ocean.

LOS ALAMOS, N.M., Sept. 17, 2020—Los Alamos National Laboratory, working with three dozen other institutions from around the world, has helped to create the most accurate prediction of how melting ice in Antarctica and Greenland will contribute to global sea-level rise. The six-year effort, called the Ice Sheet Model Intercomparison Project (ISMIP6), found that by the year 2100, sea levels could rise by as much as 15 inches, from melting of the ice sheets alone. This is in addition to 5 to 26 inches of sea-level rise expected to come from ocean thermal expansion, the melting of mountain glaciers around the world, and changes in storage of water on land.

“In particular, this study helped us understand the importance of ice shelves, the portion of the ice sheet that hangs into the ocean, and that are most susceptible to melt,” says Matthew Hoffman, a glaciologist and climate modeler at Los Alamos. “Ice shelves are like the cork on a champagne bottle holding everything in. If they weaken, then the ice resting on the ground behind them can flow more quickly into the ocean, leading to rapid sea-level rise.”

The ISMIP6 project, led by NASA’s Goddard Space Flight Center, brought together more than 60 scientists focused on melting ice in Antarctica and Greenland, which contain the world’s largest ice sheets. As the atmosphere and ocean warm, ice sheets contribute to sea-level rise when they melt and flow into the ocean more quickly than they grow new ice from falling snow. To assess the effects of a changing climate, the models simulated ice sheet conditions from 2015 to the end of the century, following both extreme and mitigated warming scenarios.

The Laboratory’s work focused on modeling ice changes in Antarctica, using its MPAS Albany Land Ice model (MALI), which was run by Hoffman and Los Alamos scientists Tong Zhang and Stephen Price. Among the 13 models in the project, MALI used the most accurate equations of ice flow and ran at the highest model resolution (each model grid cell representing about one mile of Antarctica), which was enabled by using 6,800 computer processors on Department of Energy supercomputers.

Predicting ice melt in Antarctica was more complicated than for Greenland because of its unique geographic setting. In the continent’s east, the simulations project the ice sheet to grow due to warming air temperatures that produce more precipitation. But in the west, warm ocean currents will erode the base of floating ice shelves at a rapid rate, leading to exceptional ice melt and adding up to 7.1 inches of global sea rise alone. This drastic variation, caused by the uniqueness of Antarctica’s climate and geographic setting, is one factor that has always made modeling ice sheet melt on the continent especially difficult.

“The exciting part of this coordinated project using more than a dozen models and multiple climate scenarios is being able to identify what matters most for possible future ice sheet changes,” Hoffman says. “And the most important factors we found were how rapidly the ocean is able to melt the ice from underneath and the amount of future greenhouse gases in the atmosphere.”

The results of the ISMIP6 collaboration, published this week, appear in a special issue of the journal The Cryosphere. The work is part of the Laboratory’s ongoing research to model the impacts of climate change on sea level.

The research was funded by the Biological and Environmental Research program of the Department of Energy Office of Science. MALI is developed jointly by Los Alamos National Laboratory and Sandia National Laboratories.

Link to special issue: “The Ice Sheet Model Intercomparison Project for CMIP6 (ISMIP6)”
Laboratory scientists contributed to six of the papers in the special issue.