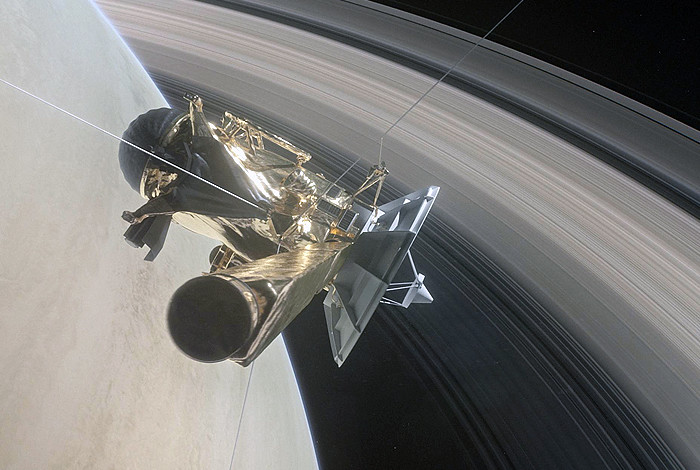 This illustration shows NASA’s Cassini spacecraft about to make one of its dives between Saturn and its innermost rings as part of the mission’s grand finale. Cassini will make 22 orbits that swoop between the rings and the planet before ending its mission on Sept. 15, 2017, with a final plunge into Saturn. CREDIT: NASA/JPL-Caltech

Los Alamos National Laboratory scientists led the development of two scientific sensors on NASA’s spacecraft Cassini that provided key measurements of the space environment around Saturn after its launch in 1997, arrival in 2004 and continuing mission that ends tomorrow, when it will burn up in the Saturn atmosphere. The Laboratory also provided the plutonium heat sources that were part of the spacecraft’s Radioisotope Thermoelectric Generator (RTG) that provided electrical power to Cassini throughout its mission.

“Ultimately, the Cassini mission was about exploring to the very edges of our solar system,” said Terry Wallace, head of Global Security at Los Alamos National Laboratory. “It’s an extraordinarily difficult mission, but one with extraordinary rewards: giving us a glimpse into how our solar system formed and how it operates today. Watching a mission come to an end is always bittersweet, but we’re proud to have been a part of something so successful that will continue to inform our understanding of our universe.”

The two instruments developed by Los Alamos are the ion beam spectrometer, which grew from a space technology that Los Alamos first developed and flew in the 1970s, and an ion mass spectrometer, which featured a completely new design at the time that allowed mission scientists to sort out the composition of the rings and moons orbiting within Saturn’s magnetic influence.

The two sensors were part of the Cassini Plasma Spectrometer, or CAPS, a microwave oven-sized unit that was one of 12 scientific instruments on the two-story-tall Cassini spacecraft. Cassini was a joint effort of NASA and the European Space Agency.

“Developing sensors for spacecraft is something Los Alamos has done since the launch of Vela, the first nuclear treaty monitoring satellite, in 1963,” said Wallace. “The sensors on Cassini were an extension of that work and have led to notable discoveries about Saturn that have really changed the way we view the planet.”

The RTGs produced by Los Alamos that powered the spacecraft are also part of the space power systems aboard the Mars Science Laboratory-Curiosity Rover, Pioneer 10, Pioneer 11, Voyager 1, Voyager 2, Galileo, Ulysses, Cassini and New Horizons. RTGs were also used to power the two Viking landers and for the scientific experiments left on the Moon by the crews of Apollo 12 through 17.

In 2006 Cassini data obtained during a close flyby of the Saturn moon Enceladus found that large amounts of water are spewing into space from the tiny moon’s surface. This water originates near south polar “hot spots” on the moon, possible locations for the development of primitive life in the solar system.

The finding, supported by CAPS measurement, was announced by the Cassini Imaging Science Team in Science magazine and reported in the same issue by a team led by Robert Tokar of Los Alamos National Laboratory.

In addition, in 2012, the Los Alamos sensors on Cassini “sniffed” molecular oxygen ions around Saturn’s icy moon Dione for the first time, confirming the presence of a very tenuous atmosphere. The oxygen ions are quite sparse—one for every 0.67 cubic inches of space (one for every 11 cubic centimeters of space) or about 2,550 per cubic foot (90,000 per cubic meter)—and show that Dione has an extremely thin neutral atmosphere.

“We now know that Dione, in addition to Saturn’s rings and the moon Rhea, is a source of oxygen molecules,” said Robert Tokar, a Cassini team member based at Los Alamos National Laboratory, and the lead author of the paper. “This shows that molecular oxygen is actually common in the Saturn system and reinforces that it can come from a process that doesn’t involve life.”