Up in smoke: the story of the Medio Fire 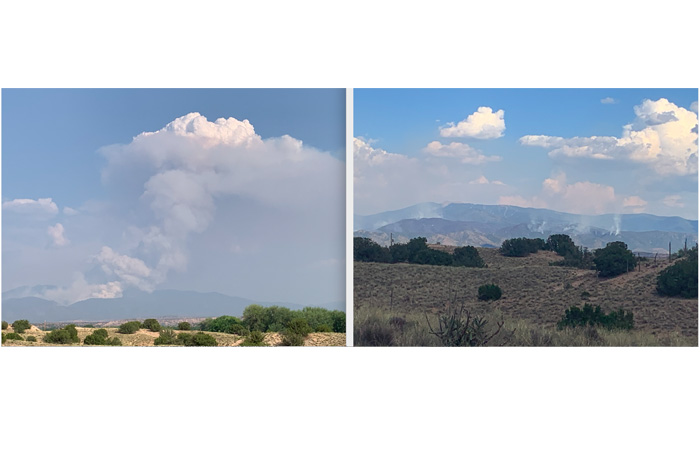 The Medio fire's smoke plume in its early growth phase Aug. 21, and then as it settled and began to die off, Aug. 27. Measurements at Los Alamos National Laboratory's CAFE facility aid in understanding how the aggregate of the smoke’s fine particles, darkness and mass has impacts on human health, local weather, air quality and climate.

LOS ALAMOS, N.M., Sept. 1, 2020—Measurements of wildfire smoke by Los Alamos National Laboratory tell the life story of the Medio Fire, which started in the mountains north of Santa Fe, N.M. Aug. 17 and two weeks later has been damped down by the combination of firefighting efforts and some long-awaited soaking rains. This is the first complete in situ spectroscopic sniffing of fresh fire smoke in real time from “ignition to suppression” of a New Mexico fire. The aggregate of the smoke’s fine particles, darkness and mass determines the impacts on human health, local weather, air quality and climate.

“It began with a high, hot flaming phase that emitted dark, fine soot from the plume that our CAFÉ instrument data clearly showed,” said Los Alamos atmospheric scientist and Laboratory Fellow Manvendra Dubey, who directs the Laboratory’s Center for Aerosol-gas Forensics (CAFÉ). “The flaming, fast-uphill growth and spread, fueled by dry dense conifers, produced a large smoke plume that swung across the region and was first detected by our CAFÉ state-of-the-art smoke composition sensors on Aug. 21 steered by winds from Rio En Medio to Los Alamos” he said.

The CAFÉ in situ observations of fresh smoke allow the development and validation of a fire emission and dispersion model to help issue air quality alerts. For example, prescribed burns to manage fires emit a lot of smoke, and they need to be performed under conditions that minimize community exposure. While the dark soot containing smoke warms the regional and global climate, the white smoke has a cooling effect, and they both suppress rain. Hence, understanding the smoke properties over the fire life cycle of several weeks is key to predicting their local, regional and global impacts.

The Laboratory established the CAFÉ facility on one of the mesas facing the Sangre de Cristo Mountains, catching particles on the breezes that waft across the Española Valley. “Winds blew the early ultra-fine dark soot to our site while the regional background was clean. For locals in the path of this stuff, fine soot’s organic particles are much smaller than the EPA category for fine particles (2.5 microns in diameter) — they can get deep into your respiratory tract and lungs,” he said.

As the fire progressed, Dubey noted, it became very smoky from mixed smoldering and flaming phases, and the higher emissions polluted the entire region over the next few days as it continued to grow. Finally, late on Aug. 24 and early the next days the hard work of firefighters and natural rains paid off and the fire became more contained, emitting hot embers and more diffuse white smoke.

“On Aug. 27, we clearly saw more organics and less soot in the smoke. We also measured a diffuse regional smoke about twice above typical background as the firefighters continued to work to snuff out the fire with engineered burns,” Dubey said. Thundershowers on Saturday, Aug. 29 helped smother the fire but also stopped firefighters’ burnout effort to create breaks. As of Monday, Aug. 31 the fire is at 3,453 acres and 55 percent contained, and measurements of aerosols at Los Alamos now show clean background levels.