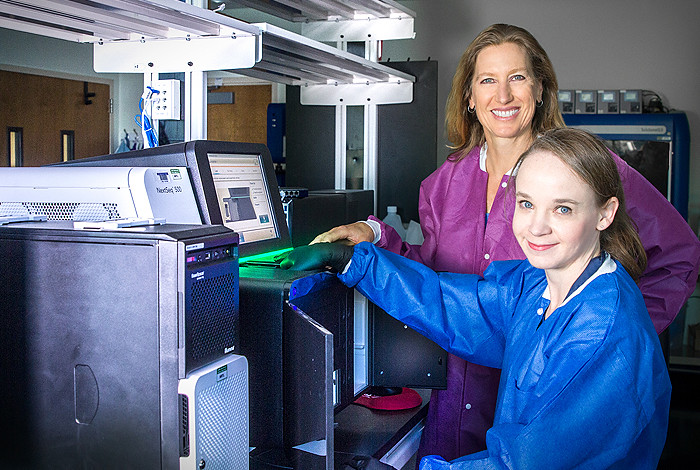 Scientists at Los Alamos National Laboratory are improving the identification of the bacterium that causes tularemia (“rabbit fever”) and considered a “Category A” bioterrorism agent by the Centers for Disease Control and Prevention. At left, principal investigator Jean Challacombe, assisted by Cheryl Gleasner who runs the sequencing machines, and who participated in the sequencing of most, if not all, of the Francisella genomes sequenced at Los Alamos. The device shown is an Illumina NextSeq 500, used in high-throughput sequencing in the laboratory.

Biological “detectives” are tracking down biothreats such as the bacteria that causes tularemia (“rabbit fever”), but they constantly face the challenge of avoiding false positives. Sounding the alarm over a bioattack, only to find it’s a harmless relative in the same genus, reduces credibility and public trust. New work at Los Alamos National Laboratory is narrowing down the confusion over Francisella bacteria, a few species of which include highly virulent human and animal pathogens, fish pathogens, opportunistic human pathogens, tick endosymbionts, and free-living isolates inhabiting brackish water.

“Accurate discrimination among the virulent subspecies of F. tularensis and the environmentally abundant F. novicida and its relatives is absolutely critical for the future success of biological surveillance and attribution activities,” said Los Alamos biologist Jean Challacombe, lead author on a paper out this week in the journal PLOS ONE. Biological surveillance, such as that conducted by the US Department of Homeland Security and the Department of Defense, provides early warning of infectious disease outbreaks, hazardous environmental exposures, or possible bioterrorist attacks by spotting trends of public health importance.

The Francisella genus includes several recognized species, additional potential species, and other representatives that inhabit a range of incredibly diverse ecological niches but are not closely related to the named species. Many of them cause no problems for humans or livestock. F. tularensis, however, is a highly virulent zoonotic pathogen (spreads from animals to humans) that causes tularemia. Because of weaponization efforts in past world wars, it is considered a first tier (most serious) biothreat agent.

The bad one, F. tularensis subspecies tularensis (Type A), is found exclusively in North America and is the most virulent, causing the disease tularemia. It can produce skin ulcers, chest pain and difficulty breathing.

The team has identified several apparently cryptic plasmids—which are linear or circular structures of double-stranded DNA capable of existing outside the chromosome—in the sequenced genomes of three commonly found environmental Francisella species. These plasmids provide additional phylogenetic and genomic features that differentiate pathogenic F. tularensis strains from clinical and environmental near-neighbor species that are not biothreat agents.

“Our work shows that of the more than 120 Francisella genomes that have been sequenced, only a few contain plasmids. This becomes a really useful signpost for researchers, adding genomic features that can prevent misidentification of bacterial relatives that happen to share an otherwise similar genetic profile,” she said. Environmental surveys indicate that F. novicida and similar strains are widely distributed and abundant in diverse environments across the United States, and most importantly, this group appears likely to be a source of environmental false positives for F. tularensis that have occurred in surveillance systems.

To accomplish the analysis, the team sequenced genomes from samples of seawater in the area of Galveston Bay, Texas (F. novicida-like), some human clinical samples (F. novicida AZ06-7470 and F. opportunistica), water from a warm spring (F. novicida) and a form isolated from an air conditioning system (F. frigiditurris). Several of the plasmid-containing Francisella strains were sequenced by the Genome Sciences group in the Bioscience Division at Los Alamos.

“Only a few members of the Francisella genus carry plasmids; these include several F. novicida strains, and we found that all of the plasmids were apparently cryptic, encoding functions potentially involved in replication, conjugal transfer and partitioning, a few functions that could be important to environmental survival, and some hypothetical proteins to which a function could not be assigned,” Challacombe said.

According to the published conclusion by Challacombe and her coauthors Cheryl Kuske and Segaran Pillai, “While bacterial plasmids can carry traits that enhance the survival of host cells and influence bacterial evolution, cryptic plasmids encode few functions other than those needed to replicate and mobilize. With no obvious benefit to the host cells that carry them, cryptic plasmids are somewhat of an enigma. . . Our results comparing the cryptic plasmids in diverse Francisella genomes show that they are also found in clinical isolates. These results provide a new understanding of the phenotypic variability and complex taxonomic relationships among the known Francisella species, and also give us new plasmid features to use in characterizing related species groups.”

There are many cultured Francisella isolates for which we still have no genomic sequence, the researchers point out. It will only be through the sequencing and comparison of many more environmental and near neighbor Francisella isolates that researchers will be able to identify additional genomic features that enable accurately discriminating among the various species groups.

Biosciences have been a strong focus at Los Alamos ever since the early radiation-dose measurement efforts of the Manhattan Project, and the Lab’s Bioscience Division has long been closely involved in biohazard analysis, genetic research and development of such tools and techniques as flow cytometry.