Common phenomenon could be key to understanding mechanism of unconventional superconductivity 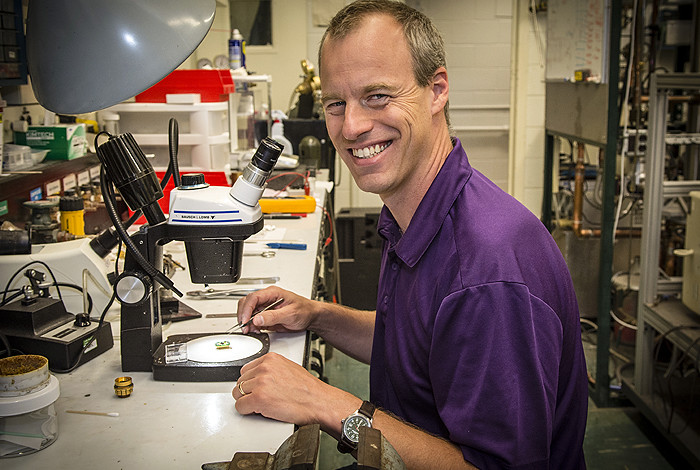 A potential new state of matter is being reported in the journal Nature, with research showing that among superconducting materials in high magnetic fields, the phenomenon of electronic symmetry breaking is common. The ability to find similarities and differences among classes of materials with phenomena such as this helps researchers establish the essential ingredients that cause novel functionalities such as superconductivity.

“These heavy fermion materials have a different hierarchy of energy scales than is found in transition metal and organic materials, but they often have similar complex and intertwined physics coupling spin, charge and lattice degrees of freedom,” he said.

The work was reported in Nature by staff from the Los Alamos Condensed Matter and Magnet Science group and collaborators.

Using transport measurements near the field-tuned quantum critical point of CeRhIn5 at 50 Tesla, the researchers observed a fluctuating nematic-like state. A nematic state is most well known in liquid crystals, wherein the molecules of the liquid are parallel but not arranged in a periodic array. Nematic-like states have been observed in transition metal systems near magnetic and superconducting phase transitions. The occurrence of this property points to nematicity’s correlation with unconventional superconductivity. The difference, however, of the new nematic state found in CeRhIn5 relative to other systems is that it can be easily rotated by the magnetic field direction.

The use of the National High Magnetic Field Laboratory’s pulsed field magnet facility at Los Alamos was essential, Ronning noted, due to the large magnetic fields required to access this state. In addition, another essential contribution was the fabrication of micron-sized devices using focused ion-beam milling performed in Germany, which enabled the transport measurements in large magnetic fields.

Superconductivity is extensively used in magnetic resonance imaging (MRI) and in particle accelerators, magnetic fusion devices, and RF and microwave filters, among other uses.

Funding: Sponsored by the U.S. Department of Energy, Office of Basic Energy Sciences, Division of Materials Sciences and Engineering, the Max Planck Society, and the Deutsche Forschungsgemeinschaft (German Research Foundation). Work at the National High Magnetic Field Laboratory was supported by National Science Foundation Cooperative Agreement no. DMR-1157490, the State of Florida, and the US DOE. M.J. acknowledges support from the IMS Rapid Response program at Los Alamos.