A paradigm shift away from the 3D mathematical description developed by Schrödinger and others to describe how we see color could yield more vibrant computer displays, TVs, printed materials, textiles and more 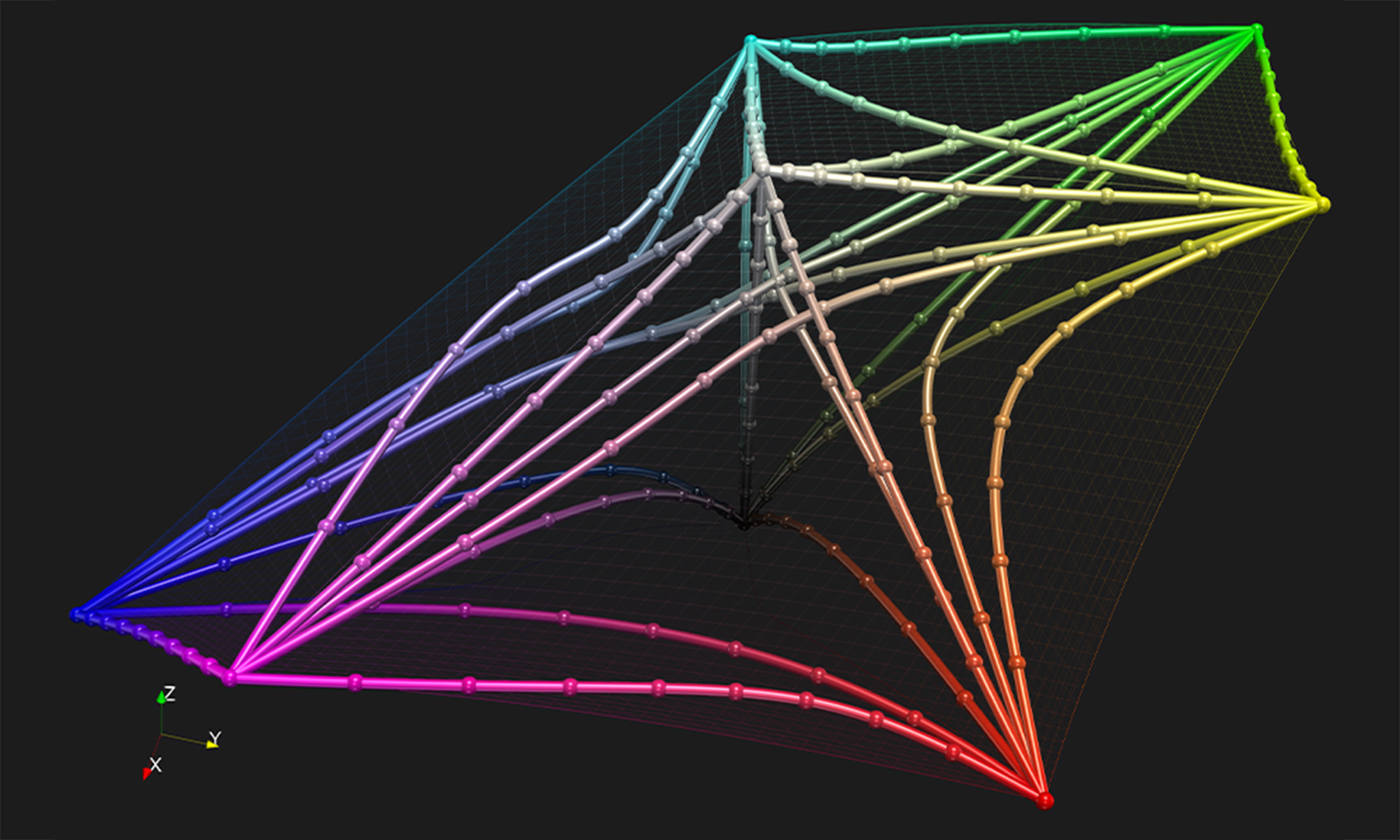 This visualization captures the 3D mathematical space used to map human color perception. A new mathematical representation has found that the line segments representing the distance between widely separated colors don't add up correctly using the previously accepted geometry. The research contradicts long-held assumptions and will improve a variety of practical applications of color theory.

A new study corrects an important error in the 3D mathematical space developed by the Nobel Prize–winning physicist Erwin Schrödinger and others and used by scientists and industry for more than 100 years to describe how your eye distinguishes one color from another. The research has the potential to boost scientific data visualizations, improve TVs and recalibrate the textile and paint industries.

“The assumed shape of color space requires a paradigm shift,” said Roxana Bujack, a computer scientist with a background in mathematics who creates scientific visualizations at Los Alamos National Laboratory. Bujack is lead author of the paper by a Los Alamos team in the Proceedings of the National Academy of Science on the mathematics of color perception. "Our research shows that the current mathematical model of how the eye perceives color differences is incorrect. That model was suggested by Bernhard Riemann and developed by Hermann von Helmholtz and Erwin Schrödinger — all giants in mathematics and physics — and proving one of them wrong is pretty much the dream of a scientist.”

“Our original idea was to develop algorithms to automatically improve color maps for data visualization, to make them easier to understand and interpret,” Bujack said. So the team was surprised when they discovered they were the first to determine that the longstanding application of Riemannian geometry, which allows generalizing straight lines to curved surfaces, didn’t work.

To create industry standards, a precise mathematical model of perceived color space is needed. First attempts used Euclidean spaces — the familiar geometry taught in many high schools; more advanced models used Riemannian geometry. The models plot red, green and blue in the 3D space. Those are the colors registered most strongly by light-detecting cones on our retinas, and — not surprisingly — the colors that blend to create all the images on your RGB computer screen.

In the study, which blends psychology, biology and mathematics, Bujack and her colleagues discovered that using Riemannian geometry overestimates the perception of large color differences. That’s because people perceive a big difference in color to be less than the sum you would get if you added up small differences in color that lie between two widely separated shades.

“We didn’t expect this, and we don’t know the exact geometry of this new color space yet,” Bujack said. “We might be able to think of it normally but with an added dampening or weighing function that pulls long distances in, making them shorter. But we can’t prove it yet.”