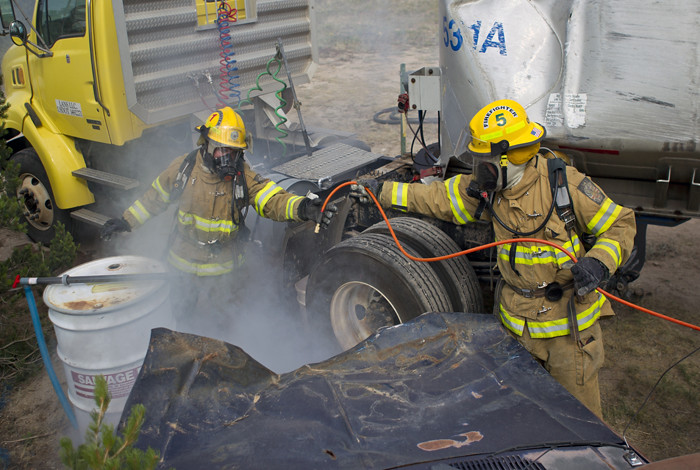 Emergency responders taking part in exercises during the Hazmat Challenge.

Nine hazardous materials response teams from New Mexico, Oklahoma and Nebraska will test their skills in a series of graded exercises at the 22nd annual Hazmat Challenge Aug. 13-17 at Los Alamos National Laboratory.

“Recent expansion and improvements to our Emergency Response Training Center will allow us to increase the variety and complexity of the response scenarios during the challenge and other training events,” said Jeff Dare, group leader for Los Alamos National Laboratory’s Emergency Response group. “We have added training structures to include a grocery store, a medical clinic, a gas station, and a motel, and we have expanded the rail yard and added four railcars.”

For more than 20 years, Hazmat teams have joined the challenge for a chance to network with one another, practice technical skills and learn new techniques under realistic conditions in a safe environment.

Vehicles, trucks, railcars and a variety of other props are used to mimic real-life hazardous material situations. Past scenarios have included drug laboratory or chemical hazard identification, confined space rescue, gas leaks, a pressurized drum opening and an exercise involving an overturned tanker.

About the Hazmat Challenge

The Laboratory began the Hazmat Challenge in 1996 to hone the skills of its own hazmat team members. The event now offers a comprehensive training opportunity in a competitive format that is open to all hazardous materials response teams in New Mexico and across the nation. The winning team receives a traveling trophy and top-scoring teams in the technical categories are awarded permanent trophies. Separate trophies will be awarded to the three top scoring teams in the obstacle course event. Funding for New Mexico teams is provided through federal grants through the New Mexico Department of Homeland Security and Emergency Management (NMDHSEM).

A video about the 2008 and 2012 Hazmat challenges is on the Laboratory’s YouTube channel.