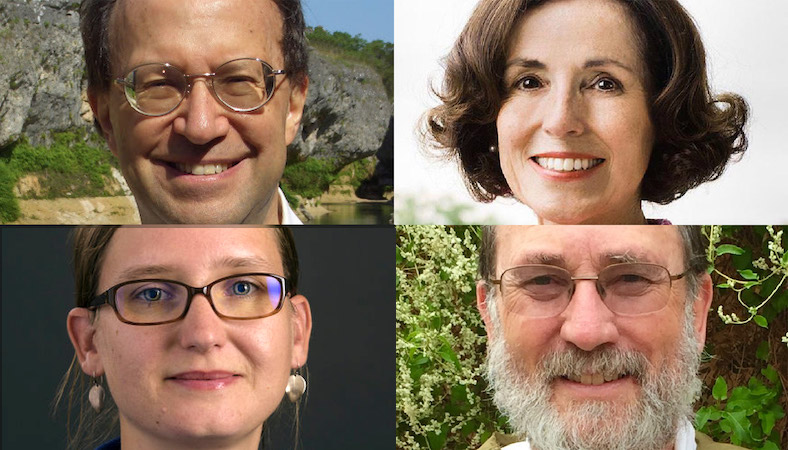 The annual J. Robert Oppenheimer Memorial Lecture will focus on the near and long-term outlook for our planet as climate change continues, and what scientific and political actions can we take to slow the advance of climate change. Moderator Bill Press (upper left) will lead the discussion with panelists France A. Córdova (upper left), Alexandra Jonko (lower left) and David Gutzler.

What will the planet look like in 20 years and what actions can we take now? These will be the topics during a panel discussion at the 2021 J.R. Oppenheimer Memorial Lecture to be held Wednesday, Aug. 11, at 7 p.m.

The hybrid event, “There is No Planet B: A Call to Address Climate Change,” is being hosted jointly by the J. R. Oppenheimer Memorial Committee and the Pajarito Environmental Education Center. The event will have an in-person component for scholarship students being honored by the Committee, and the public can attend the event virtually through Zoom. Registration is required in advance to receive the meeting link and password. Click here to register for the event.

The three-panelist discussion will be moderated by Professor William Press, a Senior Fellow Emeritus at LANL and the Warren J. and Viola Mae Raymer Chair in the Department of Computer Science and the School of Biological Sciences, Integrative Biology Section at the University of Texas–Austin.

Panelists will share their views on such questions like the near and long-term outlook for our planet as climate change continues, and what actions can be taken to slow the advance of climate change.

There will be an opportunity for both in-person and Zoom audience members to ask follow-up questions of the panelists to learn more about this important and pressing topic, which affects every one of us as well as those in future generations.

How to register for the event

Click here to register for the event. The Zoom event is free and open to the public.

More information about the event panelists:

Panelist: France A. Córdova is the President of the Science Philanthropy Alliance and former Director of the National Science Foundation (NSF). She has served in five presidential administrations and is an internationally recognized astrophysicist for her contributions to space research and instrumentation. In addition to being the 14th NSF Director,  she co-chaired with other agency heads several White House committees of the National Science and Technology Council. She has spoken before the U.S. Congress and on global stages including the Global Research Council, Arctic Ministerials, and the World Economic Forum. She is the only woman to serve as President of Purdue University and she is also Chancellor Emerita of the University of California, Riverside, where she was a Distinguished Professor of Physics and Astronomy. Previously, Córdova served as NASA's Chief Scientist, representing NASA to the larger scientific community. She has been awarded several honorary doctorates, including ones from Purdue, Duke and Dartmouth Universities.

Panelist: David Gutzler retired from the teaching faculty at the University of New Mexico in 2020 and now holds the title of Professor Emeritus. His UNM research group has emphasized the application of observed climate data and model output to evaluate the causes and impacts of global and regional climate variations, and to improve the skill and usefulness of climate and hydrologic projections across Southwestern North America on seasonal and longer time scales. He has served as editor of the American Meteorological Society’s Journal of Climate and is an AMS Certified Consulting Meteorologist. He was a lead author for the U.N. Intergovernmental Panel on Climate Change's fifth Assessment Report (2013) and now serves in the same capacity for its sixth Assessment Report, currently in revision for release in early 2022.

Panelist: Alexandra Jonko is a Research Scientist and Leader of the Applied Terrestrial, Energy, and Atmospheric Modeling Team at LANL. Jonko’s research centers on the use of computational models and analysis to understand climate and atmospheric processes from global-scale radiative climate feedbacks to the effects of micro-scale turbulence on the movement of a wildfire. Her position at LANL has afforded her the opportunity to apply physics-based atmospheric modeling to a wide range of problems relevant to both climate science and global and national security, including regional impacts of current and future climate change, especially on wildfire, and improved explosion monitoring and verification.

Moderator: William H. Press is the Leslie Surginer Professor of Computer Science and Integrative Biology at the University of Texas at Austin and also a Senior Fellow (emeritus) at the Los Alamos National Laboratory (LANL). From 2009 to 2017, Press was a member of President Obama’s Council of Advisors on Science and Technology. He is a past president of the American Association for the Advancement of Science (AAAS). He is currently the elected treasurer of the National Academy of Sciences and is a member of the Governing Board of the National Research Council. For more than two decades, Press was Professor of Astronomy and of Physics at Harvard University.