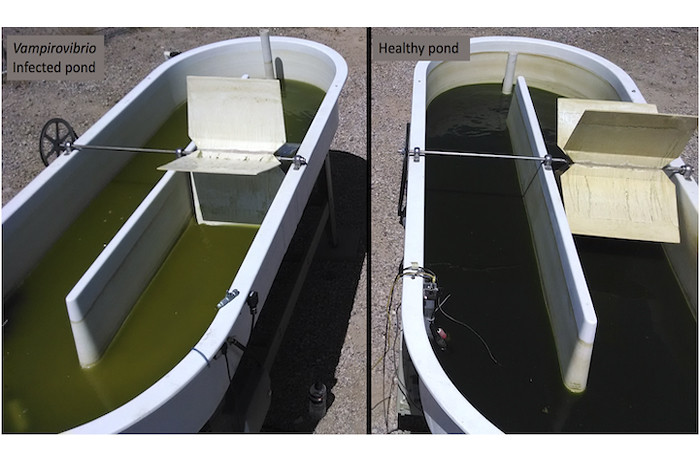 New DNA analysis has found genetic diversity in Vampirovibrio chlorellavorus, complicating efforts to protect algae ponds and the biofuels industry from this destructive pest. The predatory bacterium sucks out the contents of the algae cells, ultimately transforming a productive green algae pond to a vat of rotting sludge. Credit: Seth Steichen and Judith K. Brown, Plant Sciences, University of Arizona

LOS ALAMOS, N.M., July 22, 2019—New DNA analysis has revealed surprising genetic diversity in a bacterium that poses a persistent threat to the algae biofuels industry. With the evocative name Vampirovibrio chlorellavorus, the predatory pest sucks out the contents of the algae cells (thus the vampire reference) and reduces a productive, thriving, green algae pond to a vat of rotting sludge.

“DNA sequences show what are likely different species, suggesting a much larger diversity in this family than we originally assumed,” said Blake Hovde, a Los Alamos National Laboratory biologist. “That means the treatment for one algae pest might not work for another, which can be a big problem for large-scale algae cultivation in the future.”

The research team sequenced two strains of Vampirovibrio from the same pond. The two samples collected one year apart came from an outdoor algae cultivation system in the Sonoran Desert of Arizona run by University of Arizona collaborators Seth Steichen and Judith Brown. The team sequenced and analyzed the genomes to identify the genes involved in predation, infection and cell death of the valuable Chlorella algae that the bacterium targets.

“Our genomic analyses identified several predicted genes that encode secreted proteins that are potentially involved in pathogenicity, and at least three apparently complete sets of virulence (Vir) genes,” Hovde said. Those genes are characteristic of bacteria that carry out cell invasion.

With Chlorella algae valued as a key source of harvestable biomass for biofuels and bioproducts, it is extremely useful to be able to enhance the fundamental understanding of interactions between a unique bacterial pathogen and its green algal host, Hovde noted. The results of this research have direct relevance to the success of large-scale commercial algal production projects underway to advance U.S. energy security (biofuels) and the production of aquaculture feedstocks and algal-based nutraceuticals.

For future work, the team is following up with a project with the Joint Genome Institute to characterize six more pest genomes from the same family to see if the diversity of these organisms continues to expand, or if the researchers can start categorizing these pests into species groups.

Funding: This project is a collaboration between Los Alamos National Laboratory and the University of Arizona. The work was funded by the U.S. Department of Energy, Office of Energy Efficiency and Renewable Energy, Bioenergy Technologies Office.