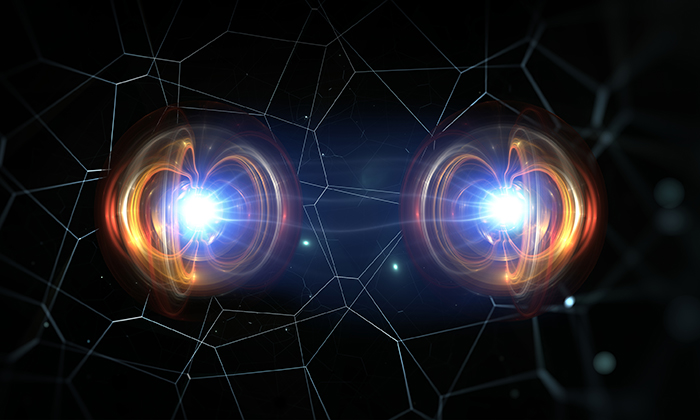 One cool aspect of quantum computing is that the computers themselves—even the near-term, noisy, small-capacity ones available today—can serve as experimental testbeds for research into physical quantum systems. To that end, theoreticians and computer scientists at the Laboratory are applying their expertise in quantum algorithms to developing quantum sensors and making predictions about experimental data to help guide research into quantum materials.

Algorithms, quantum materials, and quantum sensing are all part of Los Alamos’ focus areas under the Quantum Science Center, so it only makes sense to exploit the research synergies.

The Laboratory leads one of three major research thrusts in a collaboration charged by the Department of Energy with developing quantum technologies as part of the $115M Quantum Science Center (QSC). Headquartered at Oak Ridge National Laboratory, the QSC’s research goals are organized around three scientific thrusts — quantum materials discovery and design, quantum devices and sensors for discovery science, and quantum simulations and algorithms.

In one research vein at the Lab, Marco Cerezo (Physics of Condensed Matter & Complex Systems) and others are using their recent breakthroughs in quantum algorithms to expand the budding field of quantum sensing. Quantum sensors can be exquisitely sensitive—far better than classical sensors—in measuring magnetic fields, detecting photons for quantum cybersecurity, and potentially detecting gravitational waves, to name a few applications.

It turns out the best place to explore quantum sensing might be a quantum computer.

A quantum sensor uses a quantum system such as entangled atoms or particles of light (photons) to learn a parameter of the source—a magnetic field, for instance—to be measured.

If the target being measured is a very weak magnetic field, the quantum entanglement in the quantum state in the sensor can be used to amplify the sensitivity of the particles to the field. Then the field strength can be “recorded” and later measured from the sensor. In this case, using the particles in an entangled, collective state makes them far more useful as a quantum sensor than the sum of the sensing capabilities of each individual particle.

Quantum computers rely on entanglement to perform operations. One of the challenges in developing algorithms on current, noisy quantum computers stems from the quantum system inside the computer interacting unintentionally with the surrounding environment. That interferes with computation.

While sensitivity to interactions with the environment is a major problem in quantum computation, it’s just what you want from a quantum sensor. The Los Alamos work is seeking to turn this flaw into a useful trait for studying sensors.

“You want a sensor to interact with the environment in a very controlled way,” said Cerezo, a physicist specializing in quantum computing, quantum machine learning, and quantum information.

The work would likely please Richard Feynman, the Nobel laureate physicist who worked at Los Alamos on the Manhattan Project during World War II. Feynman jump-started the field of quantum computing in a 1981 speech, proposing that quantum computers could be developed to serve as the natural platform to simulate quantum systems.

Feynman was the first to point out that, on a classical computer, the computational memory required grows exponentially as the quantum system being simulated grows. Each time you add an electron, for instance, to the simulation, the simulation doubles in size, eating up bytes. On a quantum computer, however, adding an electron only requires adding one more qubit. Thus, simulations are far more scalable on quantum computers.

Quantum computers seem the ideal platform for testing the predictivity of simulations of neutron scattering in topological systems, but on current, near-term quantum hardware, as simulations run, they become too noisy to produce results—the familiar bugaboo of losing quantum coherence in quantum computing.

At Los Alamos, Zӧe Holmes (Information Sciences) and others have recently developed a new type of algorithm, called variational fast forwarding (VFF). A hybrid approach that combines classical and quantum computing to get around the noise problem, VFF sacrifices a little bit of accuracy in calculations to achieve far longer run times and allows simulations to complete without crashing.

“We’re interested in applying VFF to topological systems where classical computers won’t cut it, and where a naïve quantum-computing approach can only simulate for so long within the computer’s coherence time,” Holmes said. “Our algorithms seek a way around that.”

The next step is to apply VFF to magnetic materials, and in particular topological systems. The Los Alamos team has joined with other QSC researchers at Purdue, UC Berkeley, Oak Ridge, IBM and Microsoft to push the capabilities for performing predictive quantum simulations of topological systems. This large project, headed up by Arnab Banerjee at Purdue, exploits synergy between Los Alamos’ research into quantum simulation with broader QSC expertise in both theoretical and experimental aspects of topological systems to bring the unique advantages of quantum systems to bear on important technological applications.