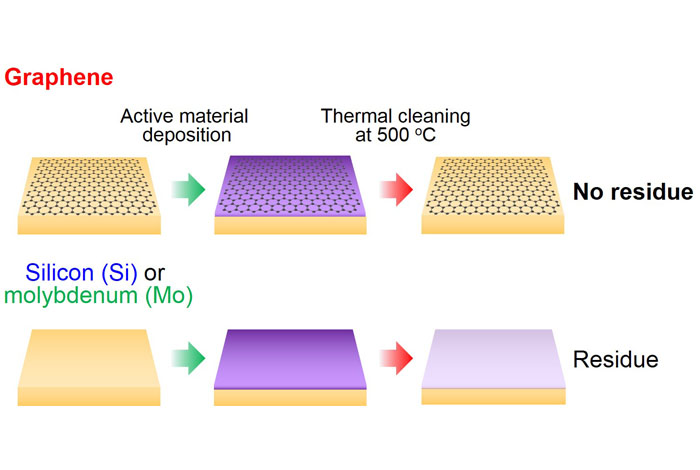 An added layer of graphene allows photocathode substrates to be cleaned and reused repeatedly in place inside electron microscopes and accelerators.

LOS ALAMOS, N.M., June 30, 2020—Photocathodes that produce electron beams for electron microscopes and advanced accelerators can be refreshed and rebuilt repeatedly without opening the devices that rely on them, provided the electron emitting materials are deposited on single-atom-thick layers of carbon known as graphene, according to a new study published in the journal Applied Physics Letters.

“The machines that rely on these electron emitters typically operate under high vacuum,” said Los Alamos National Laboratory physicist Hisato Yamaguchi. “By choosing graphene over materials like silicon or molybdenum, which tend to degrade during use, we can clean the substrate and redeposit electron-emitting materials without opening the vacuum. This can dramatically reduce downtime and labor involved in replacing photocathodes.”

The researchers studied photocathodes made of cesium potassium antimonide, which efficiently emit electrons when illuminated with high-power, green laser light. The photocathode efficiency falls with use, and the photocathodes must be either replaced or renewed with the electron-emitting material baked off and replaced in situ. When the researchers renewed photocathodes on substrates of silicon or molybdenum, which are common materials for such devices, the photocathode performance degraded with each cycle. Following the same procedure with graphene serving as the substrate resulted in uniformly high electron emission, time and time again.

The researchers proposed that the resilience of photocathodes deposited on graphene surfaces was due to weaker binding between the emitter atoms and the underlying carbon layer. Numerical calculations based on the material properties of the emitters and graphene were consistent with the hypothesis.

The authors concluded their study by stating, “Our results provide a foundation for graphene-based, reusable substrates for high [quantum efficiency] semiconductor photocathodes.”

The research was published June 22 in the journal Applied Physics Letters.