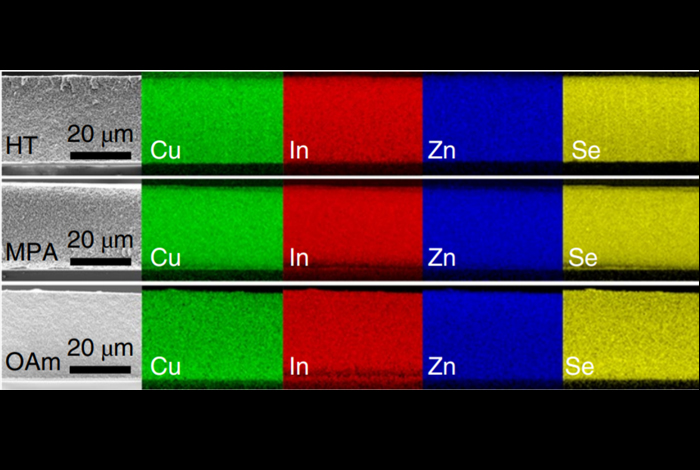 Scanning electron microscope image of electrodes infiltrated with quantum dots (left) and the corresponding distributions of copper, indium, zinc, and selenium across the film thickness.

LOS ALAMOS, N.M., May 18, 2020—Novel quantum dot solar cells developed at Los Alamos National Laboratory match the efficiency of existing quantum-dot based devices, but without lead or other toxic elements that most solar cells of this type rely on.

“This quantum-dot approach shows great promise for a new type of toxic-element-free, inexpensive solar cells that exhibit remarkable defect tolerance,” said Victor Klimov, a physicist specializing in semiconductor nanocrystals at Los Alamos and lead author of the report featured on the cover of the journal Nature Energy.

Not only did the researchers demonstrate highly efficient devices, they also revealed the mechanism underlying their remarkable defect tolerance. Instead of impeding photovoltaic performance, the defect states in copper indium selenide quantum dots actually assist the photoconversion process.

Quantum dots have already found many uses, and more are coming. In particular, they are very efficient light emitters. They are distinct from other types of light-emitting materials, as their color is not fixed and can be easily tuned by adjusting the quantum dot size. This property has been utilized in displays and televisions, and soon will help make more efficient, color-adjustable light bulbs.

The unique physics of nanosized semiconductor crystals prepared by colloidal synthesis has fascinated scientists for decades. Due to their extremely small sizes – a few nanometers across – the properties of the nanocrystals can be manipulated at the most fundamental quantum-mechanical level. Hence, they are called “quantum dots.”

Size tunable properties of quantum dots can also help efficiently capture sunlight, which is of great use in solar-energy conversion. The efficiencies of modern quantum dot solar cells rapidly approach those of traditional thin-film photovoltaics. However, in most cases they contain highly toxic heavy metals such as lead and cadmium, which limits their practical utility.

Los Alamos researchers described new, high-efficiency quantum dot solar cells that were free of any toxic elements. The team used a reaction of copper, indium, and selenium, with the addition of zinc to make zinc-doped quantum dots. The dots were incorporated into voids of a highly porous titania film which served as a charge collecting electrode.

Incident solar photons were absorbed by the quantum dots, which resulted in the release of tightly bound electrons into a high-mobility conduction band. These electrons were then transferred to the titania electrode which ultimately produced a photocurrent.

“We were pleasantly surprised by the results of the measurements of our devices,” Klimov said. “Due to their very complex composition (four elements are combined in the same nanosized particle), these dots are prone to defects. Despite these imperfections, they showed nearly perfect performance in our solar cells—per each 100 absorbed photons we detected 85 photogenerated electrons, implying that the photon-to-electron conversion efficiency was 85 percent.”

Funding: The studies of quantum dot photophysical properties and charge transfer at quantum dot interfaces were supported by the Office of Science, U.S. Department of Energy. The research into quantum dot synthesis and device fabrication was funded by the Laboratory Directed Research and Development program of Los Alamos National Laboratory under project number 20190232ER.