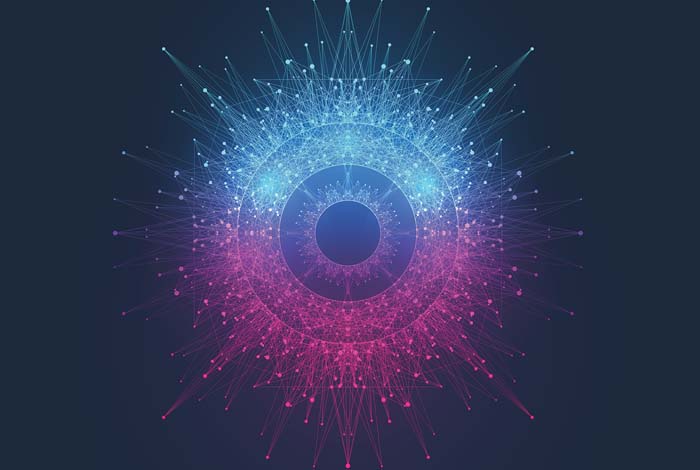 A new theorem shows that information run through an information scrambler such as a black hole will reach a point where any algorithm will be unable to learn the information that has been scrambled.

LOS ALAMOS, N.M., May 12, 2021—A new theorem from the field of quantum machine learning has poked a major hole in the accepted understanding about information scrambling.

“Our theorem implies that we are not going to be able to use quantum machine learning to learn typical random or chaotic processes, such as black holes. In this sense, it places a fundamental limit on the learnability of unknown processes,” said Zoe Holmes, a post-doc at Los Alamos National Laboratory and coauthor of the paper describing the work published today in Physical Review Letters.

“Thankfully, because most physically interesting processes are sufficiently simple or structured so that they do not resemble a random process, the results don’t condemn quantum machine learning, but rather highlight the importance of understanding its limits,” Holmes said.

In the classic Hayden-Preskill thought experiment, a fictitious Alice tosses information such as a book into a black hole that scrambles the text. Her companion, Bob, can still retrieve it using entanglement, a unique feature of quantum physics. However, the new work proves that fundamental constraints on Bob’s ability to learn the particulars of a given black hole’s physics means that reconstructing the information in the book is going to be very difficult or even impossible.

“Any information run through an information scrambler such as a black hole will reach a point where the machine learning algorithm stalls out on a barren plateau and thus becomes untrainable. That means the algorithm can’t learn scrambling processes,” said Andrew Sornborger a computer scientist at Los Alamos and coauthor of the paper. Sornborger is Director of Quantum Science Center at Los Alamos and leader of the Center’s algorithms and simulation thrust. The Center is a multi-institutional collaboration led by Oak Ridge National Laboratory.

Barren plateaus are regions in the mathematical space of optimization algorithms where the ability to solve the problem becomes exponentially harder as the size of the system being studied increases. This phenomenon, which severely limits the trainability of large scale quantum neural networks, was described in a recent paper by a related Los Alamos team.

“Recent work has identified the potential for quantum machine learning to be a formidable tool in our attempts to understand complex systems,” said Andreas Albrecht, a co-author of the research. Albrecht is Director of the Center for Quantum Mathematics and Physics (QMAP) and Distinguished Professor, Department of Physics and Astronomy, at UC Davis. “Our work points out fundamental considerations that limit the capabilities of this tool.”

In the Hayden-Preskill thought experiment, Alice attempts to destroy a secret, encoded in a quantum state, by throwing it into nature’s fastest scrambler, a black hole. Bob and Alice are the fictitious quantum dynamic duo typically used by physicists to represent agents in a thought experiment.

A key piece of the new theorem developed by Holmes and her coauthors assumes no prior knowledge of the quantum scrambler, a situation unlikely to occur in real-world science.

“Our work draws attention to the tremendous leverage even small amounts of prior information may play in our ability to extract information from complex systems and potentially reduce the power of our theorem,” Albrecht said. “Our ability to do this can vary greatly among different situations (as we scan from theoretical consideration of black holes to concrete situations controlled by humans here on earth). Future research is likely to turn up interesting examples, both of situations where our theorem remains fully in force, and others where it can be evaded.