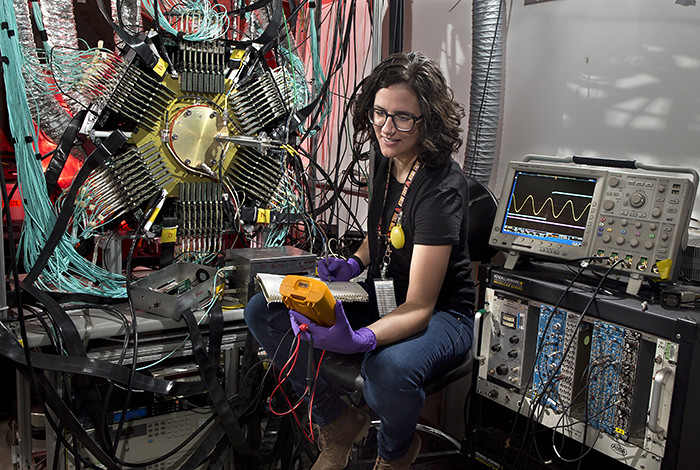 The Laboratory’s increased effort in reaching out to underrepresented minorities in technical careers is paying off.

Los Alamos National Laboratory was named a top employer by four diversity magazines: Woman Engineer Magazine and Minority Engineer Magazine named the Lab as a top 20 government employer; Winds of Change (the American Indian Science and Engineering Society) recognized Los Alamos as one of the top 50 science, technology, engineering and mathematics workplaces for Native American professionals; and Latino Leaders Magazine named Los Alamos one of the top 20 best companies for Latinos in technology.

“Recognition from readers of several magazines targeted to diverse and talented minority groups underscores our commitment to making the Laboratory an employer of choice - particularly for those considering careers at scientific and technical institutions,” said Laboratory Director Charlie McMillan. “We are constantly striving to attract a workforce that resembles our community and the nation as a whole.”

The only national laboratories that earned a spot on the Woman Engineer list of top government employers were Los Alamos (No. 14) and Sandia National Laboratories (No. 17).

Holding the No. 11 spot, Los Alamos was the only national lab to make this year’s Minority Engineer Magazine readers’ choice rankings. The Laboratory has stayed on the top government employer list for three consecutive years. As part of its central mission ensuring the safety and reliability of the nation’s nuclear stockpile, Los Alamos conducts wide ranging, multidisciplinary science and engineering to solve problems of national significance.

A first-time index published in the March-April 2017 issue of Latino Leaders Magazine: The Technology Edition named Los Alamos as one of the top 20 best companies for Latinos in technology, along with companies such as Cisco, Hewlett Packard, Microsoft and Johnson & Johnson on the unranked, alphabetized list.

What stands out about Los Alamos, according to Latino Leaders, is its high percentage of Hispanic workers (almost 38 percent), a demonstrated commitment to recruiting Hispanics at such events as the LatPro Hispanic Diversity Job Fair and women’s Employee Resource Groups that provide mentors and peers to support skills development.

For the second year in a row, the American Indian Science and Engineering Society recognized Los Alamos as one of the top 50 STEM workplaces for Native American professionals. The listings appear in alphabetical order (not ranked) in the spring issue of Winds of Change, a nationally distributed magazine focused on career and educational advancement for American Indians, Alaska Natives and Native Hawaiians.

Los Alamos has several recruitment pipeline programs aimed at recruiting targeted populations of students into STEM fields, particularly engineering. Some of these include the Graduate Fellowship Program, which has several slots specifically for students recruited through the National Consortium for Graduate Degrees for Minorities in Engineering and Sciences, the African American Partnership Program and the Future Female Leaders in Engineering Program.