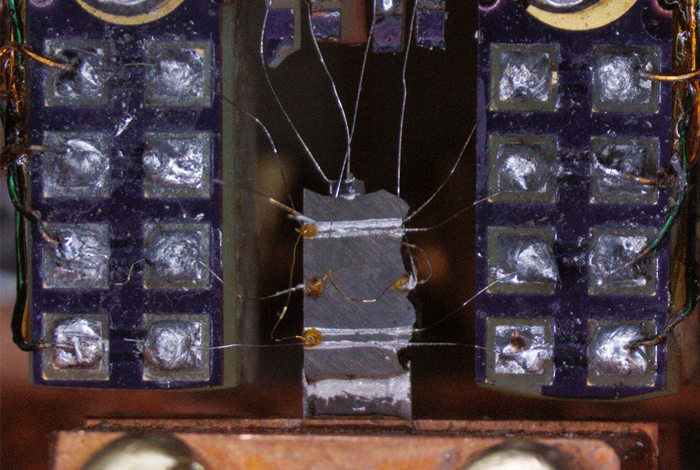 Research published in Science Advances has found that large spin-orbit coupling and strong electronic correlations in a system of uranium-cobalt-aluminum doped with ruthenium resulted in a colossal anomalous Nernst conductivity. Uranium and actinide alloys are promising materials to study the interplay among a material’s topology and strong electron correlations, which could someday have applications in quantum information technologies.

LOS ALAMOS, N.M., March 26, 2021—New research has demonstrated that a magnetic uranium compound can have strong thermoelectric properties, generating four times the transverse voltage from heat than the previous record in a cobalt-manganese-gallium compound. The result unlocks a new potential for the actinide elements at the bottom of the periodic table and point to a fresh direction in research on topological quantum materials.

“We found that the large spin-orbit coupling and strong electronic correlations in a system of uranium-cobalt-aluminum doped with ruthenium resulted in a colossal anomalous Nernst conductivity,” said Filip Ronning, lead investigator on the paper published today in Science Advances. Ronning is director of the Institute for Materials Science at Los Alamos National Laboratory. “It illustrates that uranium and actinide alloys are promising materials to study the interplay among a material’s topology and strong electron correlations. We’re very much interested in understanding, tuning and eventually controlling this interplay, so hopefully one day we can exploit some of these remarkable responses.”

The Nernst response occurs when a material converts a flow of heat into an electric voltage. This thermoelectric phenomenon can be exploited in devices that generate electricity from a heat source. The most notable current example is the radioisotope thermoelectric generators (RTGs) that were developed in part at Los Alamos. RTGs use heat from the natural radioactive decay of plutonium-238 to generate electricity—one such RTG is currently powering the Perseverance rover on Mars.

“What’s exciting is that this colossal anomalous Nernst effect appears to be due to the rich topology of the material. This topology is created by a large spin-orbit coupling, which is common in actinides,” Ronning said. “One consequence of topology in metals is the generation of a transverse velocity, which can give rise to a Nernst response as we observe. It can also generate other effects such as novel surface states that may be useful in various quantum information technologies.”

The uranium system studied by the Los Alamos team generated 23 microvolts per kelvin of temperature change—four times bigger than the previous record, which was discovered in a cobalt-manganese-gallium alloy a couple of years ago and also attributed to these sorts of topological origins.